Who has the right of way crossing a shared pedestrian crosswalk / bike path? (USA)

I pass this intersection (and others like it) at least twice per day on my way to work and I'm still a little unsure who should stop for whom. The little yellow star indicates the "bike path", which is made for bikers and pedestrians to share, but the signs don't mention bikers, instead saying "State Law/Yield/To Pedestrians/In Crosswalk": 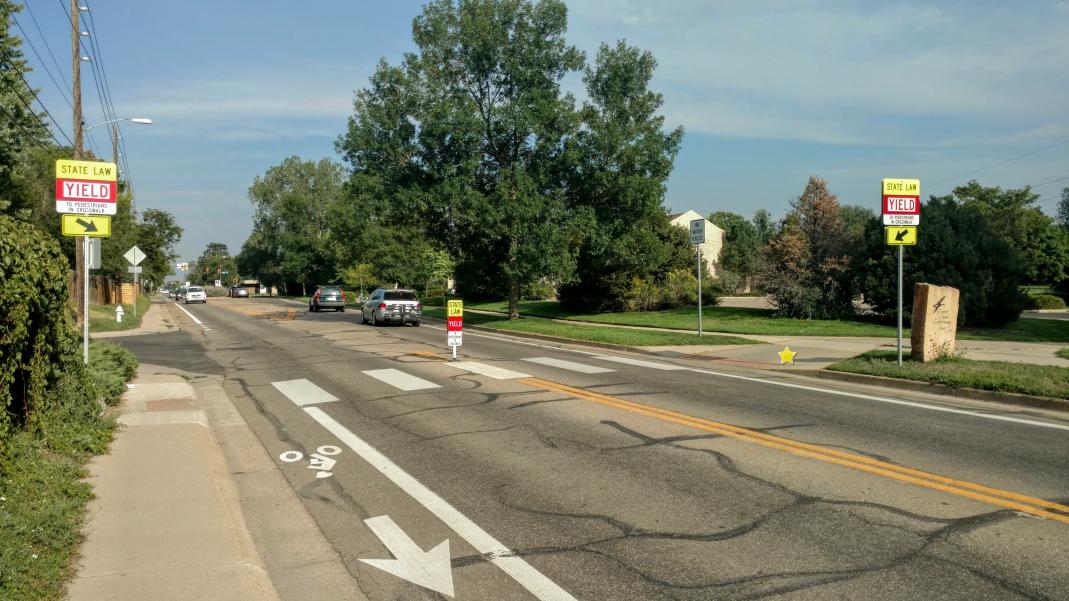 When I'm waiting at the edge of the crosswalk on my bike (it doesn't indicate I should/have to dismount), cars do one of two things:

I don't mind either scenario (I would rather give the car the right of way, personally). Can anyone say definitively what a driver should do when there's a biker (mounted) waiting at the edge of the crosswalk?

The fact that mounted bikers are not considered "pedestrians" is why I'm confused. Pedestrians and unmounted bikers have the right of way without question here, I think, because of the wording of the sign. By the way, this is in Boulder, Colorado, USA, in case this is one of those "varies-by-locality" situations.

This Legal Site, seems to think that when on a pedestrian path, a bicycle rider is a pedestrian.

Unfortunately, not every jurisdiction handles bike riders the same way. But, most states generally observe an interesting hybrid view of bicyclists. When riding on the street, a bicycle is treated much the same as a car. They are generally required to observe all traffic signs, signal turns, and have certain safety features like helmets, reflectors, and/or lights.

When riding on the sidewalk, however, the bike becomes a pedestrian. If in a crosswalk, drivers are supposed to yield to bicyclists. Bicycles are generally allowed to use sidewalks along side those on foot (unless signs state otherwise), though there may be some areas with lanes specified for foot versus bike traffic.

Unfortunately, laws vary not just from one state to another, but also for different municipalities. As a result, it is important to take a moment to become acquainted with your state and local laws regarding the operation of a bicycle. Interestingly, it appears in most states that one can switch from being a pedestrian to a vehicle simply by moving from a sidewalk or bike path to a roadway.

And, for purposes of liability when a car hits someone riding a bicycle, most states treat the cyclist as a pedestrian rather than a fellow driver.

But it also says that different states and municipalities may rule differently on it.

On a personal level, i think that drivers should yield all the same if there is a person in the crosswalk, although i realize this doesn't happen because people are rude and impatient. There are many instances where even standing in a crosswalk does not garnish a stop by oncoming traffic even though it is the law.

Not the answer you're looking for? Browse other questions tagged safety legal or ask your own question.

17
In shared bicycle/pedestrian facilities next to a road, do I obey the pedestrian or the vehicle traffic control devices?
23
Passing cars on the right, and later merging into their lane
8
How can I avoid crashes on my urban commute? Tramlines and CBD sections especially
28
What's the safest way to turn left from a right-side bike lane?
6
Get off bike on crosswalk?
4
Is it OK to use pedestrian phase of pedestrian crossing to join/leave the carriageway? (UK)
11
Right of way for a raised crossing?
52
How can I make it clear to other road users that I'm an inexperienced cyclist?
3
What to look for in bone conduction headphones for bike voice navigation?
3
Idaho Stop: Should I stop at a stop sign when an oncoming vehicle has a stop sign too?