How long should a well maintained chain last and what can I do to prolong its life?

Every evening if it's wet I wipe and re-lube my chain, using ProLink lube. Every weekend I remove the chain, soak it in kero, brush it with a citrus degreaser, allow to dry and then re-lube.

My current chain is 2 months old (about 800km) and is over .75 already so I think I'll replace it this weekend. Mind you, it is winter here and it's been pretty wet most weeks. Also there is a lot of fine sandy grit on the paths I tend to ride.

I read questions like this and am amazed how long people's chains will last. I don't mind replacing the chain often as it's a cheap chain ($15) and I want to protect my chainring and cog.

Is there anything I'm doing wrong with my maintenance regime? Is it surprising that my chain isn't lasting that long? Or is everything okay and I should stop worrying about it?

Update: I relaxed my maintenance regime. I just wiped down and re-lubed occasionally. The chain was very quiet and smooth. However today, after just 20 days and 353 kilometers, it's already over .75!!! I checked the chain guage on a new chain and it is definitely indicating that the new chain is under .75. Why am I burning through chains so fast?

Update: A little about me and my riding. I weigh about 88kg (195lbs). I ride fairly aggressively on bike tracks on the way to work (I almost never get passed). There are some hills so I am reasonably often out of the saddle and pushing pretty hard. I will take the old chain into a bike shop next weekend and let you know what they say.

A new chain has factory installed lube inside on the bushings and pins. It is a thicker, stickier lube than anything you can put back on the chain after a cleaning which is that thorough.

I love that you take time to maintain the bike. Definitely check your chain checker, as Daniel said, but on your next chain, try relaxing the maintenance a bit.

Clean the chain by spraying a light citrus degreaser on a rag, folding the rag in the palm of your hand, and running the chain through the rag. This will clean the exterior and the accessible bits without soaking away the internal factory lube.

Once clean, lube the exterior of your chain with a quality lube (I like Boeshield T-9 or Dumonde Tech yellow) and wait 15-20 minutes. Then wipe off all excess lube.

Starting with your new chain, do that for the first 6 months, or until your fresh lube job sounds unlubed again within a few on the bike hours.

Once that is not working, go back to your current method. I'd say do the complete strip and relube once a month, with the process described above on the in between weeks.

After your next chain, let us know if and how your mileage changed.

A chain can last anywhere from about 500 miles to 5000, depending on the quality of the chain, the sprockets, how the bike is ridden, and the maintenance.

I clean my chain about twice a year, whether it needs it or not, and I get about 2000 miles out of mine. Standard quality SRAMs.

There's also a possibility that you're a bit obsessive about all of this, and as a result have applied too much pressure to the chain stretch gauge and distorted it. You should test your gauge on a new chain, and test one of your removed 0.75 chains at a bike shop, to make sure that your gauge is still good.

One additional concern that hasn't been mentioned is that you should wipe off the chain with a clean rag before lubing as well as after. Lube helps push dirt out of the interior of the chain, but on a dirty chain the effect isn't strong enough to keep out grime. You might be causing premature wear if you're not wiping off the chain before you lube it up.

You might also want to invest in a heavier-duty chain. I use a SRAM PC-7X on my track bike. Fixies will be inherently rougher on your chain, and you want something that's a little beefier than a standard road chain to deal with the additional stresses.

This picture shows a badly hooked (motorcycle) sprocket. Bike sprockets tend to look a little different, but the same idea: 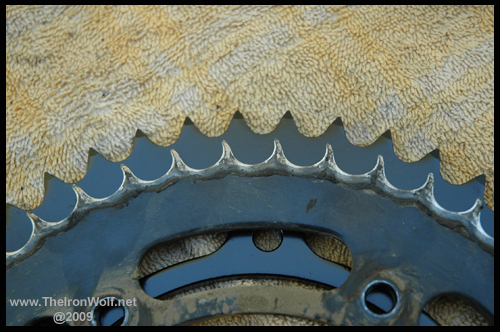 If this were a picture of the rear cluster on a bike (vs a motorcycle sprocket) the front of the bike would be to the right and the direction of pull would be from the right, across the top of the sprocket. As the chain peels off the sprocket at the top of the arc, the "hook" will tend to "hold onto" the chain and cause the "suck" that's been mentioned. For a mildly hooked sprocket a new chain will actually peel off easier than a worn one, but with a more severely hooked sprocket the worn chain will sometimes peel off easier.

Replacing the chain before it's too badly "stretched" minimizes hook (the teeth wear more evenly).

If your chainring or cassette is worn out, they will have "groves" cut into the sprockets that better fit a stretched chain than a new chain. When you put a new chain on a worn drive train, the chain will get stretched to fit into the existing wear pattern.

Regardless of the exact effect of pitch or diameter, a worn-out cassette or chainring can accelerate chain wear. If your chains are wearing faster than you expect, you may need to replace your cassette and/or chainrings.

"Do not run new chain on worn out sprockets because it can cause the chain to wear rapidly. The pitch of the new chain is much shorter than the effective pitch of the worn sprocket (emphasis added), so the total chain load is concentrated on the ﬁnal sprocket toothbefore disengagement." (chains used in this application are fundamentally similar to cycling)

"When a chain is worn beyond its functional limits, it must be replaced. The chain tension will not be spread over several teeth. The tension will be concentrated on the final roller engaging the sprocket. A new chain is also subjected to an impact load as each roler leaves the worn sprocket."

I'm going to take a wild guess that it might be because you don't have fenders: that it doesn't matter how often or how well you maintain your chain, if it's filthy again within 5 minutes of getting on the road.

Also, the usage instructions for your Pro Link lube suggest that you shouldn't be sticking your chain in a solvent: that there's a cleaner built in to the lube itself.

The question relates to a chain on a fixie, i.e. with no derailleur shifting it up and down onto different sized cogs, some of which being ludicrously small 11T or smaller in size.

My 1950's Raleigh Sports Roadster has what I suspect to be the original chain on it. Obviously I did not have the bike from new, however, it has probably done a few miles in its time.

As for my commuter bike, because I did not change the chain when I should have done, I am now deliberately running it into the ground, seeing how long the chain will actually last. It started skipping on the small cog somewhere after the 10000 mile mark and it has recently lost another gear. It also slides off the chainring when on the big cog at the back so it looks like it is rapidly heading to become something like a single-speed or 3-speed. The bushes are distinctly conical shaped and it is probably only the build up of dirt that holds it together. I digress, however a chain can last a very long time and then keep going long after it should have been replaced. You would have to be an idiot though to see exactly how long a chain can last...

I suspect that your cleaning regime is a bit over the top. Kerosene/paraffin is better than gas/petrol however, in the days when I did soak my chain in paraffin I always found it to be slightly 'crunchy' when I put it back onto the bike. The problem being that the grease in the internals has been dissolved away and replaced by what can best be described as oil. Oil is not the right stuff for in there, grease is, and no matter what you do it is not possible to get the grease back in there properly. As a consequence the chain will wear more.

So, effectively, you are damaging the chain! All that hard effort and it is going badly wrong! So, for the next chain, stick it on to a clean set of chainring/cog. Do not add any extra lube. After you wash down your bike put a smidgen of your Pro-link lube on it and no more - any more will attract the dirt and the dirt will wear the chain.

Remember that there are chains out there on 3-speed bikes that have only seen sparing amounts of 'all-in-one' lawnmower oil over a timespan of decades, and that these chains are stretched no more than yours is.

As long as it can till it falls to pieces, no mechanical part will ever fail as an identical one at the same time ever. Prolong it? Don't use it!

Not the answer you're looking for? Browse other questions tagged maintenance chain or ask your own question.

9
Should a chain be replaced even if it's not stretched?
3
Why is my drivetrain so noisy after replacing the chain?
1
Adjusting rear derailleur

12
Will using dry lube and wet lube together give you better protection/performance than from using just one of them?
4
Squeaking sounds after lubricating the cogset and chain
14
What's the point of removing the excess oil after lubing the chain?
9
Alternative Chain/DriveTrain DeGreasers
16
Minimal effort chain cleaning
7
I live in a place where it frequently floods. How can I keep my chain from rusting?
6
I shortened my chain, is this bad?
6
Is it possible to over-clean a bike chain?
1
Premature chain wear GX Eagle
17
How does one wipe clean and oil the chain? (maintenance details)