I have a bike with drop bars which I need for commuting, but I live in a city which is not only full of idiots† both on foot and on bikes themselves (thus meaning going bellless is idiotic), but also full of broken paths and cobblestones.

I've now lost two bells due to them vibrating enough to the point of coming apart — I try to screw them together after every few rides, but at some point they just come apart while riding and I lose the bits needed to put them back together: 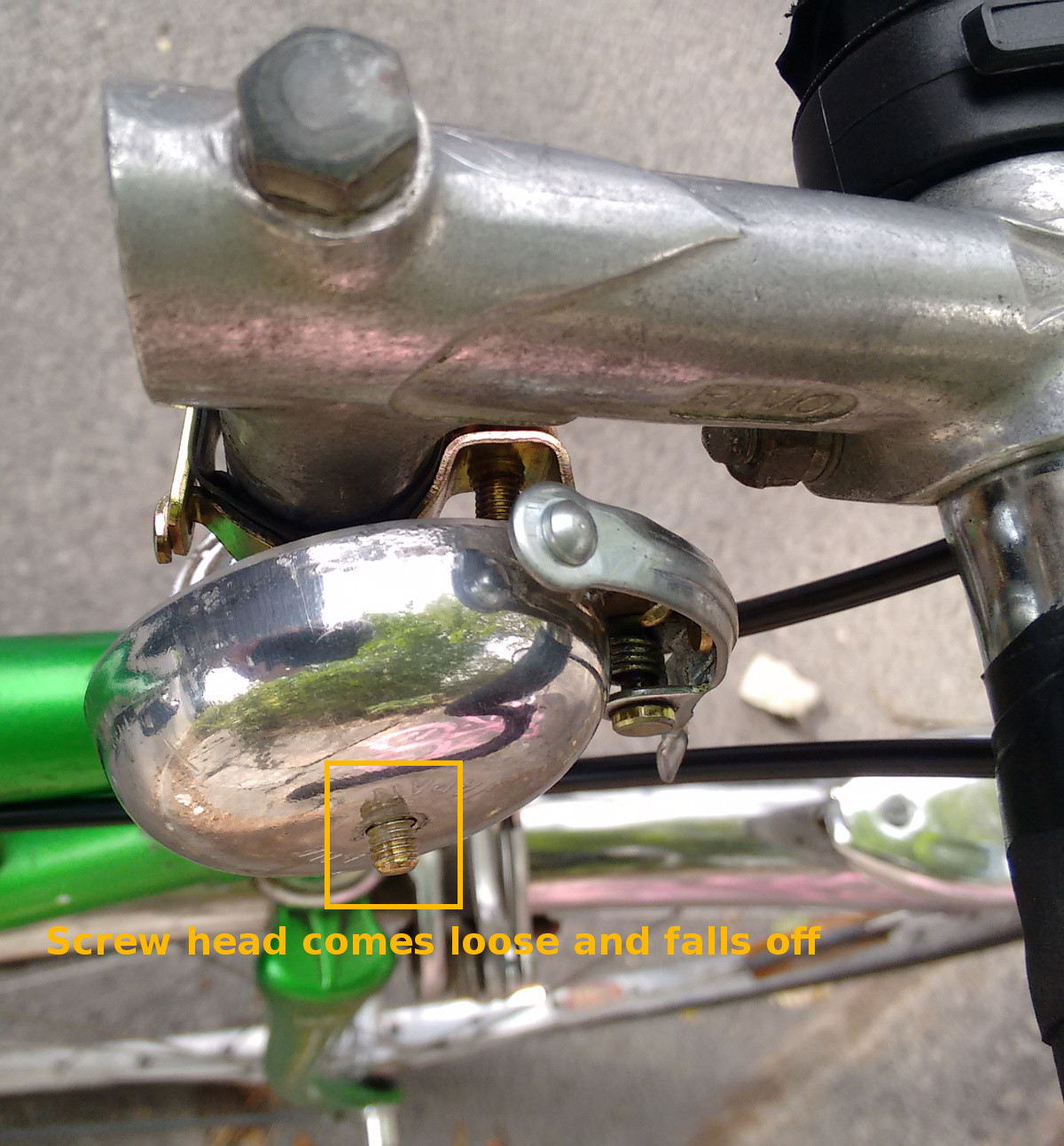 How can I fit a bell to my bike which is durable enough to survive lots of vibration and yet still be easily accessible from the drops?

†In this regard, possibly the only places in the world which can safely be called idiot-free are all in the Netherlands or Denmark.

If your screw head is actually a nut, like the picture looks like, replace it with a nylock nut. If that is not possible, thread lock fluid like blue Loctite works nicely.

The simple cheap design of bell that makes a single ping when the lever is flicked against its spring should be more robust. I've never had one fail. The screw that attaches it to the bar should stay tight but anyway can be tightened if it works loose. The adjusting screw (if there is one) should have some friction.

If you are not happy with the loctite suggestions above, then you can try a different type of bell.

The Knog 'Oi' bell has a fundamentally different construction which doesn't rely on a the traditional bell dome. It will not come loose.

However, it is expensive (for a bell) and you may feel it is too much for a bell.

If it's an old road bike I presume it's 1" threaded.

Get a bell with a 22.2 clamp diameter and no other fasteners but the clamp. Incredibell Brass Duet is one such. Mount it on the quill and Loctite the threads.

You could also just use a bar end mount bell.

Not the answer you're looking for? Browse other questions tagged road-bike handlebars accessories urban-riding drop-bar or ask your own question.

3
Bar end brakes and handlebar swapping
7
Are drop bars suitable for winter commuting?
1
Getting used to narrower handlebars
10
Reversing Drop Bars
0
Specs for parts on Giant Defy 4 (2013) to decide on upgrades to transfer parts onto another bike
3
Are there geometrical differences between framesets optimised for flats vs drops, other than top tube length?
7
Why/how did flat bars take over?
5
Braking on a vintage road bike
4
Have old bar end shifters which don't seem to fit in the new handlebars
0
How will swapping drop bars to butterfly bars affect bike fit?