Seeking information on this Raleigh [duplicate] 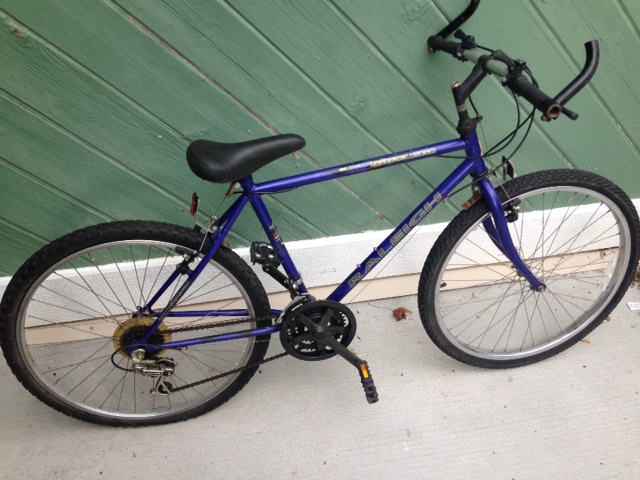 I've been given this bike that needs attention. I have found no information on the web about a Raleigh "The Mission" bicycle that matches this type, though there's lots on the more recent rock hopper. I'm wondering about its age, make up, market, -any information really. It looks like it might make a good commuter for a small adult, which I'll have on my hands soon.

I'd guess late 90s for this bike. Reasoning:

The overall look of the frame is small diameter tubes, which implies steel. You can check this with a magnet. Aluminium frames of the day were rather oversized by comparison. It appears to have aluminium rims though, which is good, better for braking than steel rims.

Its a rigid fork so was never intended as a hard-core MTB. The fork doesn't have a crown as such, instead the tines (legs) are welded straight to the steerer, giving it a curvy-hips look just below the headset.

I can just make out mudguard/carrier mounts at the rear dropout (fender and rack) so it has commuter features.

There's a quill stem, which is perfectly functional, but these days only low-end bikes have quill stems. Most have moved to threadless.

The cantilever brakes will be fine once adjusted. Given the age, you'll want to consider new pads, and possibly replace the inners and outers. Canti brakes have a straddle cable which should also be replaced.

Its got a wide-range triple crankset on it, where the granny chainring is about half the tooth count of the big chainring. Not a bad thing.

To make it a commuter - first size it to the rider. That may mean replacing the seat post because it looks awful short to me.

Do put some air in the tyres - that back one looks quite devoid of atmosphere!

Consider removing the barends - they are known for catching things and stopping the bike in a hurry. Vines/branches, people, cars, other bike's cabling or bars and it can all lead to a quick accident.

Lastly, a commuter should have decent mudguards/fenders in any climate that experiences rain. Consider fitting some, as well as lights and reflectors.

20
How can I tell what year my bike was made?