I generally commute along four-lane 30 mph [50 km/h] main streets. Is this wise? [closed]

Ask Question
Asked 4 years, 2 months ago
Active 5 months ago
Viewed 473 times
0
Closed. This question is opinion-based. It is not currently accepting answers.

The Most Direct Route is Not Always the Best

... Your driving commute route is usually a horrible bicycling commute route. I purposefully avoid big roads as much as possible and take small residential streets or dedicated bike paths when available. An extra mile on a bike path can actually save you time over a shorter busy commute route — not to mention the savings to your health, safety, and the increase in your general enjoyment. If my commute reminds me of my Sunday ride, then I know I have a good route.

You are a bicyclist. There is no reason to endanger your life on the 50mph [80 km/h] express-way when the 25mph [40 km/h] residential street can get you there just as quickly. In California, residential streets are often extremely wide (Parked car + Bike Lane + 1.5Width lanes both ways) compared to dedicated expressways — and can be orders of magnitude more safe and comfortable to ride. The pavement is often newer and less broken.

If you are new to the area, spend a weekend or two just exploring local residential streets. Hop on over to Google Maps and find the a way to use small streets to get to where you need to go. (Often this involves riding through the residential maze and with at least 5 or 6 street changes.) Practice your route at least once and carry a printout of the route with you at least the first few times.

[...] During busy commutes, drivers are often distracted in many different ways (putting on makeup, drinking coffee, worrying about being late, etc.) and can be unaware of bicyclists. Nothing will ruin your day more than an accident on the way to work.

But, if I remember correctly, John Forester writes in Effective Cycling that four-lane main streets (with traffic lights) are better for commuting than little two-lane residential streets (with four-way stop signs at every block). The main streets are straighter and flatter. He adds that, if you take the lane, drivers will notice you and give you space. (Personally, I do generally take the lane.)

I'm seriously annoyed by having to brake heavily at every single four-way stop sign (especially when descending). Also, the residential street grid doesn't always pass underneath expressways or major railway lines. So I tend to end up doing most of my commuting along busy 30 mph [50 km/h] main streets, rather than quiet residential streets.

I don't usually commute during rush hour. The car drivers seem to calmly accept it when I take the lane; and I accept the drivers' right to use the road too.

Is it wise for me to stick to main streets for the majority of my ride, even though there are quiet residential streets just a block away?

You need to exercise judgment based on your circumstances.

I generally agree with the advice to ride on arterial roads rather than side streets. But in my own town, there are some arterials I'll gladly ride on, and some I won't go near. There are many side streets that would be slow, with constant stopping, and a couple that are practically bike highways.

So: is it "wise" to ride on main streets? That depends on whether you're trying to get somewhere quickly or want to take it easy. On how fast and aggressive traffic is on the road. On how wide the lanes are.

I second in particular the first sentence of Adam's answer ("exercise your judgement") but would like to add another thought or two.

I have ridden bikes in places as disparate as Berlin, Germany; Houston, TX; Portland, OR, and two weeks or so in Manhattan.

My experience is that in general riding on the road feels safer where motorists are used to bicyclers and have more practice overtaking them safely. In Texas one could feel that they didn't quite know how much lateral distance to keep, whether to wait or not etc. — generally spoken, how to behave when confronted with this alien traffic participant. In Portland and Berlin it's not always exactly safe but I usually feel that the motorists know what they are doing.

But there are exceptions to that rule which were caused by the traffic situation.

Portland is known as a bicycle friendly city but I felt extremely uncomfortable on the roads that connect Beaverton to the city (Barnes/Burnside and NW Cornell); they wind through mountains without any shoulder or bike path and even though they are in parts only one lane in each direction they serve as commute arteries, with non-residential traffic. Here with a short tunnel as an extra: 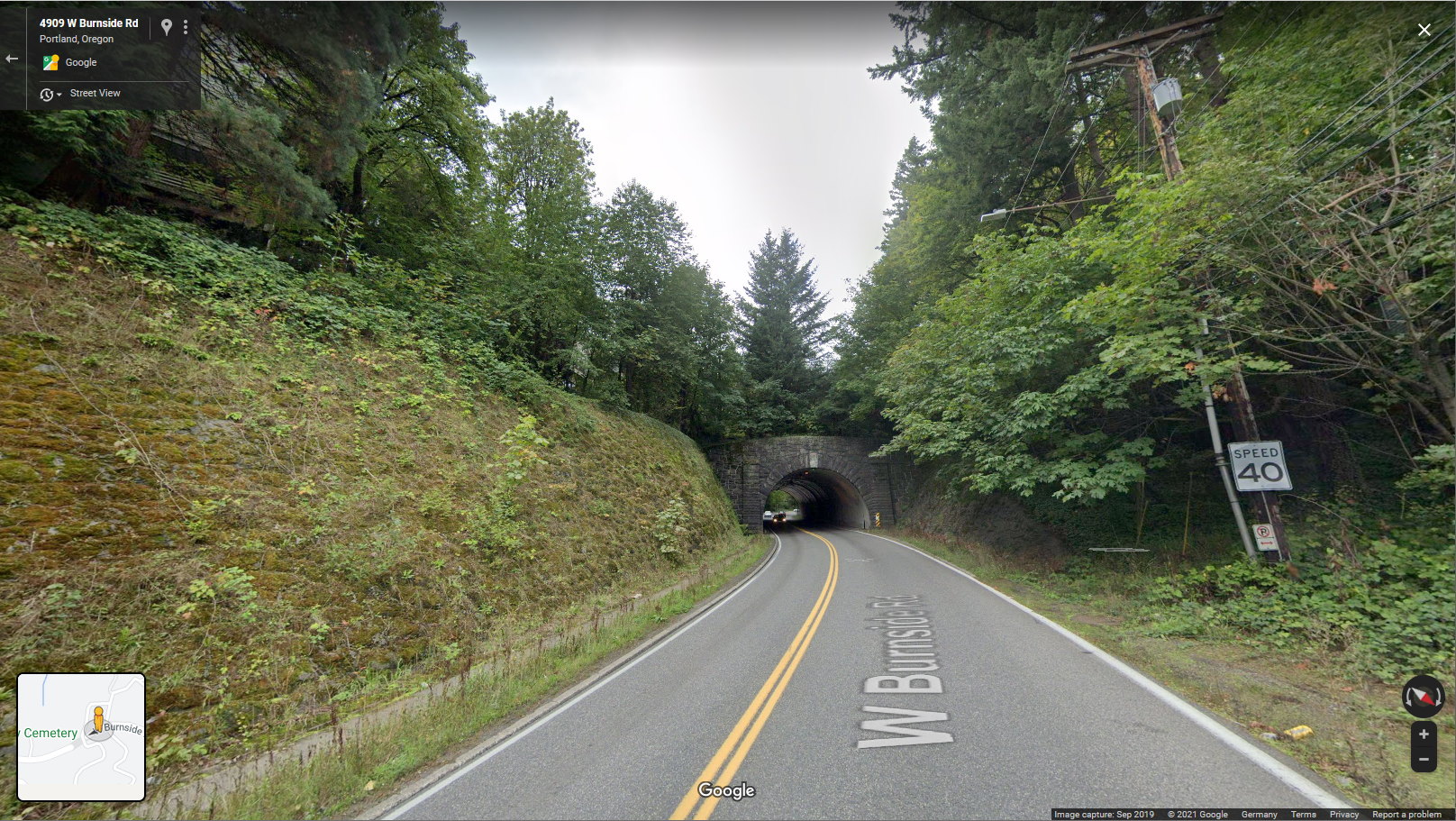 I tried a few times to navigate them but felt so unsafe and uncomfortable that I decided not to ride them at all. Instead I took the bike on the tram/light rail, which is very good there.

In Houston (Bunker Hill area) the advantage was that there is often a shoulder or sidewalk or strip mall one could use. And you have to give Texans a point: Many things there are indeed bigger. Cars easily can use one of the many other lanes...1 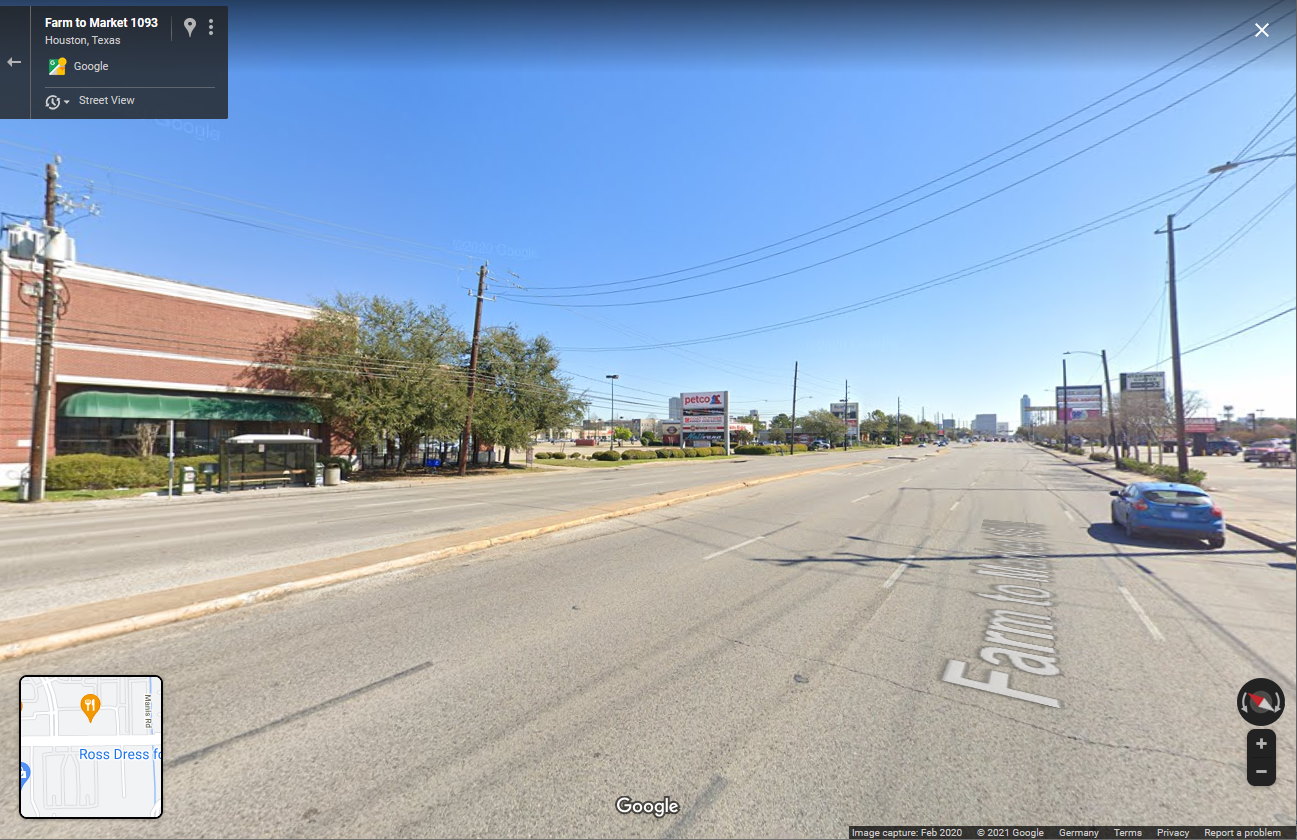 Going on larger roads like Briar Forest without that was uncomfortable but felt doable. It was not as prohibitive as the Portland situation because visibility was better (no hills, no tight curves) and there were two lanes per direction, allowing the cars to pass easier. In the picture below the sidewalk ends and does not re-appear for a few miles. As an aside, the occasional pedestrians I saw were Mexicans, presumably household helps in the surrounding wealthier neighborhoods. They would simply walk on the grass shoulder, where a little dirt path had formed, which is not an option for cyclists. 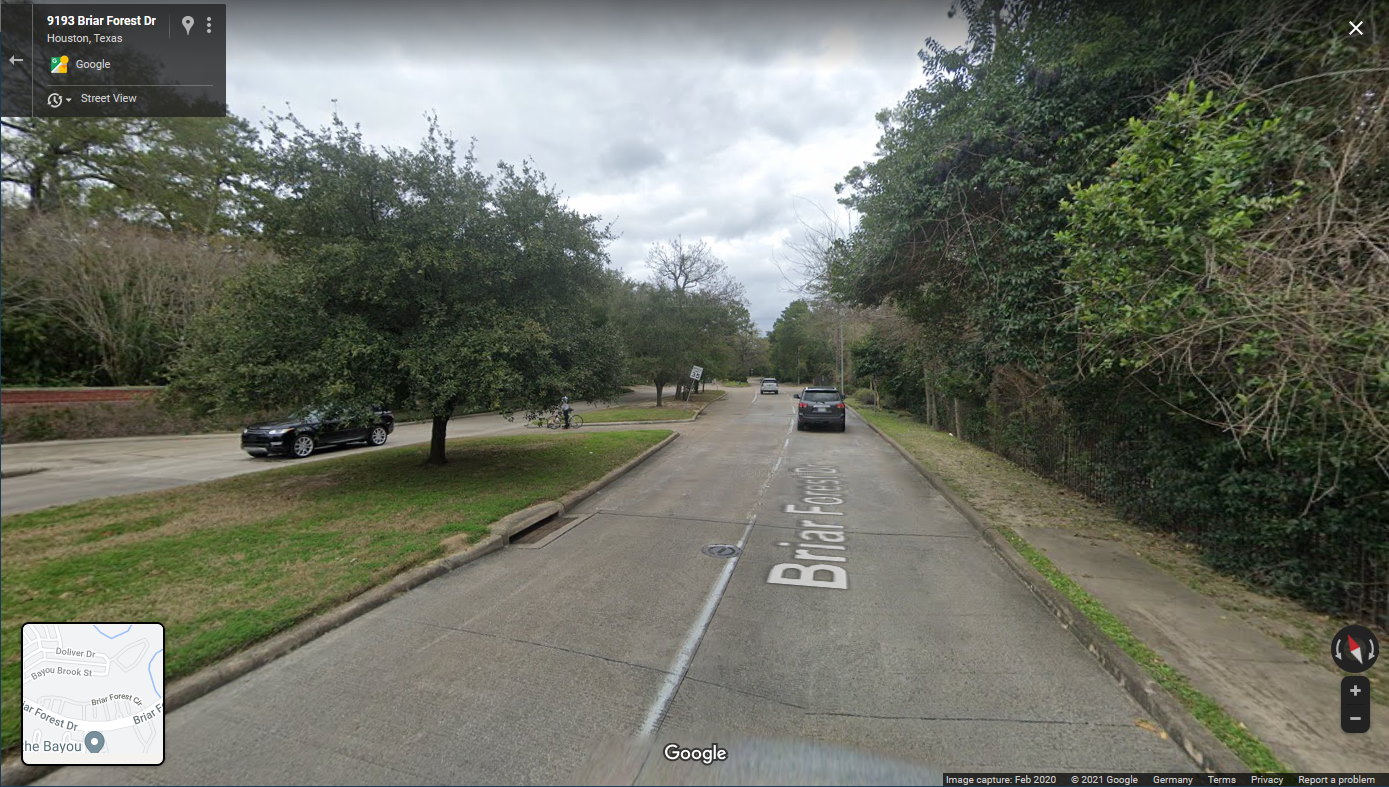 As a general observation, paradoxically I feel safer when I'm faster: The motorists behind me feel less of an urge to pass quickly, and they have more time to notice me and come up with a conscious plan of action. Being slow made the uphill sections in Portland particularly unsafe.

My rule is the following:

Be wary if there is no bike path or shoulder and you must be directly in the cars' way. Listen to your gut feeling. If it feels to uncomfortable, it is probably too dangerous. Dangerous encounters are warning shots. Heed them.

The actual level of danger is a mix of the general bike-awareness of the motorists and the particular street situation, the latter overriding the former: Is the visibility good? Is it a street with businesses (Westheimer) or a pure through-street (Barnes)? Is it easy for cars to pass or are they stuck behind you unless they take risks?

1 Still doesn't mean it's exactly safe though. About 250 people die each year in Houston from traffic accidents, and most of Westheimer is on Houston's "The High Injury Network" — I hope that link works. Actually a surprising and laudable first step in addressing the deficits. From "driving" with street view I'd venture the guess that the traffic lights are to few and far between (none for pedestrians, for example) so that people cross the street in an unsafe way.

Not the answer you're looking for? Browse other questions tagged commuter speed traffic bikeroutes bike-vs-car or ask your own question.

46
What do you wish someone had told you before your first commute?
13
What does "claiming the lane" mean?

23
Passing cars on the right, and later merging into their lane
14
How do you decide your route to commute to work?
22
How should I approach hills?
25
Discouraging motorists from stopping at an intersection when they have the right-of-way
6
If a lane is going to expand should the left lane be taken prior to the expansion?
5
First time commuter needs advice
3
Hybrid, touring, or road bike for new commuter?
3
is biking lower wacker drive in Chicago a good/feasable idea?
5
How to handle motorists' dangerous behaviour with an impassable group?