Front caliper rubbing spokes, should I dish the wheel outward?

I've a problem with my front wheel. I have a Velocity Aileron rim (584mm ERD), a Shutter Precision SL-9 dynamo hub(the flanges are not offseted like other disk hubs, but they have a smaller diameter than usual) and 28 Sapim CX-Ray spokes.
I'm using a 160mm CenterLock rotor on it in combination of a flat-mount Sram Force hydro caliper. I have a carbon fork with a quick release axle.

When on the stands the caliper/pads are correctly centered and there is no disc rub, however the space between the caliper and the spokes is only ~1mm.

Here's a not very clear photo (notice the banjo bolt) : 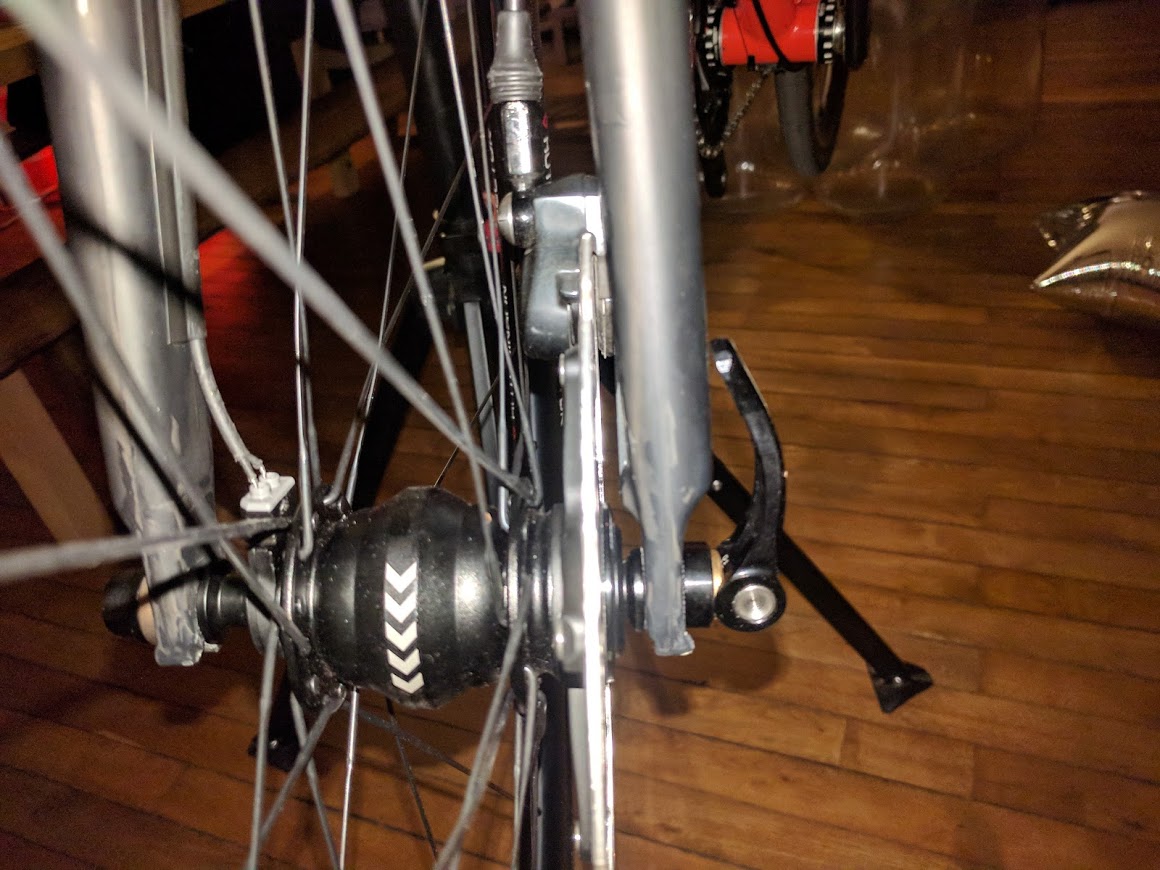 Under load (when I'm braking while riding), there seems to be some flex and the caliper rubs the spokes.

So the diagnosis I've made is that the distance between the spokes and the caliper is too small, and the symptom is that it causes some rubbing.

Assuming the wheel is correctly mounted (centered and correct tension, I trust my wheelbuilder for now), what solutions do I have ?

We came to the conclusion that I could dish the wheel outward a bit by tightening all non drive-spokes half a turn. Does it sound like a good idea ?

Super frustrating problem. Some brakes are a little notorious for this.

You don't mention whether your pad/piston extension is centered. If by some chance it was biased towards the inside pad being more extended currently, fixing that could fix the whole thing. By the same token, brakes have some tolerance for unequal extension, so biasing it towards the outer pad being a little more extended could also be a workaround. (You would try this be resetting the pistons and adjusting the caliper to a starting position where the inside gap is less than the outside gap, then letting them self-adjust. The brake mount has to be done on the fork such that the caliper has room in the slots to slide over this much.)

Shimming the rotor is also a possible fix. You can buy special centerlock shims for this or you can cut through one side of a freehub/freewheel/BB spacer to bend it on clear of the centerlock splines. This also requires room in the adjustment range of the caliper to work.

If you don't have adjustment room, there are also possible solutions involving lacing the brake side of the wheel all heads-out. You could do it crossed, kind of reverse "race lace," with the spokes you have now bent around each other and more prone to fatigue breakage, or you could half-radial the wheel and rely on the relatively large smallest inscribed diameter of this hub to transfer brake loads to the right flange, a trick that some boutique wheels also play. Both are probably pretty bad ideas that would at least work for a while. (It would be up to you to do the math/research on whether your SP's shell diameter was adequate for the latter plan.) Another path would be lace that side of the wheel one cross, heads out. One cross wheels are usually all laced on one side of the flange, and the cross would be up far enough that it's not awkard in terms of spokes being bent around each other. This would give that side of the wheel some torsional strength to brace against bracing loads. It may be plenty of torsional strength for the purpose in fact, but again doing the math would have to be on you. I believe all of these plans would buy you an amount of clearance equal to the flange thickness.

Putting the wheel out of dish enough to actually solve this seems bad to me.

I wouldn't dish the wheel to fix this if I were you- you'd have to do it a lot more than you'd like to prevent contact that close to the hub just due to the geometry involved.

Since the hub is centerlock get a 1mm freehub spacer and stick it on there. Hopefully that's all it will take. Alternatively, several companies make centerlock to 6-bolt adapters which may well push the rotor out enough to prevent the caliper from rubbing the spokes.

5
How to avoid turning the spokes while tuning the wheel
1
How should I install the front wheel of a Muddyfox Bike (UK)
0
Rear disc brake rotor rubbing against caliper frame mount?
1
How much will 4mm dish weaken the rear wheel?
2
Spokes stick out of nipples when rebuilding wheel
3
Why forward-facing spokes should be "heads in", except on the drive side of the rear wheel?
4
Is it common for the left side spokes of a front disc wheel to have more tension than the right side spokes?
0
The outside diameter of the brake rotor rubs against the caliper