For this question, I'm referring to bike lanes of the type shown here: 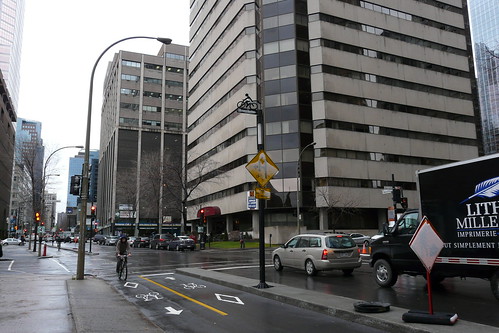 To me they seem like a really bad idea. Firstly, one of the lanes is going against traffic. In this instance, the cars turning left at the intersection have to look behind them to see if bikes are coming from behind. Also, it seems that it would be really difficult to pass another cyclist if the path was busy, since the only way to move around another cyclist is to go into the opposite lane, against the traffic of the other bikes. The only advantage I can see over regular bike paths is that for the most part you are cut off from the cars. However, I've never had a problem with cars using "regular" bike lanes. Are there any studies as to how well these lanes work? Does anybody have any experience with these kids of bike lanes? How do you like them compared to other types of bike lanes?

Part of my concern is shown in this video (skip to 2:50). The lanes seem to move really slowly, and there seems to be a lot of people in the wrong lane completely. It seems like it would be nice for people taking a leisurely Sunday ride with the kids, but if your actually trying to commute and get somewhere in at a reasonable speed, it seems like it would be impossible.

Studies done by the school of Health at Harvard, and published in Injury Prevention, are showing these to be safer.

Bike lanes like this work well in London city centre. Being separated from the traffic is a major bonus. In a number of places they use separate traffic lights for the bike lane so the cars aren't crossing the lane when the bikes are on the junction. In other places, there are no right turn, or no left turn junctions to protect the bike lane (common in a city centre due to the number of one way streets).

Given the number of junctions in London, the number of traffic lights, pedestrians etc, it just isn't safe to travel above about 12mph anyway and these lanes are perfectly safe for passing the oncoming bikes and the occasional overtake at these speeds. In general the stretches I use which are laid out like this are relatively short.

The biggest issue is actually the pedestrians who aren't expecting the bikes to come from both directions. Judicious use of the bell is needed to warn them. This has got better with familiarity, and it is only the occasional tourist who seems unsure, but the tourists tend to be more wary and aren't sure which side of the road we drive on anyway!

The seperated bike lanes in Vancouver seem to work well over here.

In my limited riding on these lanes, here are the some advantages that I have observed:

I do agree that the lanes are sometimes narrow, and maintaining momentum behind a slower cyclist going uphill may be difficult. I don't ride on them during rush hour, but they don't seem crowded enough to cause cyclists to overtake dangerously or otherwise ride irresponsibly.

24
Passing cars on the right, and later merging into their lane
78
Why is it safer to bike with traffic, instead of facing oncoming cars?
28
What's the safest way to turn left from a right-side bike lane?
13
Is vehicular cycling legal in France?
2
Safe and proper (or vice versa) left turn in traffic
6
If a lane is going to expand should the left lane be taken prior to the expansion?
15
What is the safest and most courteous way to ride on a two-lane road?
6
Get off bike on crosswalk?
36
Threatening swerving by driver - should I report it? (Canada)
2
Safety of separated bike lanes in less dense areas