I have a Shimano (I think Dura Ace) 10-speed rear shifter from around 2008, it came on the aero bars of a Cervelo P2-SL. Like a genius I took it apart today and I cannot for the life of me work out how it goes back together. Not much on the web though many people refer to a '105' bar end shifter though mine says '10S' (10 speed), it looks a lot like '105' so I think that is the cause of the confusion.

Here are the constituent parts:

And with the four rightmost parts turned around: 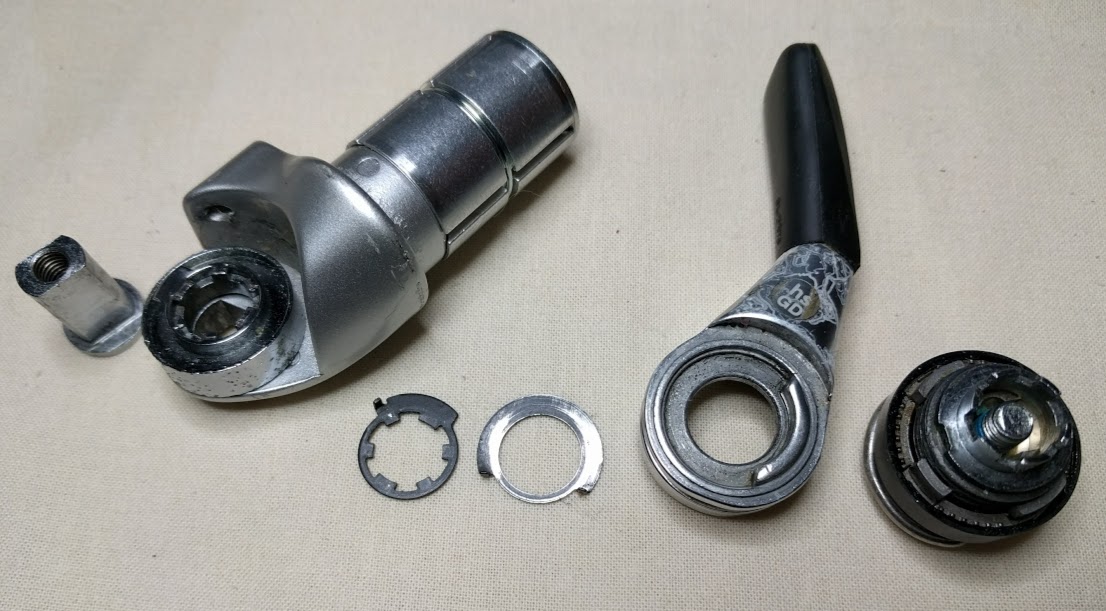 I haven't found the exact part on Shimano tech docs. The closest I find is the SL-BS78, but the exploded view PDF makes no mention of the two irregularly-shaped washers in the centre of my pictures, and they're my problem. I did find what seems to be the same mechanism in the SL-7900 downtube shifter, relevant bit shown here: 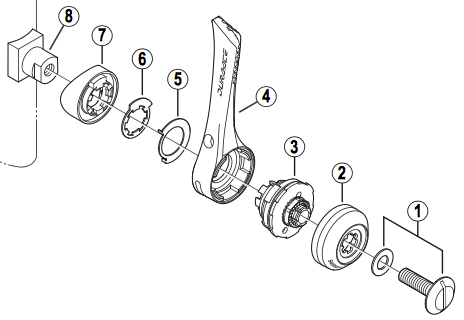 It's the two washers that are killing me. The rightmost one (part 5 'Stopper washer' in the EV) fits in the lever nicely, but the leftmost one (part 6, 'Spacer for rear'), while it does sit over the mounting stud, freely rotates when it seems it should engage on something. It has 6 tabs that correspond to the mount, and seem to correspond to the 6 lugs on the SIS unit (lower photo, right), but it doesn't fit over or inside any part during assembly. It slides around and it seems it needs to line up with the SIS unit somehow.

My washer 6 has a tab (lower photo) that goes toward the mount. The 7900 EV doesn't show that, but the Service Instructions show its orientation, which I'm following. It's just that I can't get it to line up with or over the SIS unit. 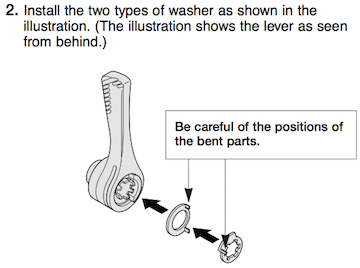 Short answer: I kept fiddling with it, and eventually it all snapped together nicely. So there is no magic orientation, you'll know when everything is correctly assembled. The answers below are much more methodical, and helpful.

You have probably resolved your problem, but others may encounter it; I did.

Number the 6 parts in your photographs from left to right so they correspond to the exploded sketch: 8--the nut; 7 and 7a (7 is the mount that enters the bar; 7a is the notched, cylindrical disk that is a separate piece from the mount.); 6--the single tabbed notched washer; 5--the double tabbed washer; 4--the lever; and 321-- the pronged ratchet mech, conical plastic cover, and bolt.

Washer 5 rests with the tabs against either end of the raised segment of 4 (lower photo). Insert 321 into the back side of 4. Place 6 on top of 5 with the tab up and notches aligned with the prongs of 321. Place 7a on top. The tab shown at the top of 7 in the sketch fits between the single tab and the raised segment. All the parts are “fiddly” but will fit together only one way; if any parts are canted even slightly, try again. I found it helpful to put a dot of nail polish on 321 and 7a in way of the single tab of 6.

Install the parts on the mount, tighten the bolt, and check the function.

Which would be opposite of the install instructions - but as you previously stated, and from the diagram and images you are not working with the correct component diagram

try reversing washers five and six and facing the black greased sides of the respective components unto each other and see if that makes it fit together.

I managed to get mine together as well - it's difficult, I had to push the pedal with my feet to change gears upwards, while lifting the bike up with my teeth, because both of my hands were holding the shifter.

When you look inside part #3, there's a particular way part #8 fits in there. Get them aligned (I had to tighten the cable, lift the lever) for that.

Not the answer you're looking for? Browse other questions tagged shimano shifter or ask your own question.