On a roadbike, I want to mount dynamo front light on the brake pivot bolt bracket (because my handlebar is occupied with gadgets, and because I want to use the handlebar bag which obstructs the light). Naturally, there is no extra length in the bolt, and the standard solution is a longer recessed nut.

Unfortunately this does not work with my fork: the nut does not go down further than the designed one (I realized this having bought a longer recessed nut after asking a related question earlier).

The only solution I see is a longer pivot bolt. Is such thing available? Or is there any other way to mount the light above the wheel, below the handlebar bag? (I do not want to put the light any lower.)

The brake is Sram Force 2012 (if that matters). I'm ready to replace the brake if another model allows for a solution.

Some caliper rim brakes do have interchangeable pivot bolts and accompanying hardware available, either explicitly or by way of what are usually simple hacks. Within Tektro brakes for example, many of the brake arms use the same bolt style and hardware and can be switched between front recessed, rear recessed, front external nut, and rear external nut mounting if you have the hardware to swap around, which can be useful at times in the shop when you need a certain color, reach, front/rear position, and nut style permutation right now. Tektro makes a product that supports this so you don't have to go cannibalizing other brakes. But none of that applies in any way to a Force brake, or if there were a way of getting another company's external nutted pivot hardware on there (which would be one way of solving this, probably) it would be an experiment and a more fabrication-requiring hack. Your brakes don't have any pivot hardware offered aftermarket by SRAM.

If you're willing to change the brake, you may be able to get a front brake intended for external nut mounting to work. I say may because you'll probably need to trim the bolt some to work with your recessed nut, but they only give you so much threaded length to work with, so you'll need to have enough threads falling in the right area. I believe all or almost all brakes have threads that can't be extended with a die because the material isn't there to do so, either because the threads are rolled or some other reason. Another potential solution if that becomes a stumbling block would be putting in some spacers in the recessed part of the fork and just using an external nut.

Another approach is using one of the generator light brackets available that are somewhat intended to address issues like this by only adding a bare minimum of material behind the caliper. (Maybe you've already looked at this; I offer it in case you're running into the issue by trying to use one of the chunkier generator light brackets out there, such as the plastic ones.) An example would be the B&M 471F: 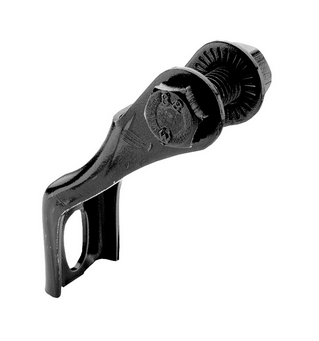 Many people who ride road bikes with handlebar bags, such as randonneurs, use handlebar bag racks and other front racks with integrated light mounting for generator lights.

Not the answer you're looking for? Browse other questions tagged road-bike brakes headlights or ask your own question.