isn't a fixie without a full chain guard a safety hazard?

Yes, I know it would totally ruin the clean lines and the uncluttered, (well maybe just a discreet front brake), looks, but I've never seen this question asked, much less answered.

A chain guard does more than protect the chain from wear. While fingers are unlikely, I could see sticks and brush, or a piece of clothing getting stuck. When that happens without freewheel the entire mass of the rider and bike times velocity squared would be utilized to crush the obstruction.

Am I exaggerating the risks or is there something fundamental I'm misunderstanding?

I don't see many objects managing that feat, without serious planning on someones' part, and unless it's flesh and bone, or something that was hard enough that the chainring wouldn't cut through it, then there would be minimal harm.

If a stick gets caught in the chain ring, it will get cut in half. So what if it does? Nothing will happen to the rider, and even the chance of damage to the bike is minimal. Same thing with brush. Unless it's large enough to stop you pedaling, then it's not a problem. And since fixies are rarely ridden off road, the chance of these 2 things happening would be pretty remote.

I've had my pant's leg get caught in a fixie chainring, and all it did was tear the pants, and teach me to choose better what clothing I ride in.

There's no real harm to a chainguard, but not a lot of benefit either that I can see, so if you want one, go for it, but I'll be fine without. I'd say the lack of brakes is a far bigger hazard when riding on the road.

My friend lost two front teeth and part of his face on the road when his shoe lace got caught in the chain of his track bike.

With that said, do whatever you feel comfortable doing, and feel free to tell that story to anyone who makes fun of you.

I have came off due to clothing getting caught and I don't think the danger can be over-looked.

Since you are a man of taste and style, take a look at this minimalist chainguard: 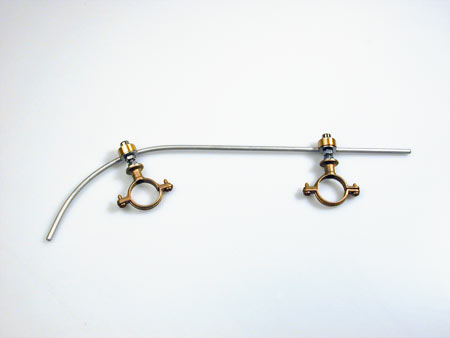 With a few workshop tools you could make your own...

The same company also make an uber-cool trouser clip that you may also want to check out.

Cycling is a safety hazard, it's all a question of risk mitigation, reduction and awareness.

A fixed-wheel certainly presents a different set of hazards, but my short response to the question is 'no'. I do over 3,000 miles a year on my fixed (almost all of my commuting) and have done so for the last 4-5 years and I've never caught anything in my chain, be it cloth, stick, lace or anything else. But then I generally cycle in shorts or tights with my velcro-strapped cycle shoes - risk avoidance, don't put anything likely to get caught in the vicinity.

So I think you're over-estimating the risks on this dimension; there are risks worth worrying about out there - most of them are behind the steering wheels of metal boxes with 4 wheels - without creating needless ones!

A fixed gear bike will be "less forgiving" if something gets caught up in the drive train simply because you can't coast to a stop and dislodge the object. The object will either break and fling off, or it will "stop" the bike usually throwing the rider very hard and very fast into the ground (often face-first).

If you're going to ride fixed as a commuter with street clothes you're taking on additional risk with no real benefit. So yeah, put a chain-guard on there as well as a front brake and some foot retention system.

To your fingers and clothing, yes; bigger items (like your foot) dont really pose a threat because the chain and cog cant really get the necessary leverage to crunch through them. That doesn't mean it wouldn't hurt so I don't advise trying it.

Just watch where your fingers are when the bike is in the stand and the cranks are spinning (biggest danger) and dont wear your bellbottoms while riding (less of a danger).

My friend recently gashed the back of her calf completely open on the exposed sprockets, so to those who claim it won't hurt your skin...it did. It's now got splattered flesh all strewn about it. She's got 14 outer stitches and 4 inner. The gash went down to her muscle. DEFINITELY buying chain guards asap.

I can see losing a finger if care is not taken while cleaning a chain. Do not wipe bottom of chain while turning the pedals. The wheel inertia will pull your finger between the gear and chain. Ouch!! If the bike is on a training stand be sure little ones don't play with the spinning the crank either. I feel safer with a chain guard if front derailleur is removed.

Not the answer you're looking for? Browse other questions tagged chain fixed-gear or ask your own question.