As recumbents are low to the ground and hard to see, how to you use one safely on a normal road?

My wife thinks that she can't use a recumbent on the roads, as a car driver will not be able to see it. What’s the solution?

Getting a high safety flag is common on recumbents (and trailers), at least in the US. 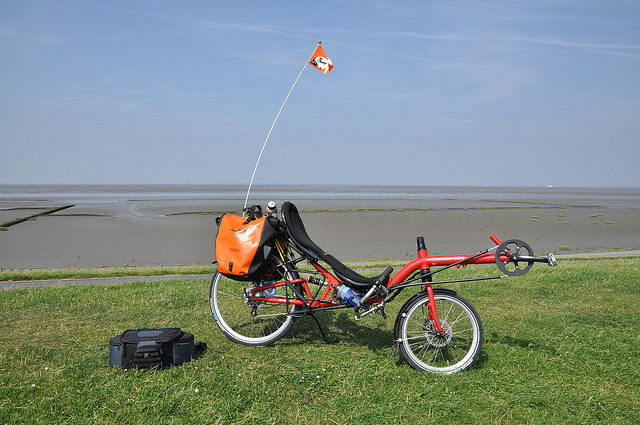 Sorry for the late answer.

The solution is to persuade your wife that she will be seen.

Obviously you can make the bike more visible, as the other answers suggest, but this is probably an emotional issue rather than a reasoned one. She feels less visible on the recumbent. The solution to the feeling is not so much reasoned argument as it is to start riding and focus on riding in places that she feels safe. Try to balance that against being exposed to motorists, so look for quiet back streets and places where bike paths cross roads. Avoid car parks because those are insanely dangerous even if they're low-speed.

If she doesn't have a recumbent yet, a velomobile might also help. The combination of feeling somewhat enclosed and actually being surrounded by a huge blob of colour does wonders. Not to mention the (almost always positive) comments the velo gets. Faling that, a tailbox is a useful addition - it provides storage as well as a block of colour. 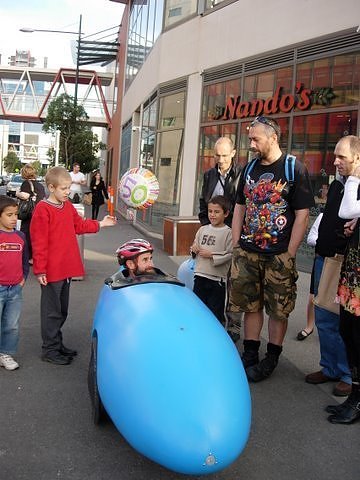 I've never had a car not see me, who would have seen a bicycle. That said, it's crucial to bike safely and to stay where the cars are looking: in the street, not the gutter or sidewalk. I also use a flag and reflectors. I particularly like reflectors on my body and helmet, since we perceive body motion more easily than machine (straight line) motion.

That said, flags don't help the worst visibility problem: when a car is approaching from a side street and not looking in your lane. Your front gears may be the only part visible, and they blend in at night. You need to grab that car's attention, so I have reflective tape all over the sides of my pedals.

Overall, you are probably going to be safer on a recumbent than a conventional upright bike.

Remember, a conventional bike can be hidden by vans and buses. The key thing, in my limited experience, is to stay well out of the gutter. Refuse to be intimidated by cars behind wanting you out of the way. Make sure you are where you can be seen. For instance, if two cars facing each other are turning right (across the road in the UK), just hang back away from the curb.

I'd add that getting reflectors and a flashing tail light, along with some sort of front flasher, will increase visibility.

Get a really high and visible safety flag. Remember that as a recumbent rider you'll quickly grow a large stomach and beard to cushion you from car impacts.

A recumbent has a single negative and several positives to balance.

The negative is YES you are lower, and therefore easier to be obscured by other items. This is similar to how a low-slung sport car might be invisible beyond a larger vehicle on the roadway.

To balance that out:

Justifications: I've done about 20,000 km on two recumbents in the last ~4 years, around a quarter on higher-speed narrow rural roads.

SUMMARY: Yes recumbents are different to a regular, taller bike. Better in some ways, and worse in others.

I feel the thought behind this question is wrong.

Some recumbents are lower than upright bikes.

But on my recumbents my head is on the same level as road (racer) bike riders with their hands on the hoods and higher than their head when they are on the drops.
And my bike is a mid level, there are many recumbent bikes which are higher than mine.

My field of vision is very open, I can easily see all in front of me and to my sides, while they can see the ground just before or under their front wheel.

If car drivers can not see me, can they see those road bike riders? (And a valid question in the Netherlands, can they see children on their bikes?)

These days many cars are so high that even on a tall sit up and beg Dutch bike I can not look over the top of them, and nor can the drivers of other cars see over them to see me. Seeing through cars is not easy either. And ever been able to see through the corner of a building? I have had three days in a row I stopped at a corner (where I have right of way) due to traffic approaching that corner too close to the parked cars and buildings along the road. (Better to stop when you hear a car coming.) Whatever the bike I had been on, they would not have seen me in time to stop for me.

So if someone wants to ride a bike, any bike, teach them to be seen and to be careful when they can not be seen.
But the type of bike, recumbent or sit up, is not making that much of a difference, until you get to the very low ones.

Low racers and low trikes (often the tadpoles) are below the nose of the normal cars and have to take even more care to be seen. Adjusting speed might be part of the solution. I personally do not want to ride those in traffic, but that may change when I have tried it for real. Never having used a bike that low I can not tell how cars react.

Not the answer you're looking for? Browse other questions tagged safety recumbent or ask your own question.

13
My wife has Cerebral Palsy (CP) so can’t balance on a normal bike, what are the options so she can go cycling with me?
13
Are there any recumbent tricycles that can be transported with a normal car?
12
Is it legal to pass a car on the right when that car is turning?
3
What bags will fit a Challenge Seiran SL?
14
How to proceed when pedestrians occupy the dedicated bike path?
15
Is cycling in the Netherlands without a helmet safer than cycling with a helmet in the USA?
0
Is there a site which has a good collection of recumbent bikes, still for sale new, to compare?
5
Why are recumbent bicycles and velomobiles illegal in UCI bicycle racing?
7
What can I do to pedals to help kids or smaller riders use the bike