Anyone tried to brush mud/snow in rear-wheel while on ride?

I ride my bike in the snow. And I think my bike can be a lot cleaner if I had a snow catcher in my rear-wheel.

There is possibility because the rear wheel fork comes with extra holes in it. I think we can hook a fork there to hold a brush at the back of the tire.

I think it will keep the gear and derailleur cleaner. I guess it will also reduce the skidding.

I prefer not using anything in the snow to block the snow. You risk the snow packing in the snow blocker (e.g. fenders) and freezing, which can be dangerous. A brush against the tire (depending on the stiffness of the bristles) could also damage your tire.

If you want to use something, a seatpost fender and a downtube mudguard are probalby the safest options.

If you want to keep your bike clean in winter, good luck (especially if you ride on salted roads). The best course of action is to bring it in when you have time (e.g. 24 hours), clean the bike indoors, let it be completely dry then take it back out. Or, if theres a warm day, do a quick (light) wipe down and dry the bike off as you go. You could also try a stiff brush which may get rid of some of the salt. Or just deal with a dirty bike, and clean it in the spring.

I thought I've seen something like this before... so I googled a bit and found traces of this design, apparently deceased. 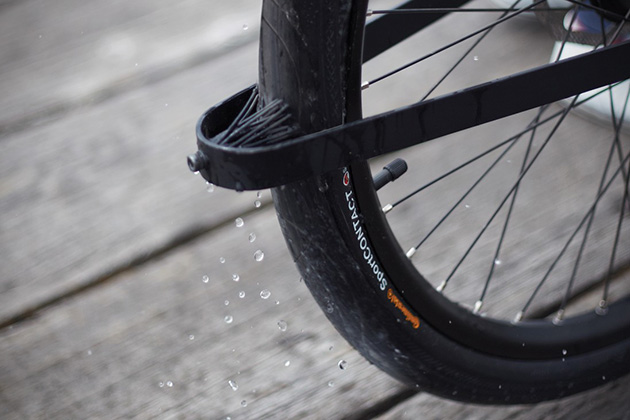 While it looks clever, I have some doubts that it will work efficiently for any real rain. As soon as the brush is "saturated" with water, incoming drops will cause some of already collected water to detach and continue its way up.

It will definitely not work for snow, the reason being the snow is hard not liquid. I had my rear wheel fully blocked many times when a build-up of snow formed in the chainstay-seattube-bottom bracket area of my bikes. Even a rear fender placed too low once caused such snow accumulation resulting in inability to rotate the rear wheel. Placing another hinder somewhere can only shift the position of such build-up or even provoke it.

Maybe some oil on tires might help to repel snow sticking to the tire, but obviously the same oil will hurt your braking capabilities to the extent that it will be safer to leave the bike home. However, you may try to use some bike polish on the frame and on the drivetrain parts. It is told to help with preventing mud sticking to the frame; however, I used it and did not notice any measurable effects.

Solutions that I consider to work are:

Not the answer you're looking for? Browse other questions tagged diy fenders snow or ask your own question.

8
What can I do to keep my rear derailler in good condition when commuting in the snow?
9
Snow Tire Wraps for Bicycles
2
How can I avoid mud from splashing onto my back without a rear wheel fender?
16
Bike choice for snow commuting
3
How much tolerance is acceptable on the chainline of a fixed gear conversion?
4
What can I get for panniers to commute with my 17" laptop?
0
Which tires (and rear fender?) for Bianchi Metropoli Uno hybrid bike
0
Why aren't winter bicycles camping events common as the motorcycles one?
4
Chainguard vs front mudguard to protect the chain from spray