I have a vintage Pinarello with a crooked fork

I was wondering about replacing the fork for a better fork. Should I just take my bicycle to the bike store?

If the damage is very minor, a good shop or frame builder may be able to straighten your existing fork, but it's more likely that the fork needs replacement.

Yes you should get it checked out.

I had an 80's 10 speed Morrison with frontal impact damage, but it was minor enough to not notice immediately. However it was "squirrly" to ride, and any minor road bump was enough to make it veer right a bit. A large bump could have put me into traffic.

Also I noticed on a slightly wet day that the wheels didn't follow each other while riding straight ahead. Instead, the front wheel tracked about 20mm to the right of the back wheel's track. Confirmed using a rain puddle in an otherwise dry carpark.

Another test was to hold the downtube and front wheel in one hand. It was obvious to the eye that the wheel was not in-line with the rest of the frame.

My fix was to remove the fork and use a vice and some packing for protection. Then I carefully bent it back into line. This was checked using string, and by laying the fork on flat concrete and carefully measuring the gaps on both sides. A bit of a "bush" fix but it worked well.

A steel fork can often be bent back into shape, but an aluminium or carbon one will be scrap.

Depending on how the bike was damaged in the first place, you may have additional damage to headset bearings, cups/cones, and the frame itself.

Here is a Mercan that has had a frontal impact, not enough to puncture the tyre or damage the wheel, but it wrote off the forks and bent the frame in two places. This will turn into two rings of rust over time.

I suggest you take a steel ruler to your bike frame and look for unseen damage. 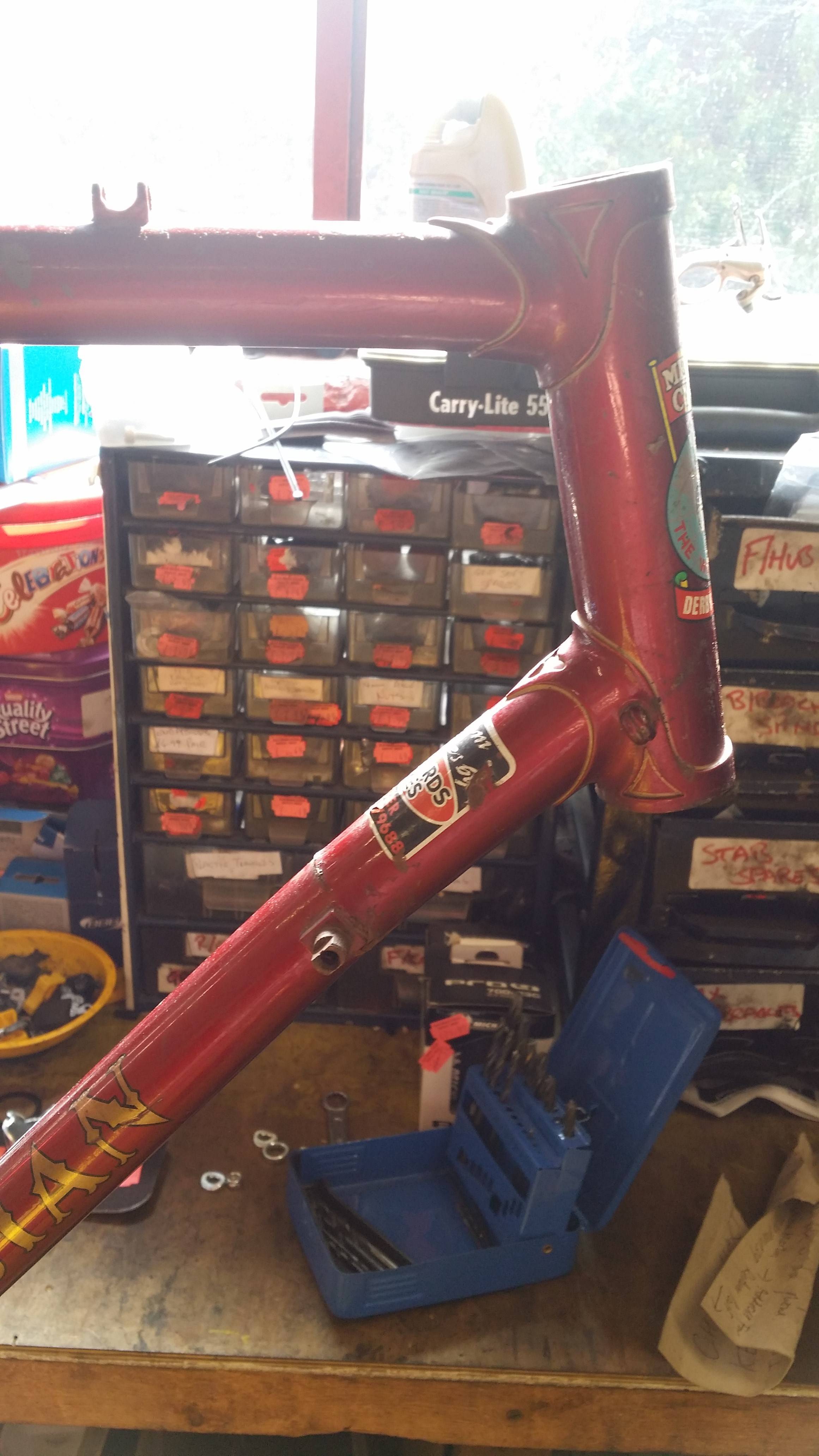 Not the answer you're looking for? Browse other questions tagged repair fork vintage damage or ask your own question.

13
Replacing suspension with a solid fork
3
How much play in a spring suspension fork is normal or safe?
6
Fork Failure on Vintage Steel Tandem Bikes - Any insights?
5
Can this bent (after crash) rigid steel fork get repaired?
10
Bike unstable (difficult to ride without hands on bars) after changing fork after collision
6
How to improve/restore vintage Peugeot bike, or is it even worth it?
2
Replace bottom tubes of Marzocchi fork with rigid tubes?
10
What to do with a bent but not broken aluminum seat stay
1
Aluminum fork: paint defect or sign of strained?
6
What era/country/manufacture is this vintage step through?