What is the best technique for carrying a large box on my bike rack?

FedEx has a large package for me, and it has me wondering--what's the best way to carry a large box on a bike with a rear rack? What types of tie-downs, knots, etc should be used?

For context, this is a "regular" bike (not any kind of cargo bike) with a typical rear-rack. The box is likely 12"x18"x28", and around 20 pounds and the ride is fairly short. I'm looking for a simple solution that is primarily stable and secure; I can take a while to tie it on, and I can go slowly getting it home.

Most racks have a platform about 3"-4" wide and about 12" long. Usually 20 pounds is well within the weight limits. This means that weight isn't an issue, but keeping the item steady is. Your package needs to be fairly stiff for this to have any hope of working, since the rack platform is so much smaller. A porteur-style large-platform front rack or a trailer would probably be better than a normal back-rack.

First recommendation: take a friend. This will be hard to attach with a kickstand holding up your bike (or the bike leaned up against something). It'll be easier if the bike is held straight upright and if you only have to wrestle one thing at a time.

I would place it so that it's low and is "wider" rather than "longer". There seems to be a natural tendency to want to line up more with the rack, but in my experience that's actually less stable because so much hangs off of the back.

It's likely that this is tall enough to bump into the seat, so it'll tend to be right behind the seat, which may mean you can't quite use all of the rack platform.

I would use compression straps or bungee cords, rops knots take too much technique and time to pull tight and if it's loose or can slip loose it will wobble too much. If it's straps you want something that has a buckling mechanism that you can pull tight and locks up well. If it's bungees you'll want to work out what the reasonably-stretched-out length is (usually about 50% more than the unstretched length).

Straps: 2 over 62" long, and 2 over 80" long. Likely that 6' and 9' are the lengths you can find. Basically, long enough to go around the box front-to-back and side-to-side, with a little extra for going around some of the rack stuff and for pulling stuff tight.

Using the shorter straps or bungees, go from the front left of the rack to the back left of the rack with one, and front right to back right with the other. If the bungee is a little too long, try running through the rack and attach to the seat stay or something like that. If you've done things right at this point, you should find that pressing on the far right or far left stretches the other bungee enough that there's a decent amount of resistance and the package snaps back. It's important that these two be the same tension.

Then run straps or bungees left-to-right around the package at the front and back of the rack. If the "front" is too close to the front of the package itself slide it back a little as appropriate, of course. It's okay if these two are a little different in tension.

Essentially, I'm suggesting you run one strap/bungee on the right side like this: 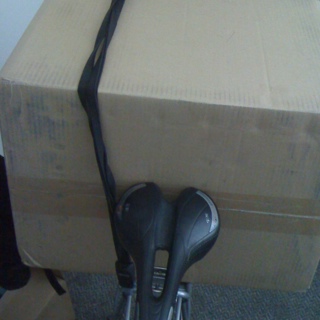 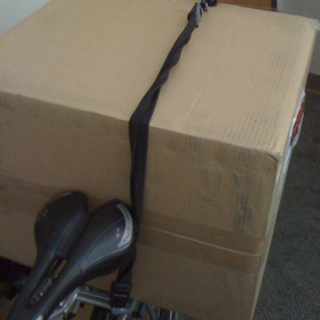 One left-to-right around near the front of the rack like this: 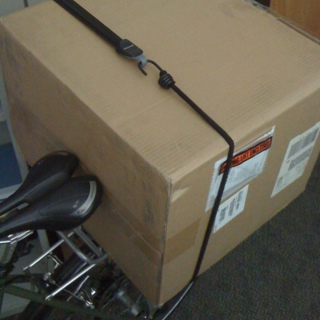 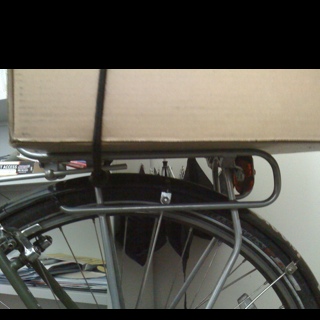 And one left-to-right nearer the rear of the rack (no picture).

Believe it or not, just both front-to-back bungee runs or the frontmost left-to-right bungee run is quite secure already, because any attempts on the part of the package to twist out of alignment mean stretching the bungee further. Combining both means it's also impossible for the package to slide out of the bungees.

I would avoid any diagonal strap/bungee runs, those will tend to pull the package twisted which is less stable.

I'd go with a tramping back pack (hiking pack). The only gotcha is they can come up high behind the head, interfering with the back of your helmet and limiting over-the-shoulder views.

I have an old external-frame pack, and if you unbuckle the canvas its essentially a pack-board. Works well for carrying things.

If you carry big packages often by bike, consider buying or making a trailer. A sack barrow and a hitch may be a good starting point. 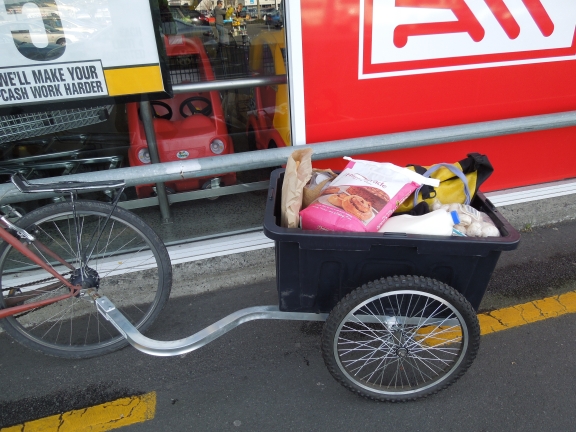 I just tried using a sackbarrow as a trailer, and it was workable, but not recommended.

That's a "trailgator" kids bike comealong joiner. The clamp that goes on the kid's bike's head tube is bolted to the handle of the barrow, the eagle-eyed will notice a spare crank arm used as packing for this test.

The arm can be almost twice as long, but compressed was long enough for this test.

On the other hand, it definitely worked and would let you tow the box or maybe 50 kilograms of stuff. I should have fastened it lower on the seat post, but that would mean the rack was unusable. 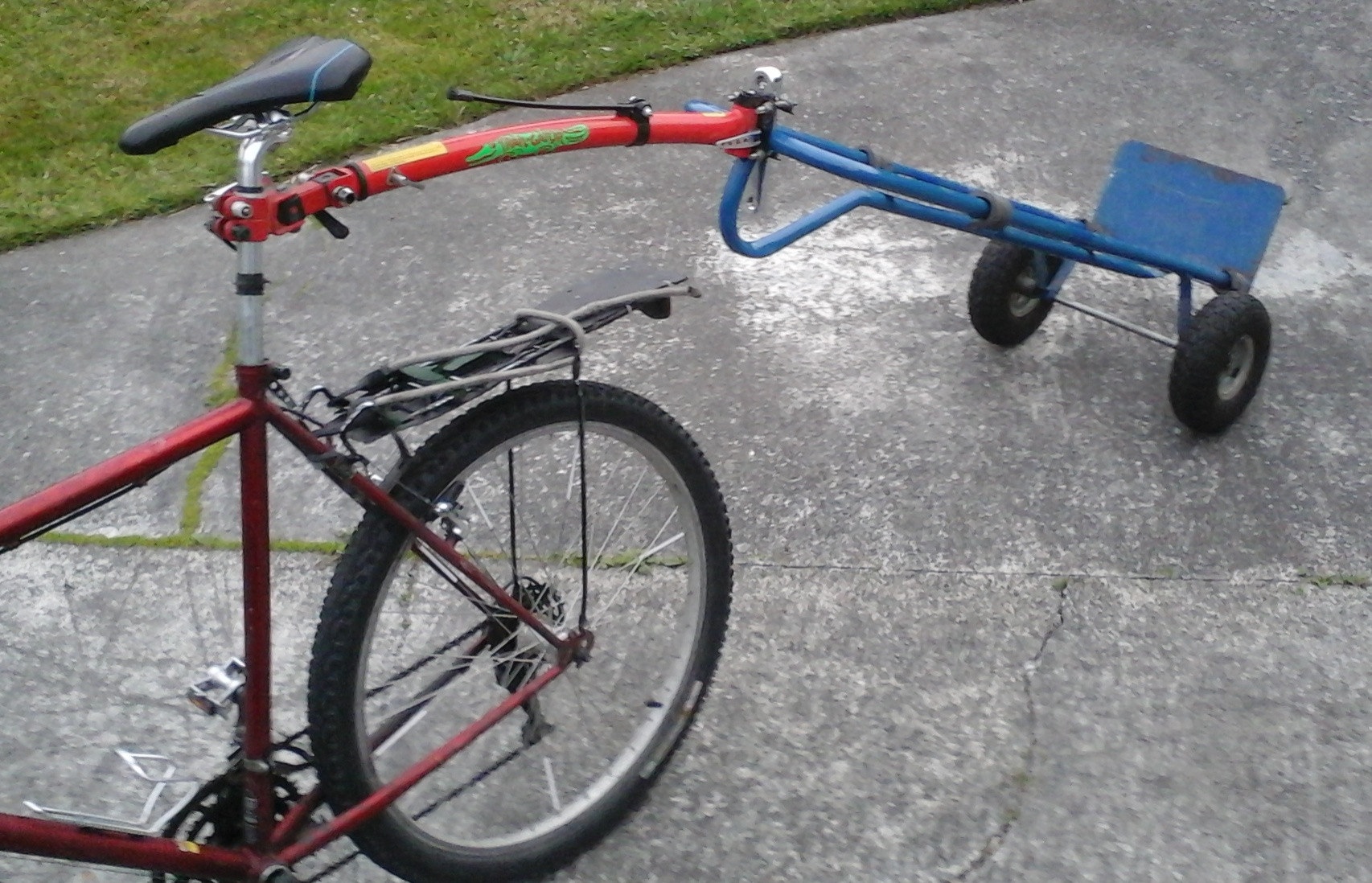 That weird black arm is supposed to clip to the kid's handlebars to stop them turning while being towed.

I have transported a lot of loads like this on my bicycle rack without problems. The load should be no problem for a usual bicycle rack but there might be a problem with the balance, so you will need to strap it down pretty good.

With strapping down comes more pressure on the package, that might mean you might need a more stable package.

For strapping I use old tubes. They are elastic, nearly unbreakable and if you form a knot it will not get off so easily. Another argument is that there is no scratching of your bicycles paint. Just use 3 of them, tie 2 trough the rack and one through the seatpost and you should be ready to go.

I always have an old tube on my rack in case I need to carry some stuff.

Not the answer you're looking for? Browse other questions tagged cargo technique rack or ask your own question.

11
What features are useful on a bike for carrying children?
4
What kind of bike rack can go with this bike?
7
What bike (carrying) racks are available for Pop-Up Campers?
1
best rear rack for fuji absolute bike?
2
Best Way to mount Wald rear folding baskets to the rack on a Batavus Fryslan
6
How to carry a large backpack on a bike rack?
7
Options for carrying a smart briefcase on a bike (pannier or otherwise)
7
Buying rear rack during pandemic crisis - go real bottom, up high, or wait?