Should V brakes be able to lock the front wheel?

I recently bought a folding electric bike for commuting by train, and braking has been a constant pain.

The shop has adjusted them most weeks, I've never had a bike need this much adjusting, but they won't even entertain the idea that they could be faulty.

Today, they've changed the brake pads, after less than 200 miles use, and when I've come test the bike, the front wheel doesn't come close to locking (nor does the rear of the bike raise off the ground), and the bike will casually come to a stop.

So, should v brakes be able to lock the front wheel?

Update To clarify, the bike has at times been able to stop much more sharply than it currently is, on delivery, the brakes were okay, and after each previous 'adjustment', so the weight is not the problem. It can 'endo', the claim by the mechanic is that it shouldn't be able to, and that configuring the brakes like this is fine.

A few details, which were requested in the comments: It has 20" wheels and weighs 18kg,

Here's a picture of it: 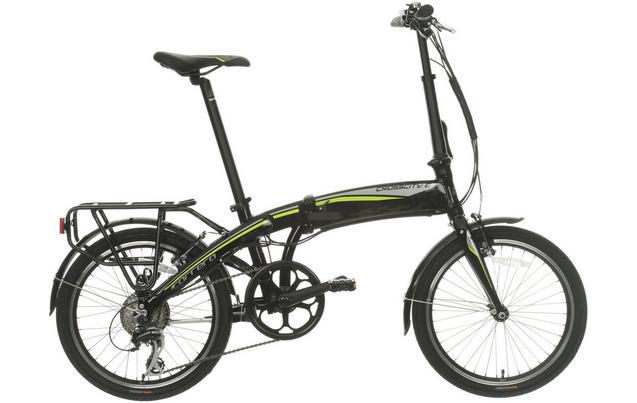 Regarding locking the front wheel, they are sort of correct: on paved surfaces and tires with decent grip the rear wheel should lift off the ground before front wheel locks.

However, it sounds like you can't lift the rear wheel either. A decent set of brake pads should last much longer than 200 miles and brakes should not be adjusted every week (unless you ride 2000 miles in a week), so it's probably best to switch to a different shop. It might also be that the brakes are just garbage and could be replaced with a better set. As mentioned in a comment, a brake booster arch might also help.

Back wheels with hub motors weigh a lot. The battery will also add weight behind the front wheel. The whole bike sounds light for an electric model though (is that definitely the weight with the battery?) Combined, this will make lifting the back wheel much harder than it otherwise would be. While the wheelbase is short, your weight is also quite a lot way back.

I've my locked my front wheel twice in 40000km of riding. Both times were on wet leaves on tarmac. It's just not something you do, so it's not a good test.

I have ridden an e-bike with poor front (disc) brakes. A little more back brake than on a normal bike was the only adjustment needed, similar to riding with a rear child seat. In both cases the extra weight means that back doesn't skid.

But v brakes with good pads should be able to stop the bike as hard as you're prepared to risk in terms of not skidding the front or going over the bars. After all, they were standard on MTBs until discs became affordable. I've never seen good pads on v-brakes when the bike is shipped. I upgraded mine to XLC dual compound, with much more stopping power (quite cheap on ebay). I've since gone for some Kool Stop dual compound pads because the XLCs were wearing out too quickly.

0
Extra screw after removing front wheel (plus enclosed hub brakes)
9
Why do we need front brakes?
1
My back brakes don't lock the wheel (skid): feature or a bug?
2
Persistent front wheel squealing: Replace the fork? Switch to disk?
3
Is it possible to remove wheel without loosening the (V) brakes
7
Front Brake Dilemma
0
Raleigh Alpine 4.2 Shimano front wheel and rear brakes assembly
5
Stopping power of mountain vs road bike
3
Front brakes need to be further apart to fit the front wheel through
7
How do I fix my front wheel that’s hitting my brakes?