On my bikes I find that I wear out the rear brake a lot faster than the front brake. In fact, I tend to avoid the front brake, and any time that I've used it exclusively, bad things would happen (like the rear of the bike flying over my head as I rush to get away from this flying heap of metal).

So I'm thinking... given that a disc brake system is just a pad that presses against the disc, has anyone considered attaching two completely independent sets of rear brakes to a single disc?

I suspect that one would need a single handle for activating both sets of rear brakes but I'm pretty sure it's not impossible. Apart from the obvious "your frame doesn't have mounts for two brake systems", are there any other reasons why this would be a bad idea? (Cost, weight etc. not being a factor.)

Clarification: my question is about the mounting of two sets of brake pads, specifically. I already know that two hydraulic lines can be merged (e.g., using Outbraker).

Clarification 2: just to reiterate (again), neither cost nor weight nor the complexity of the system are a factor for me, in other words I'm perfectly prepared to live with all of that, provided I get a more reliable, effective and powerful rear brake. The goal isn't just to reduce maintenance but to provide extra power to the rear brake. 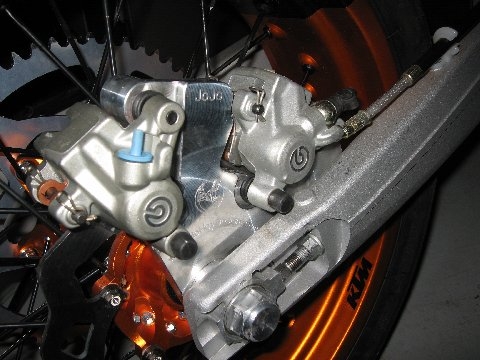 Update 4: I have accepted one of the answers below, but you should know that I'm definitely doing it -- going to install a second caliper on the rear brake, will probably also extend the size of the rear brake disc to the (rather expensive) Hope 203 rotor. Will post a picture and report when finished.

Update 5: someone might be reading this, so I wanted to give an update on something that I mentioned earlier - Outbraker, the two-hose variety. Basically this thing allows progressive braking with both calipers at the same time. I have installed it for a person who can only use the left hand for braking, and for that purpose it works rather well! The brake calipers no longer have a 'bite point' as the Outbraker acts like a time-delay mechanism.

The system you suggest has no benefit. The effectiveness of the rear brake is limited by the fact that braking moves your weight forwards and off the rear wheel. The brake you already have should already be capable of skidding your rear wheel. This tells you that the limiting factor isn't the power of the rear brake, but the grip of the rear tyre. Making the rear brake more powerful won't make you stop faster: it just makes you skid sooner. And bear in mind that skidding is not the fastest way to stop – that (and keeping control) is why cars have anti-lock brakes.

Instead, you need to practise using the brakes properly. If pulling the front brake sends you over the handlebars, you're pulling it too hard. Brakes are not binary: they're not just "on" or "off". Learn how much front brake you can use without endangering yourself (practise on a quiet street at gradually increasing speeds) and remember to brace against the handlebars as you brake so your weight doesn't flop forwards.

There are 4-piston disc brakes for bicycles that in a sense accomplish the same thing. Some have had 4 pads and others just 2 really big ones. The rotor's ability to manage heat is a bottleneck to the whole concept. You can of course get a bigger rotor, but at that point you're doing a lot of work to mitigate being nervous about the front brake, which leads to the next issue here.

The rear brake or brakes have slowed down the bike as much as they're going to once they lock the wheel. Getting that level of braking power in sufficiently demanding conditions isn't just a given, like how for example it sometimes might require a brake like the aforementioned 4-piston downhill/freeride brakes, but it's generally pretty attainable with existing designs.

Most cyclists who have been doing it for a while get pretty strongly opinionated against any brake system that downplays the front brake. The reason is that physics dictate that for the bike to stop as fast as possible, you need to stop the front wheel. It's best to develop mastery with the front brake, because you need it for emergency stops.

The easiest way to have a redundant rear brake is to have a rear coaster brake with a rim brake or disk brake.

One could argue that fixies with rear rim brakes are doubly redundant.

Of course as David Richerby is pointing out, the real problem is your lack of front brake control, not with your rear brakes.

Focusing on the question of adding two brake systems to the same wheel:

I had a tandem that had three brakes - front and rear hydraulic rim brakes and a hub-mounted cable-operated drum brake which was for limiting maximum speed on a downhill.

The drum brake was set with a barend shifter, and was very much Set and Forget for the descent. This is quite common with touring tandems, and rare but not impossible on a touring single bike.

There is nothing stopping you fitting Rim and Disk brakes to a bike, as long as it has proper stops on the frame. Bolt-on disk brake mounts are useless hacks so avoid them.

Some bikes have caliper, canti and disk mounts on forks and/or stays, so you could have up to six separate wheel brakes, plus a coaster in the rear or drum/roller brake on the front and rear. However some riders would call this a mild case of overkill.

Your main problem with anything above 2 brakes is control. You only have two hands, and trying to run two brakes with one hand is going to give extra cognitve load in an emergency. Partial workaround could be two hand brakes and a pedal brake.

Side note:, you have another speed reducing system which is your posture. If you're descending too fast, you can sit up and catch some wind with your torso, and splay your legs to catch wind with your legs. Being less aero will reduce your top speed to something less exciting and more manageable. Not a braking system as such, but a valid technique anyway.

Some tandems are set up with two sets of rim brake pads, so that both riders can brake independently. But the limiting factor here is heat dissipation -- both rims and disks can heat up with prolonged braking to the point where braking effectiveness is compromised, and doubling up on the pads only speeds this process.

If you want maximal braking while minimizing the over-the-top risks of the front brake, and complexity is not an issue for you, consider the scheme I've suggested before: A front brake which is activated by the rear one.

18
How does the SureStop braking system work?
6
Why would my rear brake pads wear faster than front?
0
How to decelerate effectively with a rear brake?

0
Are the rear brake mounts on my Boardman Team HT post-mount or IS?
3
What rear brake should I get for a Surly Steamroller?
4
What type of brake is this?
10
How can a recumbent tadpole trike brake three wheels with only two levers?
5
Can a Shimano BR-M965 caliper be replaced with a newer one?
18
How does the SureStop braking system work?
7
Front Brake Dilemma
1
BR505 disc vs Ultegra 6800 caliper
11
How to decelerate during long downhill rides and avoid brake glazing