Someone built me a small, custom recumbent bike recycled from older bike frames. He did a generally decent job, but seems to have messed up placing the rear canti studs. They should have been spaced inward toward the rim at least 5mm per side. At least, that's the estimate I get doing some measuring and initial setup. Where there's only about 4mm of pull left there (pads are contacting the rims at that point) there should be about 40-45mm between the noodle end and the right lever -- according to tektro's directions. 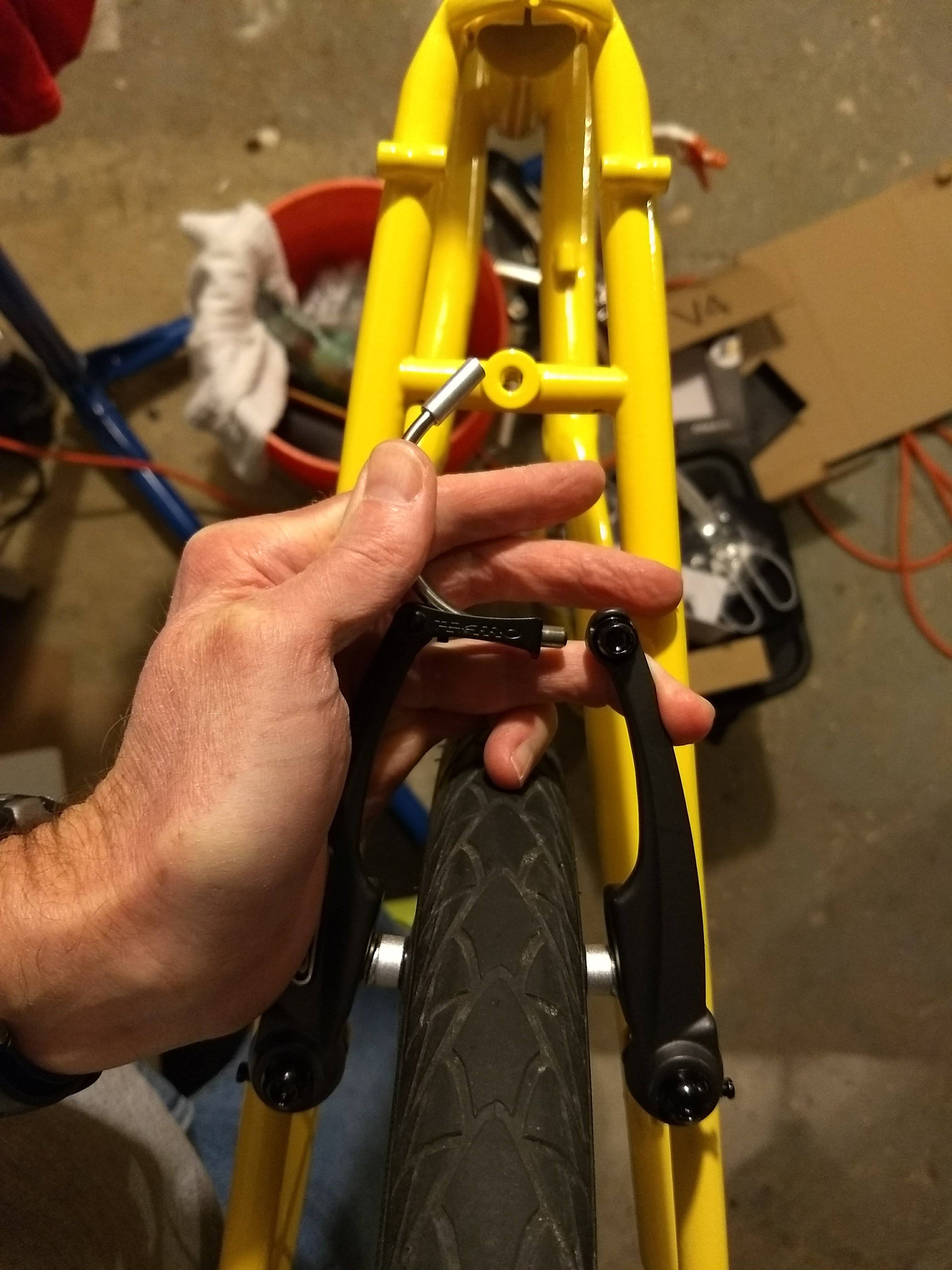 I had first hoped to solve this problem by finding longer threaded post brake shoes. No one seems to market anything like that as a feature. The posts on these are 25mm, which look about the same as any others I've had in the past. I found nothing longer.

Next, I tried to approach this with a pair of female-male m6 spacer on each side, but I can't get enough male threaded post to install correctly.

My other potential option is (not my fave) canti brakes since he did put a canti stop bridge up top, just out of the photo. However, I'm not sure I won't have similar issues with the spacing, depending on post length. It appears that if I use a smooth post canti, like an altus, I might be able to get the far enough inward, since they secure by a loop pulling on them perpendicular to the direction of the post. (Probably should have gone for the canti brake first -- cheaper than the spacers were!) 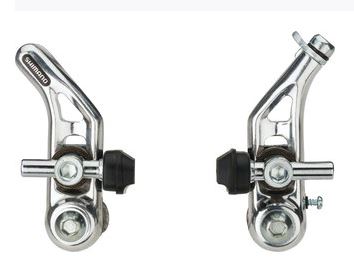 But not knowing the length of those posts (anyone?) I wasn't sure they'd solve the problem, and I wanted to avoid having to buy new brake levers as well, plus match the front brake to the back. (On this bike, the front doesn't carry much weight, so it should really have a weaker brake than the back to avoid locking up and washing out...)

The final option that I brainstormed was to use some 5mm or 7mm thick by 20mm wide aluminum stock and build a short adapter that attaches to the inside of the brake arms (toward the rim, thus providing the inward spacing) and secures with an M6 screw to the brake arms where the shoe normally mounts. Offset about 8mm to the side (opposite, across the arm center point, for max rigidity) a 6mm hole to mount the brake shoe as normal, with the beveled spacers for making angular contact. Up/down would be accomplished with the normal slot.

That would give me the spacing and the pieces are thick and short enough that they shouldn't flex much. It's a couple hours work with hand tools, I guess.

Adding sketch. The stock I've got is good quality, pretty stiff, and mounting as shown in the sketch actually places the shoe post a similar distance from the middle of the lever arm as the stock mounting slot, and the flats of the middle of the arm are pushing the adapter toward the rim too. Second photo shows midline of the brake arm better than my sketch. 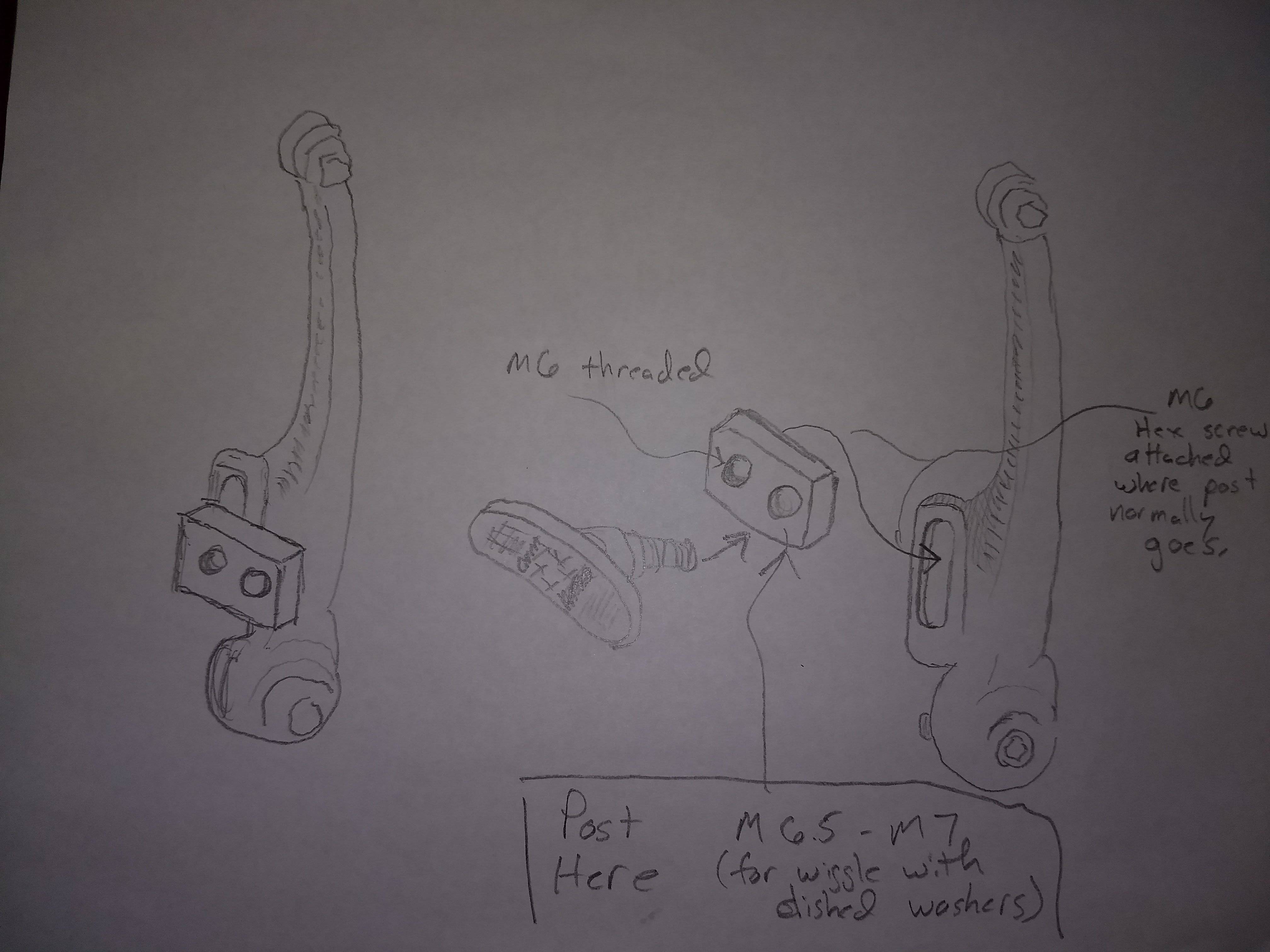 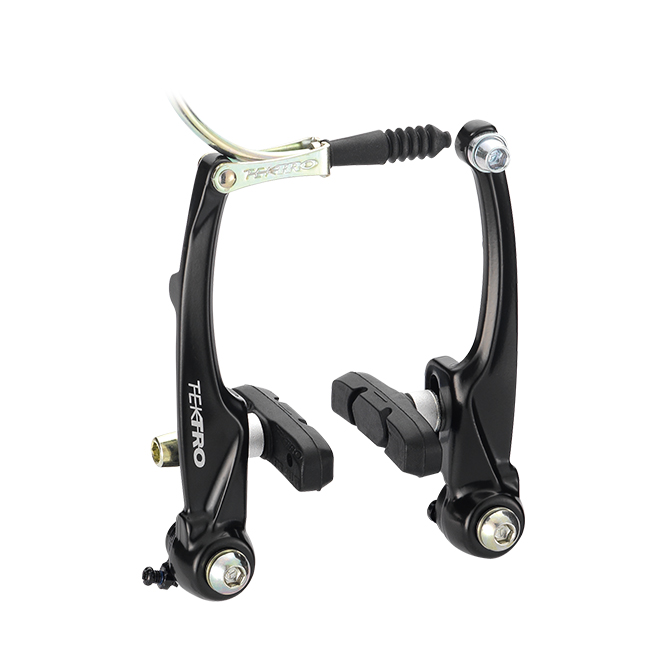 Anyone ever run into a similar issue? Anyone know of longer threaded post shoes or happen to know what the post length is for smooth post canti shoes?

Builder is willing to take it back, redo the rear end, which would mean re powder-coating as well, plus two trips shipping across the country. He won't charge for the fix of course, but it seems like a lot of effort and material, so I'd like to explore less resource-intensive options first.

Failing longer studs, taking any and all ideas!

A rear wheel with a wider rim could make up the gap, depending on what you have in there now. There are a wider selection of wide rims available now, although I do not know if this extends to smaller wheel sizes. Wider rims will likely mean running a larger volume tire, but there is plenty of room.

Fwiw the closest thing there is to a standard is 80mm post to post. Comparing that number to what you're working with may be helpful. Rim width does of course have an impact; 75mm is supposedly a better number if it's known that road rims will be all that's used.

The genre of brake that I think would work the best are traditional wide-profile, long-armed, smooth-post cantis ala Mafac and similar. The reason I say that is the mechanical advantage characteristics of that type of brake get screwed up the least when the starting position of the arms is splayed in from the more intended starting point. If you can make a low profile canti like an Altus work without running into that issue, then fine, but it's going to depend on what the post to post distance is.

There are v-brakes, mostly early and/or cheap ones, that use smooth posts. They might buy you some millimeters but I don't know that you'd be able to get them so extended as to solve this.

Edit: Depending on what width rim you've got now, going with a wider rim could help the situation, although judging by the picture I doubt it would solve it all by itself. Sun Rhynolites are cheap and make good rear recumbent wheels by their own right.

Thanks for tall the input, folks. I made spacers and they do the job of moving the brakes in, but they introduce some funky angles and make the brakes come in heel first, and interfere with the tire sidewall, so that's not going to work out.

Unfortunately, the answer is going to be to send the frame back to the builder to have him redo the canti studs and re-powder coat the entire thing.

This is a collection of thoughts rather than a real answer, but pictures don't work in comments.

Some v-brake pads have permanent shoes in which are fixed replaceable pads. I'm sure I've used some in which the stud was a normal M6 bolt, which you could swap out by removing the rubber pad. However the ones I currently run (Kool Stop) use a custom-headed bolt: 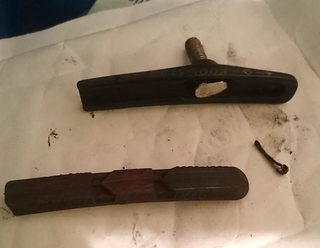 Maybe this will jog someone's memory, or maybe you can look around for ones that use a similar construction but the usual spherical washer arrangement for alignment.

Alternatively if you're prepared to use the spacers you bought already, you might be able to make them work on these pads, as you don't need nearly so much male thread for the alignment. You may need extra nuts/spacers, and a lot of care and threadlocker -- I'd be cautious about extending the thread giving that you're relying on a single point fixing to stop you.

Canti pads have a much longer post. Unfortunately at ⌀7 mm I reckon it's too thick to cut an M6 thread unless you can find them with alloy posts (I've got a few different ones but they're all steel; online I find rumours of alloy posts).

Not all v-brake pads have the same length of stud. Unfortunately I think you've already got fairly long ones. I have some cheap but effective XLC pads with 25 mm unlike the ~22 mm of my other pads.

Finally, there exist v-brakes which take canti pads. I have some on an MTBSO I use as a shopping bike but plan to keep outside work: 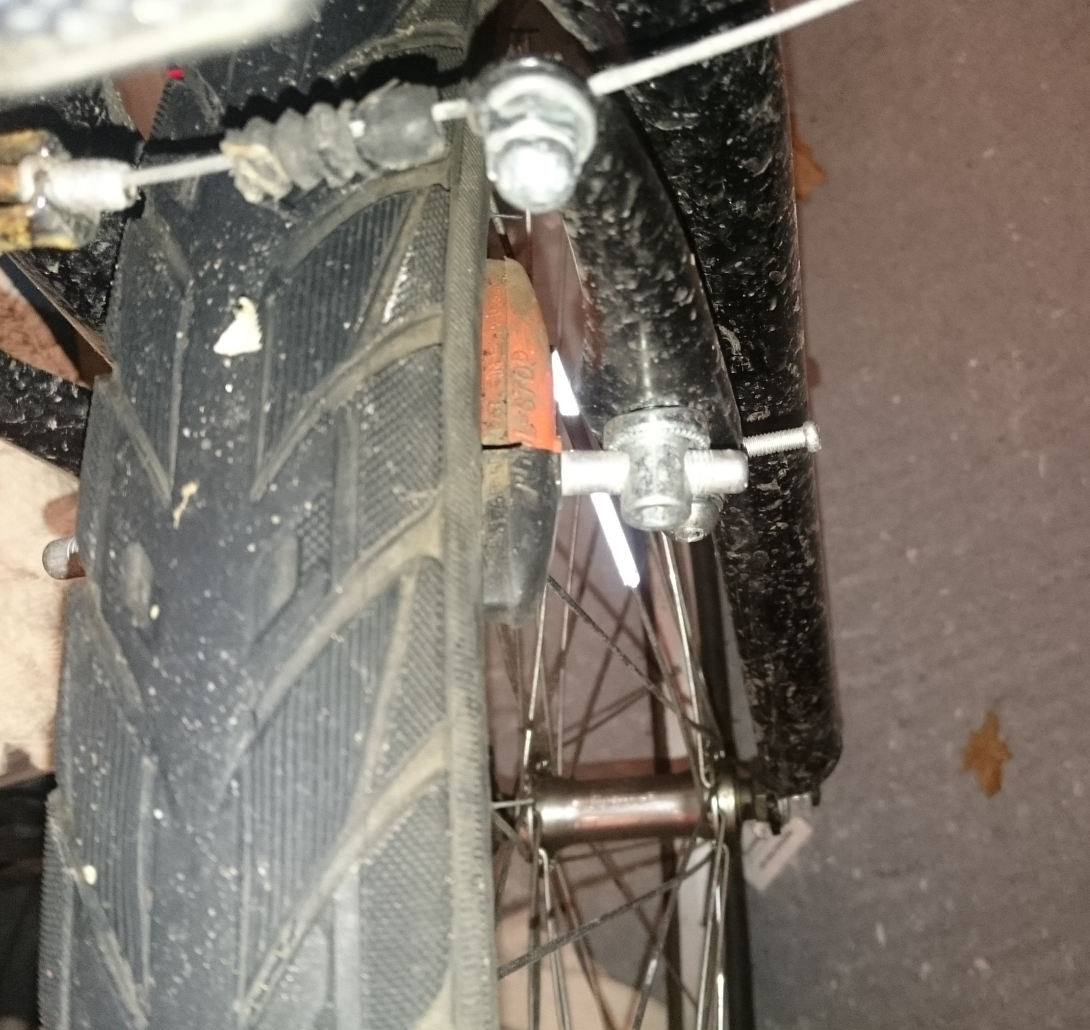 These are cheap and nasty, and came on a bike I date to early 2000s (which seems like the forks were badly built, if you're wondering why the brakes look wonky). They might help, but on the other hand they might not, as the canti adjustment method needs a little more length than the typical V-brake method.

5
Dia Compe Brakes for 1991 Bridgestone RB-T
1
When to tune/replace brake cables for optimum tension
3
Is it possible to reattach the v-brake spring/pin arm?
1
Threaded post V brake pads
6
What are the reasons for these two very different post mount adapter designs?
0
Caliper adjuster for Shimano 600 brakes
3
How to find a model number that replaced an old Shimano part
4
Shimano BR-T4000 not compatible with frame pivot stud
6
Do hydraulic road brake levers exist that do not include shifters or dropper post buttons?
4
Brake post broke off the boss. How do I replace it?