How to fit rivnut / nutsert to frame?

I have an old steel frame road bike, dating from 1980. Its not rare or special, but its very like the one I rode to high school in the late 80s.

Problem: There are no bottle cage mounts, so my solution is to drill 4 holes and fit rivnuts to suit the standard bottle mounts. Rivnuts are also known as nutserts, and look like this:

There's a special rivet tool that compresses the fitting while preserving the thread. I have one on order, and it looks like this. 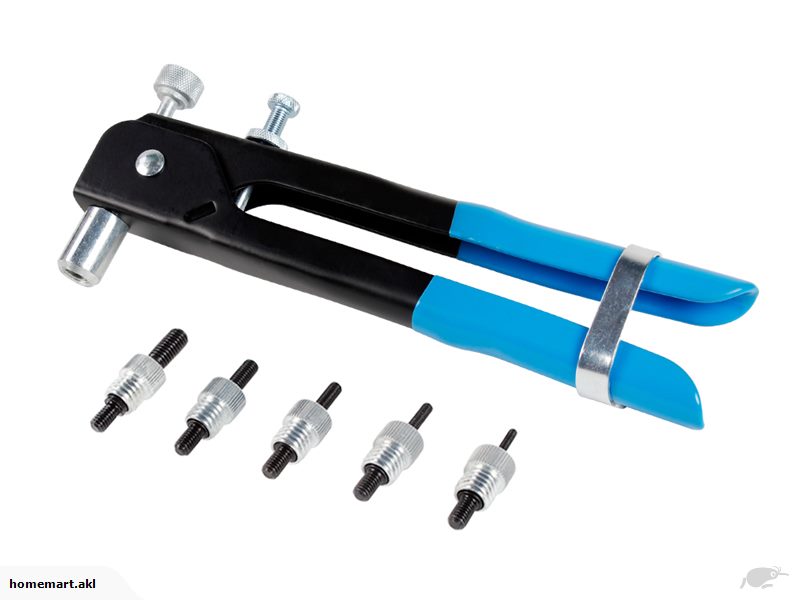 So other than drilling the bare minimum diameter holes in the frame, what else do I need to consider?

I like the idea of using epoxy. Making sure it compatible with the materials being used. One issue with the nutsert on a tube is there is only full flange contact at the 12 oclock and 6 oclock positions. This makes it susceptible to becoming loose from side to side loads. Follow the manufacturers directions for the exact drill size required. Depending on the frame design you may need a right-angle drill or a short bit to get the correct position.

Job completed - it worked well. Starting off with the finished product: 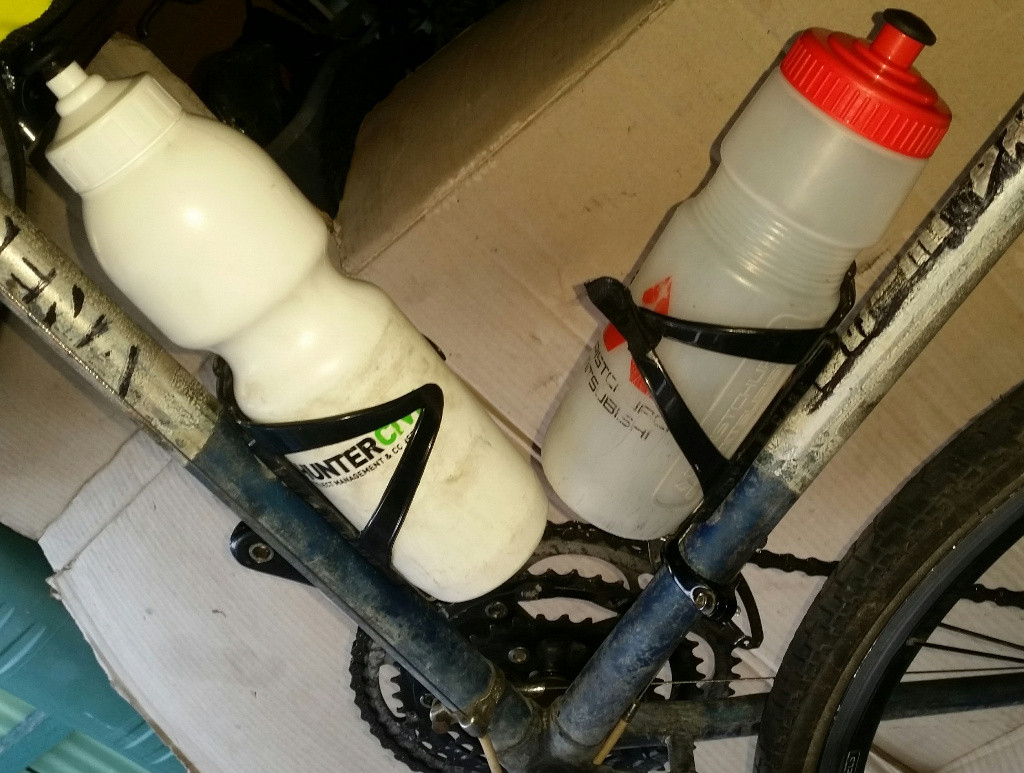 Start by measuring accurately. I put a bottle in each cage and then tested placements, considering the band-on clamp for the FD and the toolbag I have in the front of the frame triangle, which lead to a slightly high seat tube position, and a slightly low downtube bottle. 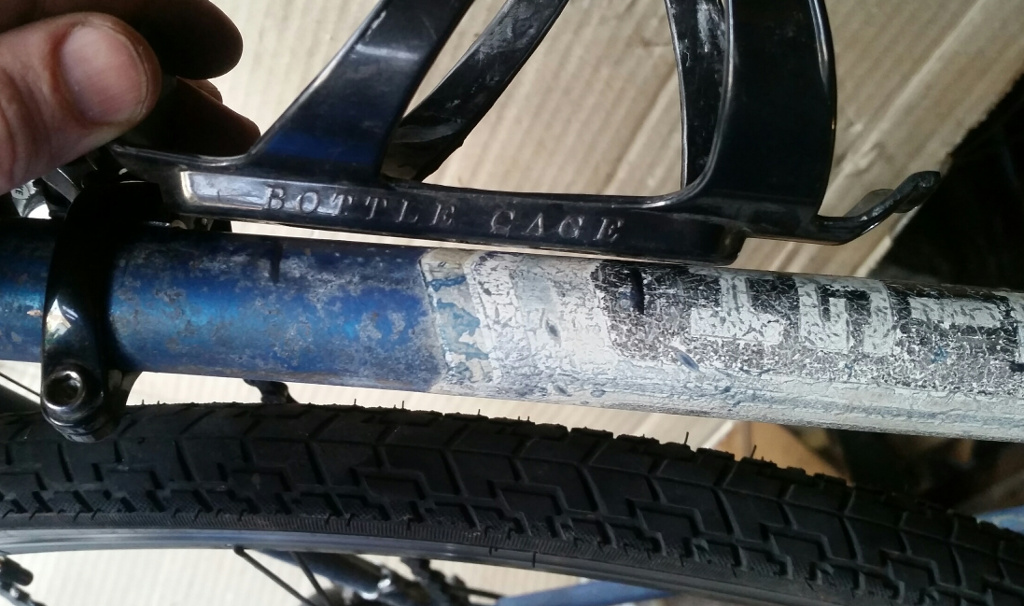 Then I used a self-powered punch to put a divot in the center of the tube. Be accurate!

Upper seattube hole is drilled, lower one is part drilled. I started with a 2mm bit, then stepped straight to a 5mm and finished with a 7mm. Probably better to go 2mm, 4mm, 6mm, 7mm. I tried to catch the swarf with grease, which was only moderately successful. I also tried a magnet, and a greasy paperclip in the hole to fish out swarf and chips. See painting comment. 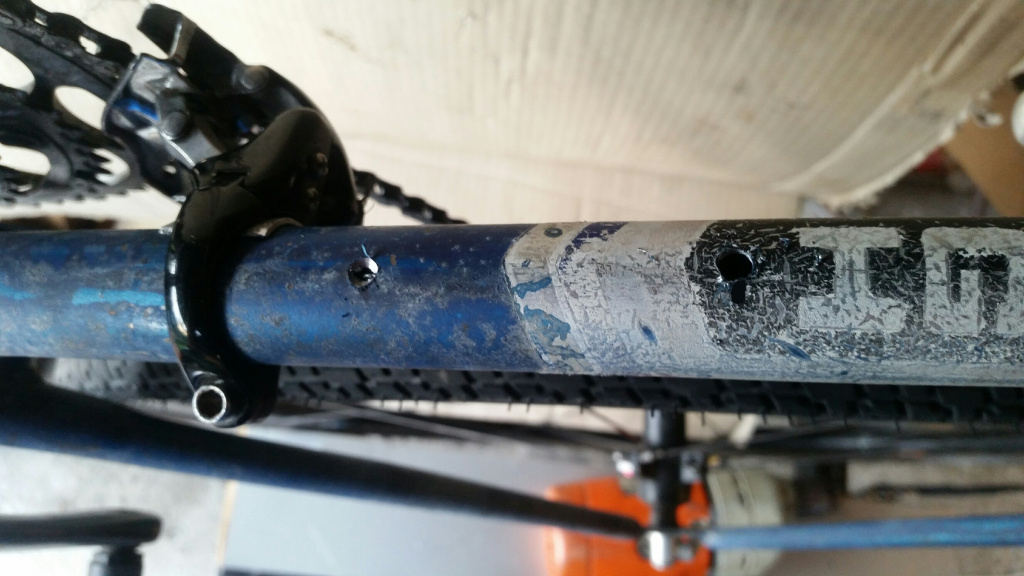 Close up of hole. The edges are slightly raised, and as Mikes pointed out its not a flat contact area. So (no pic) but I gently filed that lip off, and flattened the edges of the hole at the 12 and 6 oclock position to help the insert sit flatter. It worked well. 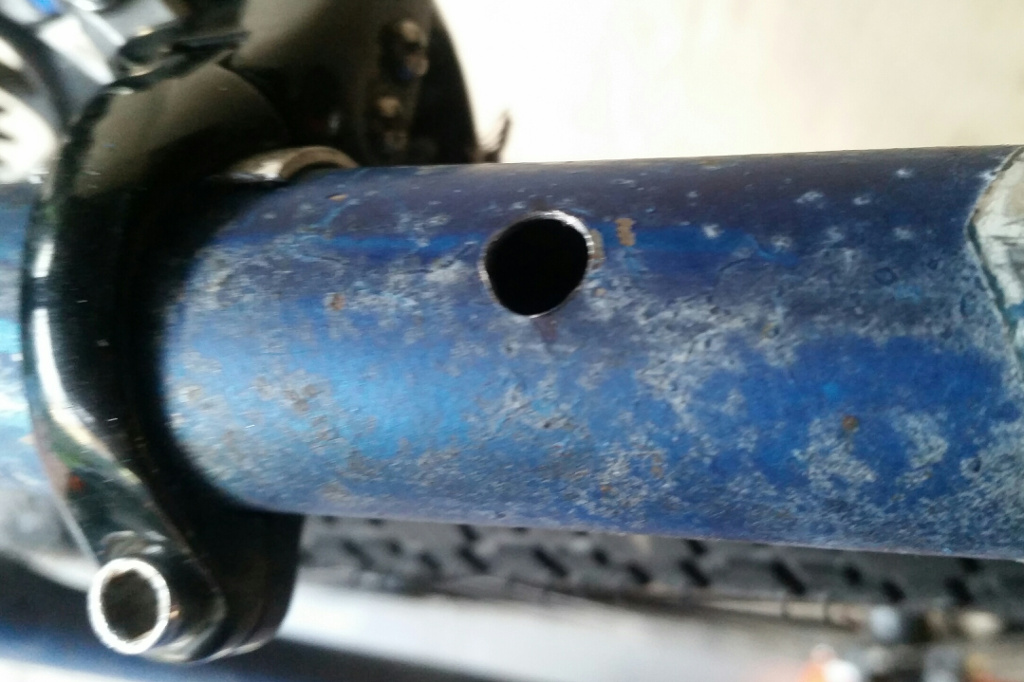 Here's the nutsert / rivnut / insert about to go in. Its got a light coating of clear epoxy on it, which may not have been needed. 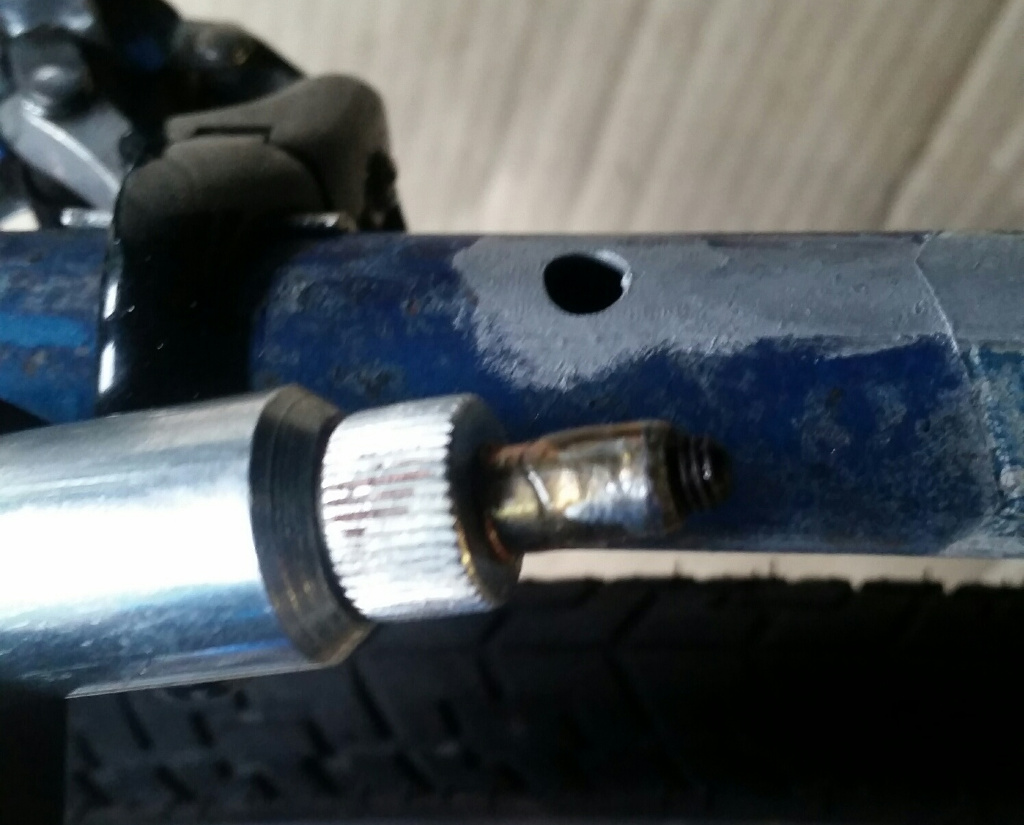 When drilling, it was easy to drive a bit hard and clonk the drill bit into the far side of the tube. The tapered reamer didn't work for the same reason. So to protect the bare steel I sprayed some zinc-based paint on the edges, and into the hole to hit the far side.

Finished fitment. The paint's not great (okay its pretty awful) but the insert sits really close in and has no problem with M5 bolts. 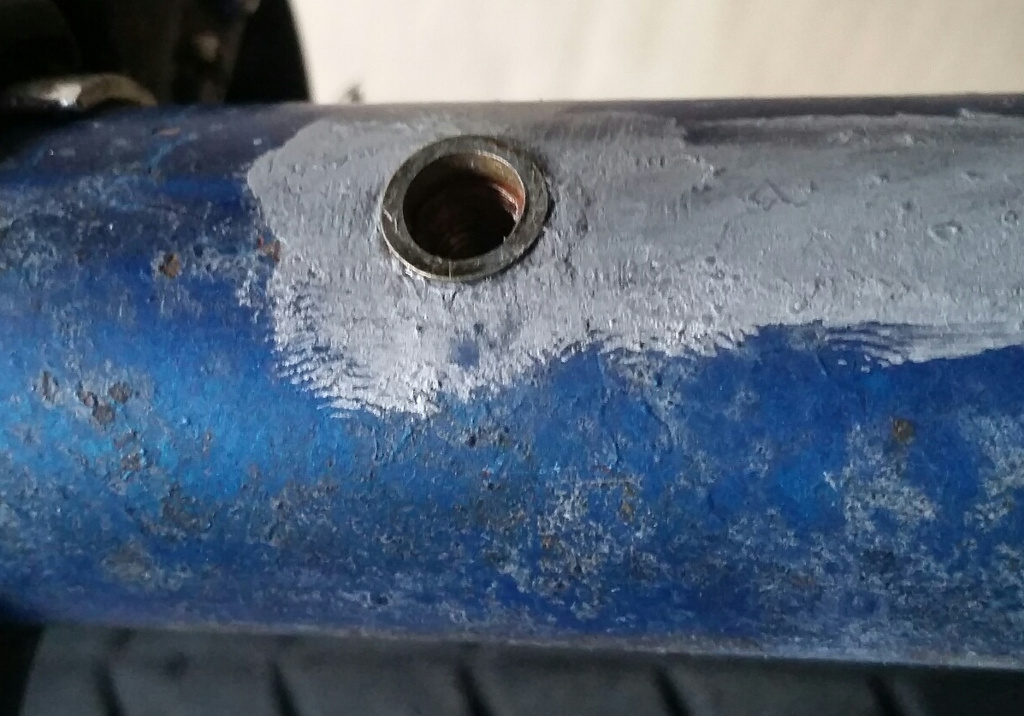 Here's the top-side of the downtube before bolting on the cages. 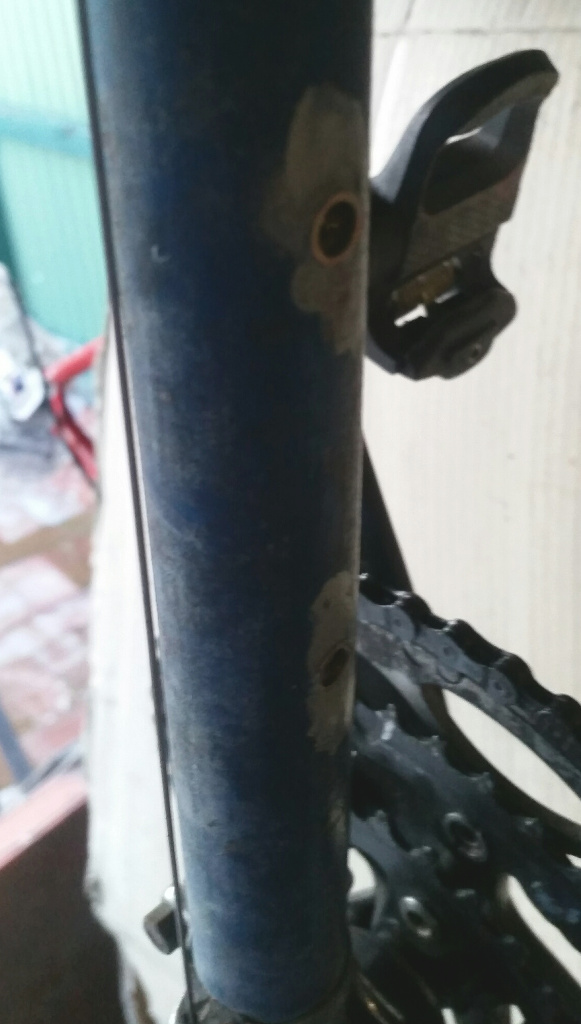 Not the answer you're looking for? Browse other questions tagged tools braze-on bottle or ask your own question.

6
How should I restore braze-on brake cable housing guides?
12
Attach bottle cage to frame w/o mount screws
2
FSA Omega MegaEXO Press fit BB 19mm removal (non standard BB86)
3
Does every drink bottle fit into every holder?
5
Is it possible to increase maximum seatpost insertion length by filing down a seat tube bottle cage mount boss?
1
Bottle on frame alternative
1
How to tell if a chain should be replaced with park chain checker when it doesn't fit?
1
How can I fit this bottle holder to this bike?
2
The eyelets/braze-ons on my bike's seat stay are on the inside, not on the outside. Which Rear Rack will fit it, if any?
2
What are the Trek Domane frame bottom hex screws for?