It is a Bosch powerpack 500 and the other day it stopped charging.

The charger seems to have some output since one of the LEDs on the battery lights up. It is only one LED though and I believe I remember the other LEDs (in the column of LEDs) light up in a fashion when charging.
I only measure 5V of output from the charger which might, or might not mean something. The charger can be so cunning as to output only a low voltage until it has found out a proper Bosch battery is attached and is ready to be charged.

I have tried taking the battery out of the charger and depress the button for 10 seconds as I have been told it resets the battery but to no avail.
I have unplugged the charger, waited for some time, and replugged.
Nothing is running hot, not battery nor charger.

I am taking both battery and charger back to the shop but before that, is there another trick or check?

For future reference I add what has happened so far:
The dealer has software with a license dongle s/he had to buy from Bosch. S/he connected a computer and saw some logs about the battery being too hot (I am certain it has not been) or cold (inprobable) and it being bricked due to hardware failure.
S/he saved the log and then resetted the battery. I can now use the battery again. Bosch has commented the error log with "no danger".
So Bosch bricked my (very expensive) battery without any reason and then forced me (the dealer) to pay for a solution. That is not serious business.

Here are the indicator lights and reset procedure straight from my Bosch e-bike training manual. 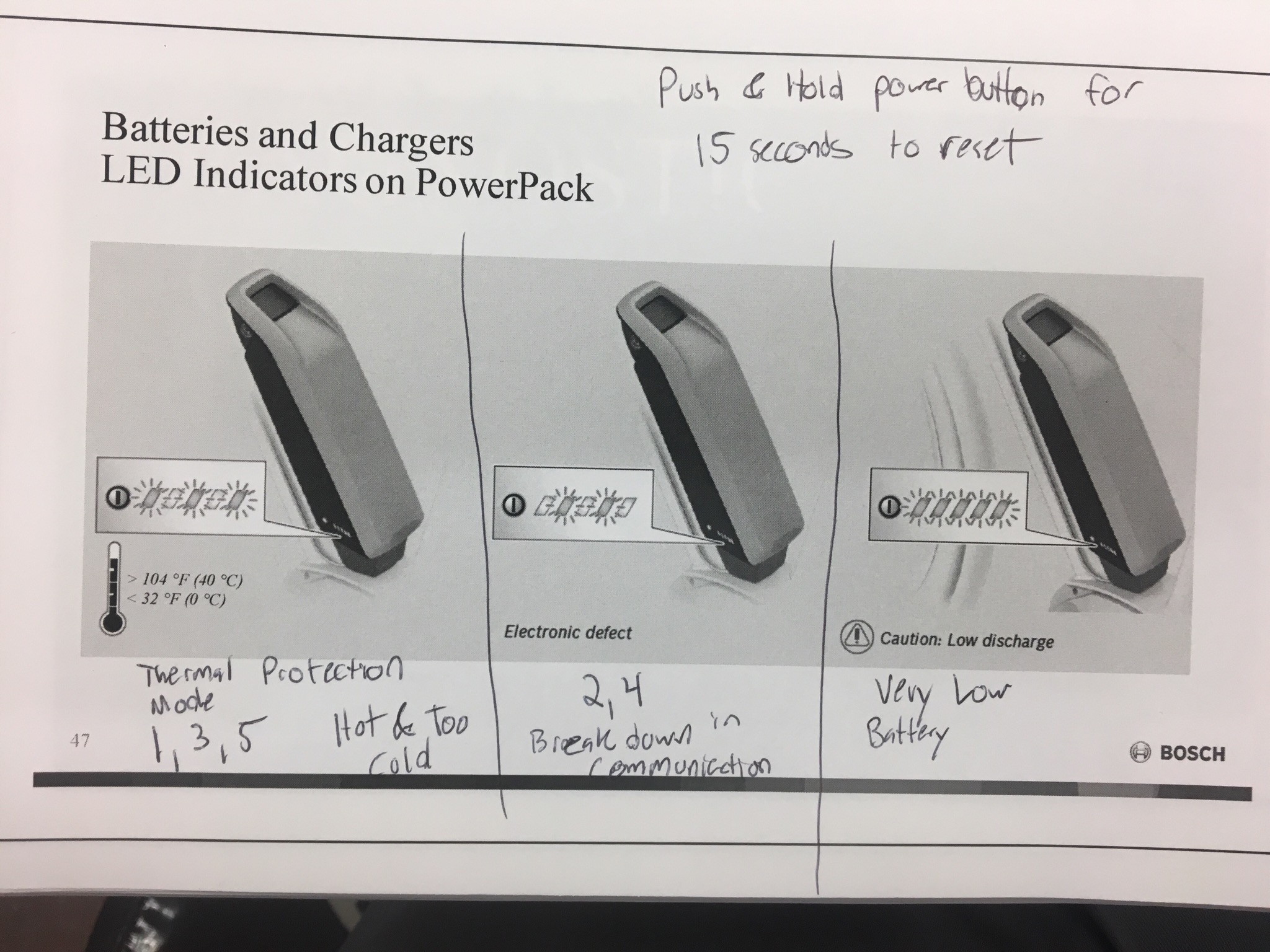 Voltage from the charger should be 5V so that doesn't seem to be the problem (See if it matches up with what is printed on the charger (either you have the 4 amp or 2 amp charger)).

The battery does have a built in management system (BMS) that safeguards against overheating, overcharging, short circuiting. As per the picture, you need to hold the button for 15 seconds to reset the battery, not the 10 seconds you wrote about. When the battery is critically low and gets recharged, you will need to do that reset.

I would recommend going into a Bosch certified shop if that doesn't work as they will have the dongle and access to the diagnostic software.

It could be either the battery or the charger:

Summary: check the charger first. If it’s the battery then swap it out if you’re under warranty.

Not the answer you're looking for? Browse other questions tagged electric-bike battery or ask your own question.

3
Kalkhoff Agattu (e-bike) Panasonic 24v engine dead - worth repairing?
9
Charging eBike Battery with Solar
0
Best solution for additional (dual) battery for E-bike
1
eBike: use 48v motor with 36v controller and battery
1
E-Bike Battery not working
2
Is it safer to remove a battery from an ebike before charging it?