We often get questions on bicycles.stackexchange about fitting wider or narrower tires to bicycles. We have a large number of these with answers suiting the specific bike or style of bicycle in question, but I have been unable to find one that provides a generic answer covering off all things that need to be considered. For most bicycles, the answer is the same regardless of the specific style and sizes of tires in question.

This is intended as a canonical question that we can point closed questions to.

Maximum tire width is dependent on two main factors, clearance at the frame/fork, and the width of the rim.

As for the frame clearance this can usually be visually inspected and easily distinguished if a larger tire than the present tire will cause issues. Brakes such as V-brakes or cantilevers may also cause clearance problems with some tires so attention should be paid to them as well.

Mud or other debris should also be considered for mountain bikes and applications with fenders/mudguards. You should not run clearances so tight that one little pebble caught in the tread will hit the frame, fenders or other parts.

Think of the difference between both sizes you are considering and then split that number in half, that is the distance you will need to be able to clear on either side of the tire at the chainstay essentially. So if there is a 4 mm difference in road tires, the new size will roughly add an additional 2mm onto either side of the existing tire is one way to think about it, but the top of the tire needs to also be checked as the new tire may also be taller in addition to the increased width.

Knobs on MTB tires can also vary greatly and play a part in your decisions and fitment as well. One 2.25" tire may come out to be shorter than another more aggressive 2.25" tire due to the shape and size of the knobs.

As for rim to tire interface there are multiple guidance charts available online that give a rough estimate if a tire is compatible with a certain rim width, such as this one from J&B Importer's, a bicycle parts distributor's catalog. 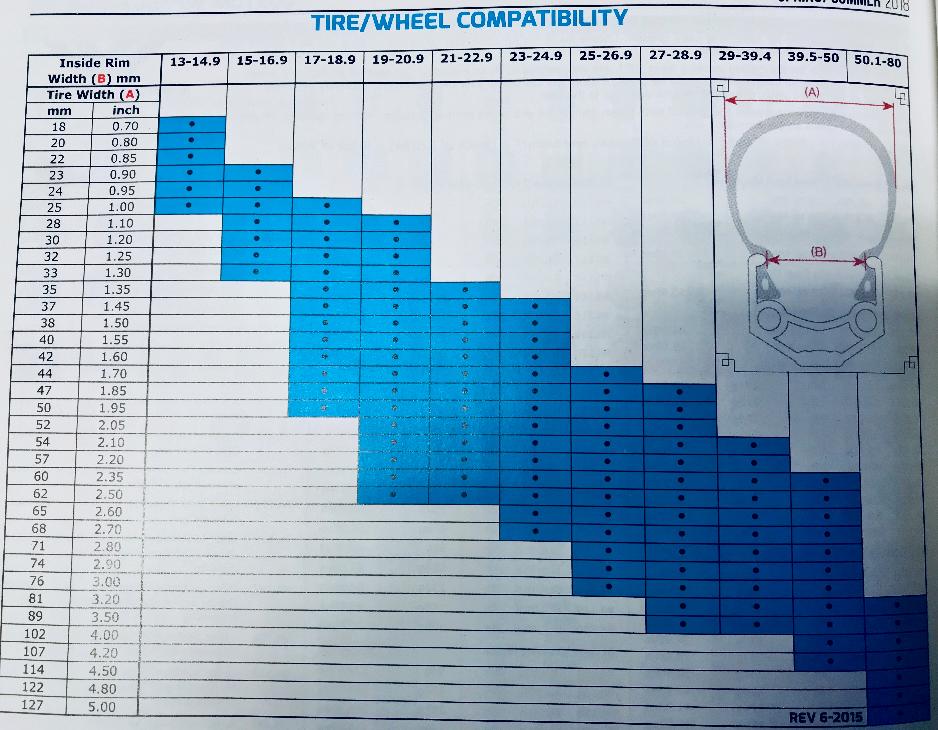 However just because it will fit on the rim does not mean it will not rub on the frame so that is what is most important.

To be certain, the model of rim should be referenced and the width noted.

Please also note that the same applies to going to a smaller tire size, too small of a tire on the same rim could not seal well and potentially cause flats or blowouts when the tire bead cannot seal against the rim well enough.

I was investigating the source of the document in Nate W's answer. I discovered enough new information to warrant writing a new answer. Basically, the maximum tire size that you can fit is very likely larger than what's specified on the chart.

While answering a different question, I referred back to this question and answer, and I realized the ISO standard may be a bit dated. For example, many performance road bikes made within the last 5 years come stock with 25mm tires (note: that's nominal width, i.e. the width printed on the sidewall, rather than width as measured), and those tires were technically out of compliance with that questioner's rims.

On further research, the tire size guide Nate cited stems from the International Standards Organization (ISO), standard 5775. That document was published in 2014/2015, and it appears to be under review at the time of writing in 2020; ISO reviews its standards every few years. The documentation of the standard is gated. However, in 2016 Bikerumor appears to have published a table based on the ISO standard, reproduced below. Note that it's similar but not identical to the documentation that Nate gave. (NB: you almost certainly have "crotchet type" rims, which have bead hooks; some modern drop bar wheels are hookless, and these would be "straight side type" in the chart.)

In the Bikerumor chart, it appears that the ISO only approved 25mm tires on rims with 13mm to 17mm internal width. However, many clincher rims in 2020 have 18 to 20mm internal width. A number of new carbon wheels from the likes of Zipp, Enve, and Roval have internal widths of at least 21mm. I have had 25mm Continental Grand Prix 4000 S-IIs mounted to rims with a 19.4mm internal diameter for at least a year, and I've never experienced a blowout (NB: these tires measure 27.6mm or so when inflated; they were notably wider than the nominal size). Worse, Zipp's 303 Firecrest wheel has an internal width of 25mm. Since it's a hookless design, it appears that the smallest tire that ISO approves would be at least 45mm in width. And yet, Zipp recommends a minimum size of 28mm.

If the ISO specs are correct, a lot of people on current generation wheels should be experiencing some sort of tire failure, and yet there doesn't appear to be a spate of such failures. So, the ISO specs are wrong. But where does that leave current riders whose tires and rims don't fall into the officially approved list?

I'd expect the standard to be updated soon. Hookless rims are ubiquitous in cars and current mountain bikes, but they may only just be starting to make their way to drop bar bikes, and then mostly for carbon rims. Removing the bead hook does simplify the manufacturing process, which potentially reduces cost. It also may smooth the tire/rim interface, improving aerodynamics slightly. The new ISO standard might revised to account for the tire width issues mentioned above and the advent of hookless rims on performance road bikes.

Note that the approved tire widths in the Bikeradar chart and the J&B Importer chart differ slightly, although many are similar. Bikeradar's chart lists 23mm tires as compatible with 13 to 16mm internal width rims. J&B's lists 13 to 17mm. For 25mm tires, Bikeradar's chart says 13 to 17mm rims, whereas J&B says 13 to 19mm. It's possible the charts are both based on different revisions of ISO 5775.

Finally, note that Jan Heine of Rene Herse Cycles might disagree with many of my statements above. He states that if the rims are too wide, the tire pressure won't push the bead against the bead hooks strongly enough to retain it. This could lead to tire blow out. He does admit that the ETRTO chart is conservative in this respect. He has a rule of thumb that the internal rim width should be at least 20% narrower than the tire. For a 25mm tire, this would suggest a maximum internal rim width of 20mm. Even so, this puts my main set of wheels in compliance with my usual 25mm (nominal width) tires. However, this suggests that Hed's tire width recommendations for its Jet rims, and the similar Belgium rims, are too narrow (at 21mm internal width, they should have at least 26.25mm nominal tire width by the Heine rule).

The minimum is dictated by the width of the rim. Sheldon Brown has tables, here: http://sheldonbrown.com/home.html

The maximum size depends on the space between the stays at the rear and the width of the brakes and the space under the mudguards where the tyre has to fit. This has to allow for the dynamic shape changes the tyres undergo while you're riding and for mud or debris sticking to the tyre itself, if you don't want to be thrown off the pony by a locking wheel.

These are no laws of Nature. If the size works it's OK.

In practical terms, people usually seem to ask this question because they need to replace a tyre on their bike but can't find tyres in exactly the same width as the one they already have. Unless the existing tyre was close to the limit of what will fit, using a slightly different width (e.g., and eighth or tenth of an inch, or a couple of millimetres) is going to be fine.

Another gotcha is the fit of other parts around the tyre.

V brake arms are pulled in toward the side of a tyre as you brake. So a close fit here can mean interference once they close up. This would be exacerbated by worn down brake pads.

I personally have a 28mm tyre with a shimano 105 rear rim brake where the underside of the caliper's arms touch the tyre if my inner brake cable is slackened-off. Mind you I can'f refit that rim if it has an inflated tyre, so tolerances are quite tight.

Mudguards/Fenders can have a problem with larger tyres too - though these are generally quite adjustable.

Toe Strike Slightly unusual, but if you're going to aggressively knobbly tyres then its possible for your toe to clip the knobs while turning. If you had smoother tyres, then catching the knobs with your shoe can catch where the original tyres might just rub.

I have never utilized a formula, or some all-purpose rule for determining tire width. often I rely on frame manufacturer specifications. there are too many variables, such that it's easier just to eyeball it (for me, anyways). tires can measure wider or narrower than their specified widths, and that width also changes depending on what rim it's mounted to. got a flexy frame or wheel? expect the tire to wobble on a sprint or climb, requiring buffer space on either side so it doesn't rub the frame. some brakes can have higher or lower arches, again affected by rim width or just where they mounted the bridge. is it an older tire? might be wider than it used to be.

if you want a more empirical method, use spare wheels and just measure the gap between rim and frame. tire width is roughly gonna be the height of the tire too (not accounting for tread). it's a pretty rough measurement but it'll give an approximation at least, and when mounting tires it should never come down to the millimeter anyways. just don't forget to check down by the bottom bracket as that's as often a limiting factor as the brake bridge. also factor in whether you'll be using fenders. when in doubt, size down.

one other way i used to think about it was in terms of what age and type of bike it is. i could pretty much guarantee that a hybrid bike would be able to fit up to 38c. whereas i wouldn't push it any larger than 25c on an aero or road bike (unless i specifically knew it was designed with larger tires in mind). high-end cross bikes would get 33mm because that's the biggest you're allowed to use. 26" mountain bikes could almost always take up to 2" knobby tires... there were exceptions, sure, but this worked more than it didn't.

Not the answer you're looking for? Browse other questions tagged tire canonical-answer or ask your own question.

3
What is the actual width of a Panaracer Pasela tire?
1
Minimum width tire?
3
inner tube width range relative to tire width: reliability effects?
4
Minimum tire width to avoid snake bite
0
Giant Revel 29er 2015 - maximum width of tire I can fit?
3
optimal trail/monster-cross tyre width solution for 19mm rims on rigid bike
18
How can I tell what year my bike was made?
4
Narrow tubeless tire on wide rim
29
Why shouldn't I care what model/make/year my bicycle is?