Hi everyone just a silly question.

I have built a tall bike which is a wee project at the moment. I live in a hilly area in Scotland and having gone down a hill at 25 mpg (40 km/h) on the beast. I feel the front wheel is quite close to the center of the bike.

I did extend the wheel base by a foot (300 mm). Now I would like to build another one with a longer wheel base so the front wheel is further away from me.

The question is, if I change the fork angle slightly so I don't feel I'm going over the handle bars to an early bath, how will it affect the handling? The handle bars are around 6 feet (182cm) in height.

Unless you extend the front forks a metre or more you can't fix the problem you have by doing that. A typical bike has a wheelbase just over a metre, but when you lift the centre of gravity by a metre you will need to extend the wheelbase by a metre. Most tall bikes can only be ridden on flat ground because of this (and their emergency stop is the penny-farthing one .. face to ground from a great height).

These guys rode around Britain on tall bikes, and if you look at the pictures their bikes are tandem-length: http://www.tallbiketourbritain.com/page3.htm 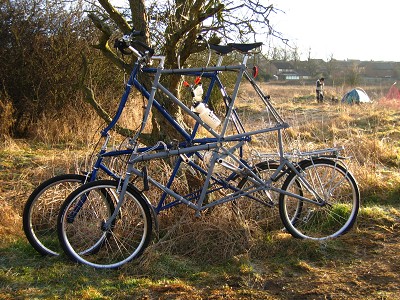 ZengaBros have built a whole bunch of different tall bikes and most of theirs are also very long compared to a short bike.

There are online bike geometry tools but none of the ones I could find work for tall bikes.

Not an ideal answer, but I have tried something similar. I am a tall rider at 195 cm, but a large proportion of my length is in my legs. So my saddle is high and my reach is only average.

On steep climbs on my road bike I have issues keeping the front wheel on the ground, because:

Upshot of all that is the rider's saddle weight is over, and then is behind the rear axle, which subtracts from the front wheel's weight, causing lifty wheel, poor steering and balance, and in extreme cases back flips.

So I obtained this former e-bike and made it more roady. It had roughly 125mm longer chainstays to store the battery pack. With the seat forward, it should have been balanced at a 72% gradient. I rode it up a 35% road and the front lifty was completely gone. Downside, a 20 kilo steel bike was no fun at all going up a hill.

This bike would not wheelie. I could barely get the front wheel off the deck by moving backward and mashing a pedal.

It steered straight and true and was awesome when riding a long straight road.

Turning was okay, but it was more bargelike than reactive. Because the rear wheel was so far behind, it took a longer wide turn to get around a corner, and the back wheel followed a much different track.

The low BB meant for easy pedal strike too, so I learned to keep cranks level. 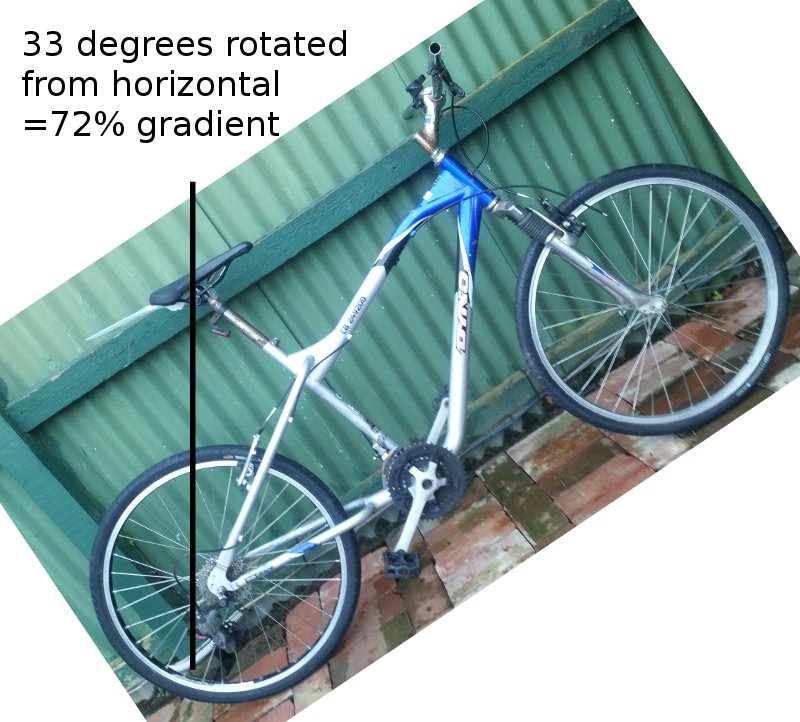 For your purposes, you're interested in the front not the back end. So you want to keep the angle between your saddle and each axle the same. That will preserve the bike's handing as much as possible.

However, increasing the height will make fast stops hairier simply because you're taller. My impression is tall bikes are for show, not practical daily usage and certainly not for racing around fast.

I remember a good answer on this site about modern MTB geometry, where the headset looks way too far forward, but can't find it. For your needs, I suspect a very short stem combined with extending the top and down tubes will be about all you can do.

Trying to change the angle of the forks by extreme amounts will be fairly fruitless.

Idea: How about indirect steering? Imagine sitting in the rear seat of a tandem and steering from the back? There are some great images of an old rear-steer tandem which may give you enough ideas for your own build. It'll still steer like a boat, but it should track okay and self-center like a normal bike.

Not the answer you're looking for? Browse other questions tagged geometry framebuilding tall-bike or ask your own question.

4
How old is this rear steer skip tooth tandem?

7
MIG Welds vs Brazing for simple bike hacks
12
Feasibility of bike frame design by a layperson
1
Evaluating hybrid bike geometries
3
Should I prioritise reach over stack (in choosing a new bike)?
5
Is it possible to rebuild a a steel bike frame (to make it lighter) by welding aluminum tubes
3
In bike geometry, what is 'RC Length'?
0
How to adjust when i am 5'5 foot tall and having a 42 cm roadbike frame?
2
Bike fit - comparison of similar geometries