How to read the traffic light at this German intersection?

There is an intersection in my city in Germany where the lights and signs puzzle me. 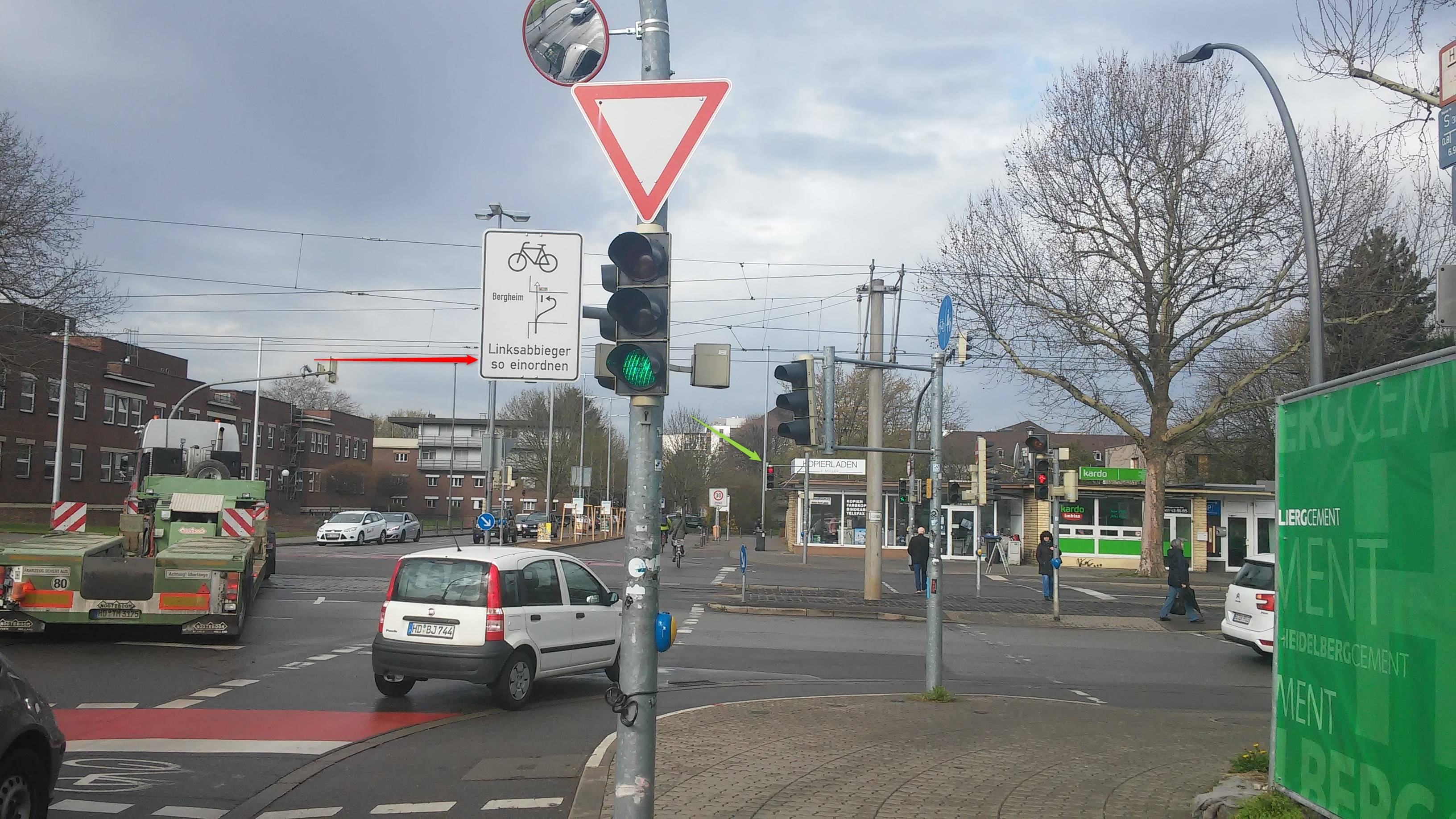 I usually want to turn left there. What I suppose should be relevant for me is the sign marked with the red arrow (the text reads: Those turning left should position themselves like that) and the traffic light marked with the green arrow. It is impossible to see at my phone camera's resolution, but from up close, it shows a bicycle and an arrow to the left, like this one: 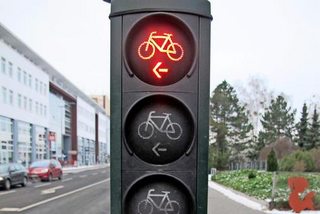 At first I thought that I am supposed to start ahead when that light turns green, cross the street in front of the viewpoint (FS), then turn as shown on the sign and wait there until I can cross the street to the left of the viewpoint (LS). But the light only turns green for a very short time, maybe 10 to 15 seconds. And during this time, the signal is green for cars coming from the left on the FS, so it is impossible to cross.

Then I thought that I maybe should cross first while the cars' traffic light on the LS is green, then position myself as shown on the sign. But as soon as I have crossed, the angle is all wrong and it is impossible to see the bicycle traffic light any more. If I am directly in front of it, I have to angle my neck up to see it, and that way cannot see much of the rest of the situation on the crossing. If I turn left and go a little bit back, as shown on the sign, the viewing angle is so shallow that I can see the surface of all three colors from the side, and all seem equally lighted, so it is impossible to tell which one is on.

So I now completely disregard that light, cross with the cars' light the FS, then turn left and use the pedestrian's light to cross the LS.

What is the actual meaning of the traffic light, and how is it supposed to be read?

You're meant to cross the crossing in two steps (you'll need two traffic light cycles to turn left, not like cars who manage in one cycle).

I took the road names from here, which is, I think, the crossing you were photographing. 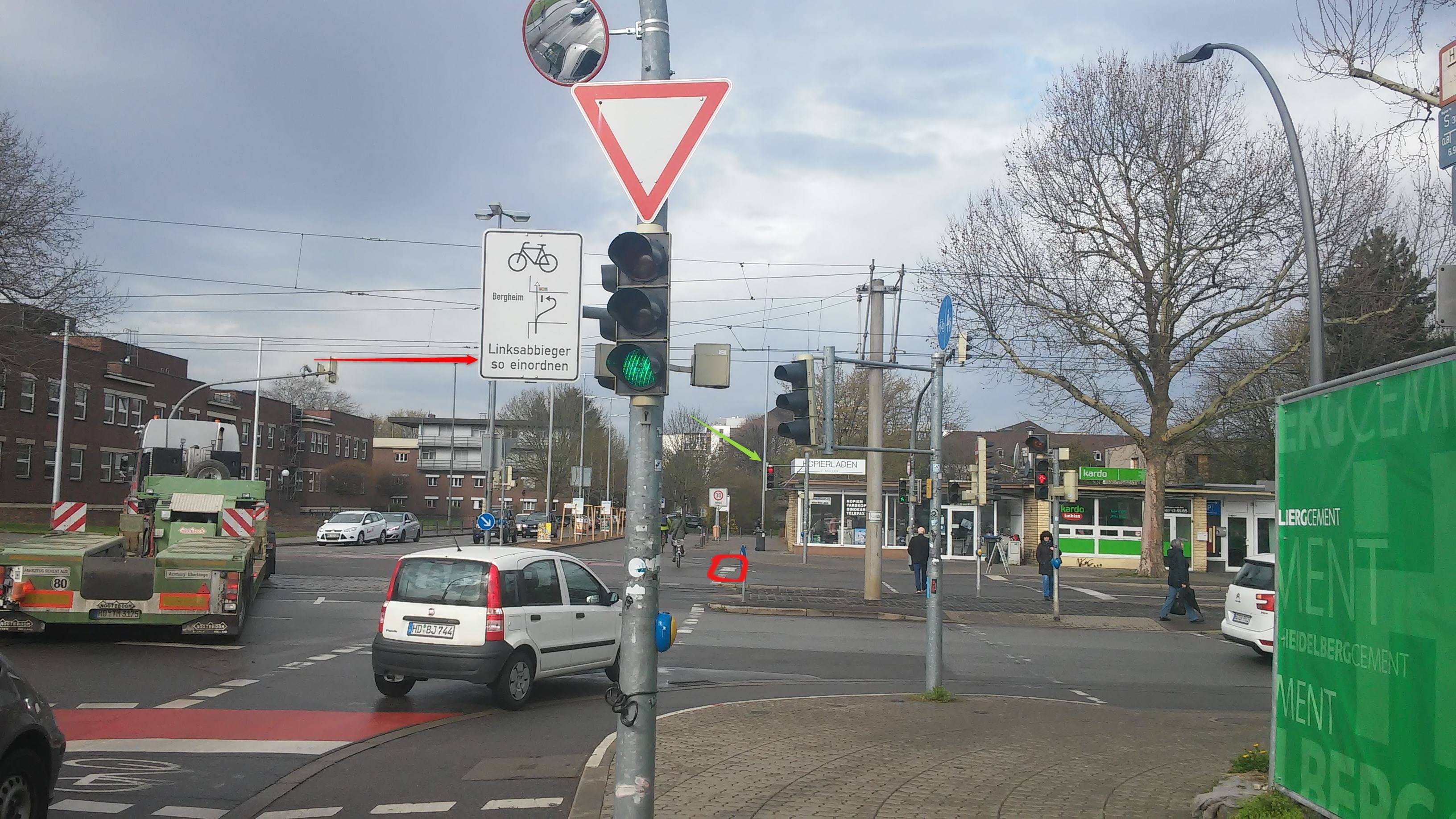 . (And see all the cars with the same destination as you, cruise off over the river while you wait). Now you're standing in front of the cars going along Berliner Straße facing south.

For the second step, the small traffic light you highlighted is relevant (and the way these crossings are meant to be used, from this position it should be visible, but they are commonly misadjusted, don't know why, but it seems they see less maintenance). It's purpose is to give you a small head start ahead of the traffic queueing up behind you in Berliner Straße. This is why it's so short green, it's only for the few people getting packed in this short term "parking spot", it is not meant to be caught by flowing traffic. In addition to the headstart, it's meant to tell you when Berliner Straße has green - there's no way you can see the main signal. 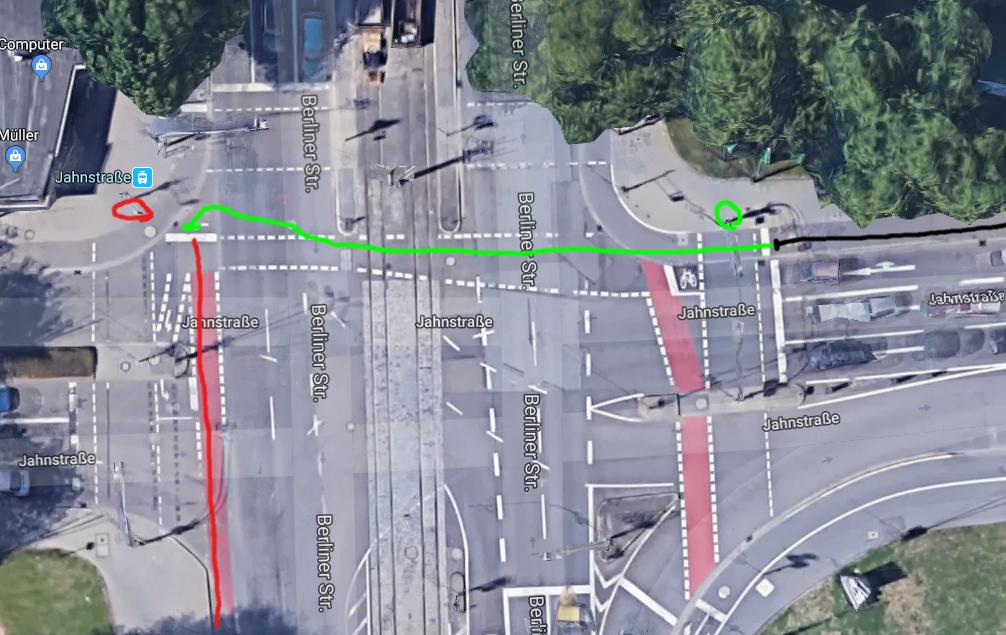 EDIT: for the benefit of those who want to take another look at the concept: similar bike-left-turn solutions exist in other towns, here in geneva, with streetview

with two of these small wait-spaces to wait for green on the next leg:

EDIT (adding some points raised in the comments):

This way of turning left is typically a safe and easy way to turn left on crowded crossings, even if you're not very familiar with roads. The biggest danger is cars turning right and running over you when you go straight on the first leg - that's the same as when you go straight and unfortunately omnipresent in Germany, not only on crossings like these. If you're confident to do it, you can probably also turn left on the car lane - it might be a bit of a hazzle to reach that lane, I'm not sure how legally evil that is, but it's probably not too problematic if you know the crossing. I cannot judge how much of an obstacle you'll become for cars turning left - I think it's two lanes turning left in parallel.

In my experience you're meant to do the 90° turn before coming to a stop in Germany, and after the stop in Switzerland; such that in your case you just accelerate straight once the second traffic light turns green, that's the position for which the traffic light should be adjust.

PS: on the top view you can also see similar waiting places for coming from the south on Berliner Straße and turning left into Im Neuenheimer Feld; and with lane marking, the way to go from the north into Jahnstraße to the east.

Your first interpretation seems correct: you get special bike only green which allows you to position yourself at the front of traffic coming from the right on the cross street, effectively making a two stage left turn whilst staying on the right of other traffic.

However, you say that when the bike only light is green, traffic coming from the left on the cross street also has a green, so that obviously does not work.

It's not inconceivable that the light timing is set up incorrectly. You should contact whichever local authority deals with traffic lights and ask them investigate if the lights are functioning correctly - the situation you describe sounds like it could get a cyclist killed very easily.

You can also ask them to clarify how the junction works, and perhaps request extra signage.

If you want to go left you'll have to position yourself at the right edge of the road. When you get a green (cycle only) light you'll cross the street that come from the right at the pedestrian crossing and you'll wait at the red traffic lights on that street. When they switch to green you go straight ahead.

In fact it's a two steps left turn with the advantage that you don't cross the path of in-coming cars. The downside is that you'll have to wait twice at red lights on that crossing.

The additional white panel tells you what to do: Wait at the traffic lights for the cars coming form the right. A red cycle lane that you see in the picture lies ahead of you.

Not the answer you're looking for? Browse other questions tagged traffic germany or ask your own question.

26
Which states or countries have stop-sign-as-yield laws for bicyclists (Idaho stop law)?
21
Passing cars on the right, and later merging into their lane
11
How do Traffic Lights Notice Bicyclists?
31
Intersection detection doesn't notice me, what should I do?
3
What does a flashing yellow arrow traffic signal mean?
2
How to avoid riding on a gravel on the road sides? + Riding through traffic lights
24
Discouraging motorists from stopping at an intersection when they have the right-of-way
6
If a lane is going to expand should the left lane be taken prior to the expansion?
8
Which traffic light do I have to follow?
7
How to cross major road 3 way intersection