I am developing a small tool that allows to pick a day for a long cycle trip. The idea is to use weather forecasts to compute how bad/good the wind along the route in the following days is. You can have a look and read further details in the project page.

One of the requirements for the model accuracy are good estimates of the real physical parameters used in the model. This parameters are personal and depend on the rider/cycle. Therefore, the program should have a feature to estimate those parameters, provided some powermeter data. Unfortunately, I don't have a powermeter, so I cannot collect the data myself and play around with the way those parameters are estimated.

Therefore, I am reaching out for people who have a powermeter and willing to help me to get this data examples. The data I need should ideally contain the following entries: timestamp, latitude, longitude, elevation, power. The entries are needed to be collected along a cycle trip (or several).

You do not need a power file (although I am happy to provide some examples), what you do need to do your calculations are the power curves and total weight so you can calculate watts/kg. 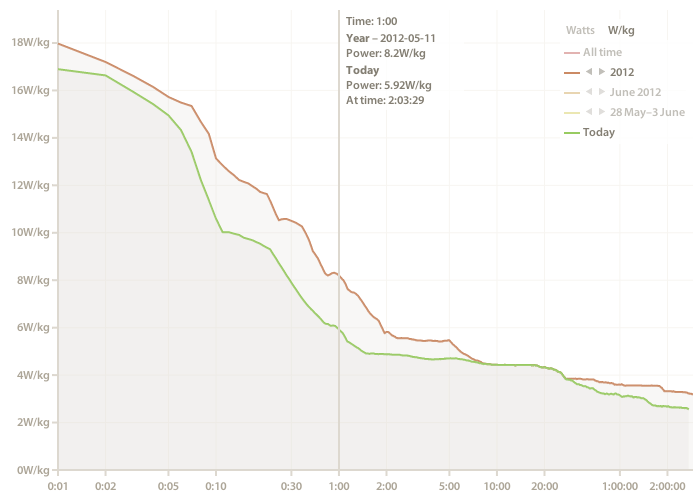 The ability of humans produce sustainable power changes over the duration. The highest power is produced for short intervals, with a rapid drop off from 1 sec to 1 min interval, followed by a leveling out over time.

Most online training analyzers will provide this. Strava actually provides these figures to members, and allows you to access power curves of riders you follow that upload power data. You can also download files of athletes you follow (i.e., those who allow you to follow them).

Therefore you will need to:

To get you started below are a couple power curve examples, one from a commute and another from an actual pro athlete (which would probably not be very indicative of touring efforts).

Here is an example an out-of-shape middle age man in lycra (MAMIL) riding to work: 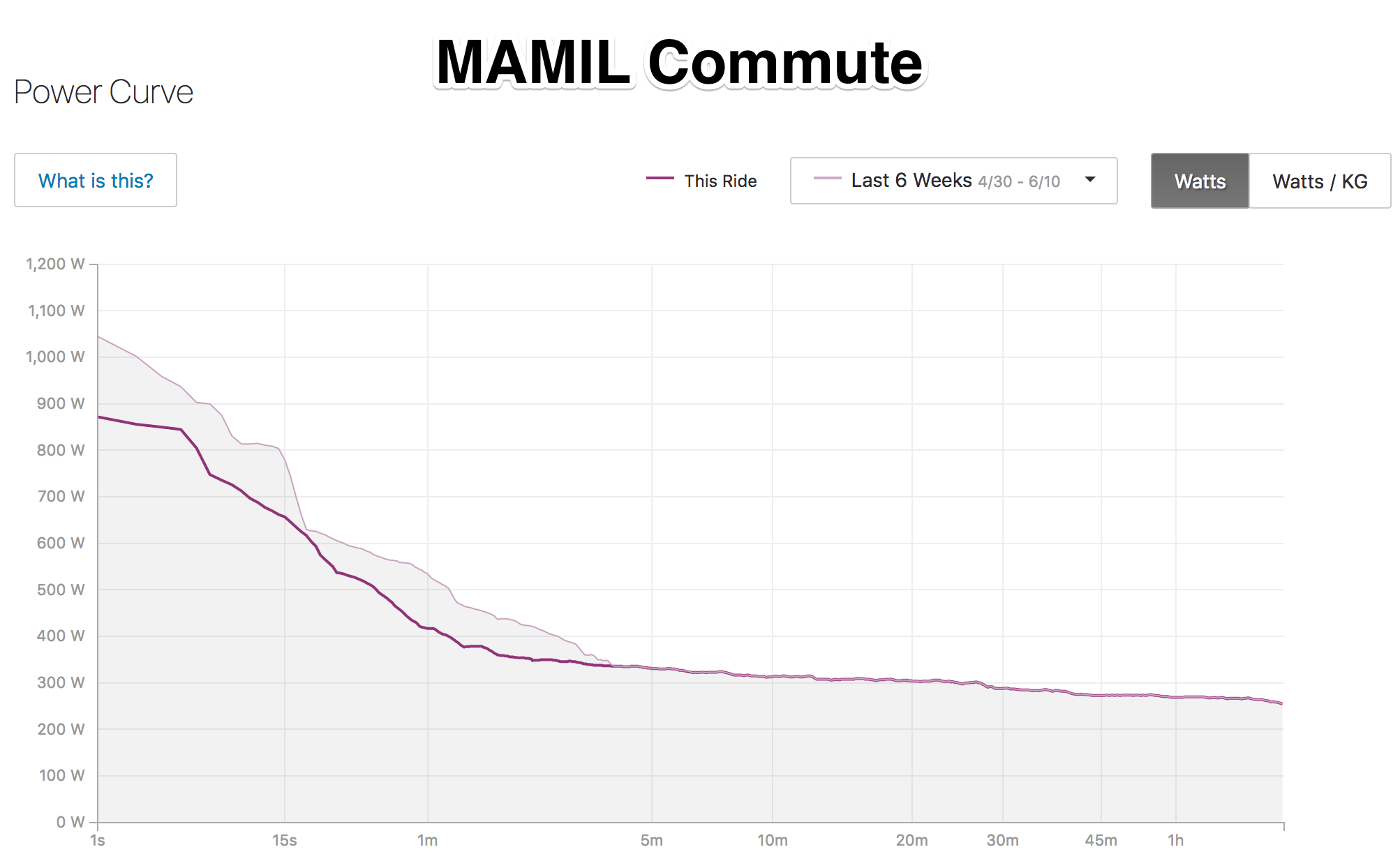 This was last week, riding a tempo pace but not killing it. I was putting a reasonable effort on the climbs which is why the 20 minute power is around 300 watts, but didn't want to work too hard so the 1 hour power falls off and the short duration power is relatively low.

This is a high end example of a pro athlete (triathlete) riding full out for an hour in a cyclo-cross (CX) race, a type of racing known for its intensity: 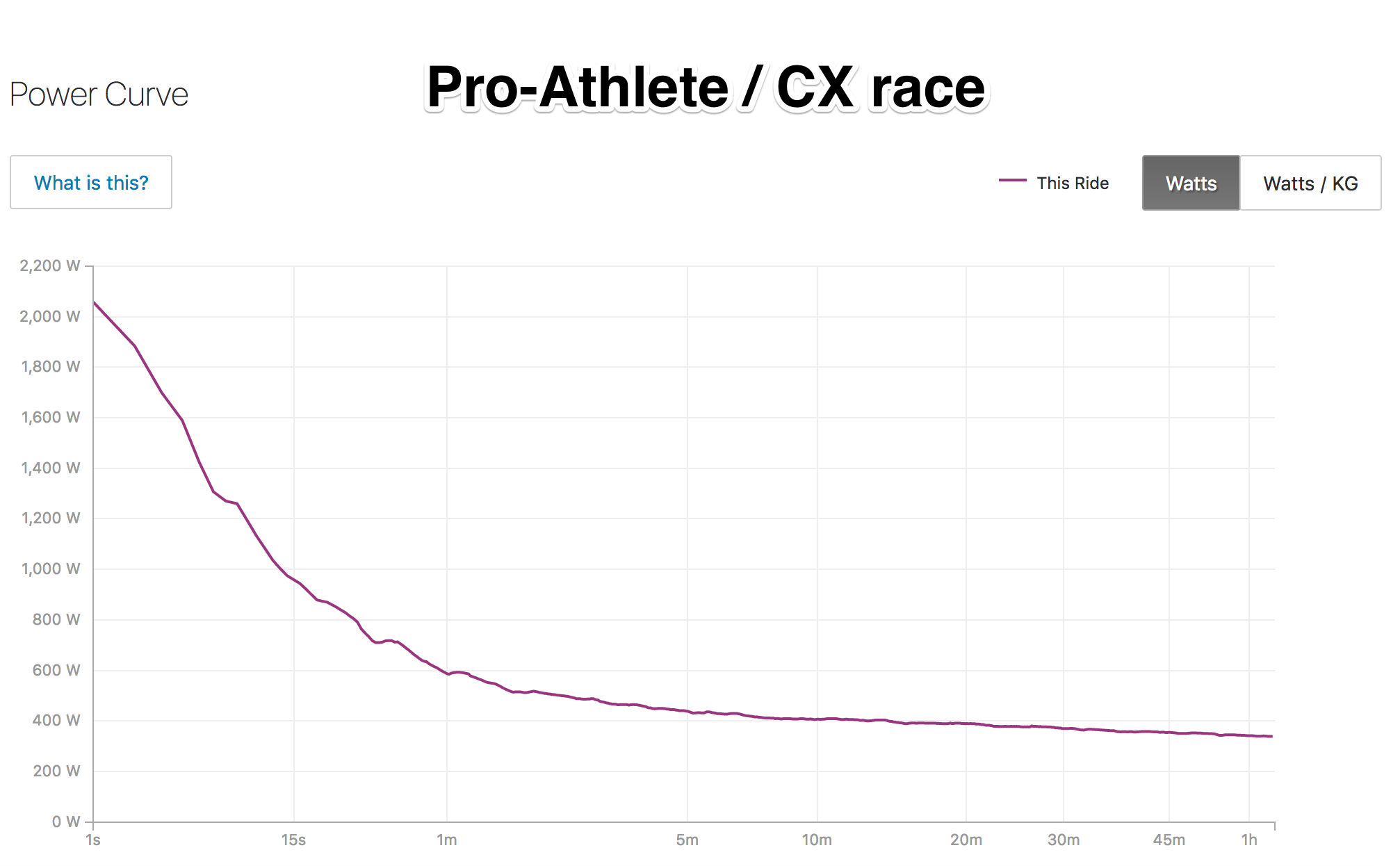 They are putting in big efforts out of the corners (2000 watts!!!! - #$%!) and are maxed out everywhere else. Here the CP60 (critical power - 60 minutes; also known as Functional Power Threshold [FTP]) is around 370 watts!!! Impressive fitness to say the least.

If you look at 5 minute power, which is a good indicator of potential fitness, the pro athlete is still putting out almost 100 watts more power than the MAMIL commuter example. That is 30% more capability! Granted I wasn't completely maxed out on my commute, but there is no way I could find another 100 watts to match, plus I have more weight which would put me at a lower watts/kg and a further disadvantage.

Both examples are probably outside what someone on a long cycle trip will want to do. I would simply shift the curves down appropriately.

Not the answer you're looking for? Browse other questions tagged bike-computer power or ask your own question.

30
Are there any bicycle computers that will log ride data?
7
Analysis of Stages high-speed data
8
What use does a Heart Rate Monitor have if you have a Powermeter?
1
Is this summary for seeking an understanding of the landscape of cyclocomputers in 2020 accurate?
3
Is there a left-sided powermeter that requires less than 8 millimeters of clearance?
1
What additional material do i need for the installation of my powermeter?
0
How does Strava treat power data while resting?