This problem has consumed a lot of time and resources and has yet to be solved.

This is a basic Giant Iguana mtb, with a Deore rear derailleur, SRAM 950 9-sp cassette, Truvativ chainrings, Shimano HG53 chain. The bike ran smooth without issue before any work was done.

I initially figured it was time for a new chain and it was apparent when I installed it, that the cogs were worn because the chain wanted to skip, especially in the middle one where I do most of my riding. So I set the bike to the side, ordered new Truvativ chainrings (middle and outer), new SRAM 970 cassette, SRAM chain (just in case of differences with Shimano chain on SRAM derailleur - though I've never had an issue with that), also new cones and ball bearings (inner races are like new). Later I would add a new bottom bracket at the sketchy advice of one of three of my LBS (all three LBS's are baffled too). Basically all the parts are the same I've always used and were the original type and brand that came on the bike new (except I used the SRAM 950 in the past, now the 970 cassette).

Also inspected and serviced the pedals, freehub and derailleur, checking the bearings and races for any damage and free-play in the hub. Bearings are shiny, no gouges in the races, minimal play in the freehub.

I get the everything back together, index the derailleur, shifts fine, no pre-shifting issue on the rear cogs and then. . . an odd thump/pop felt in the crank on cog number six. It could be happening on the adjacent cogs too, but if so, it’s not noticeable. I then notice that under even slight load (bike is on a bike stand) when the chain is leaving the cog (top side) it pops out of the cog (like binding), and always in the same place (near the cog tooth number identification imprint). 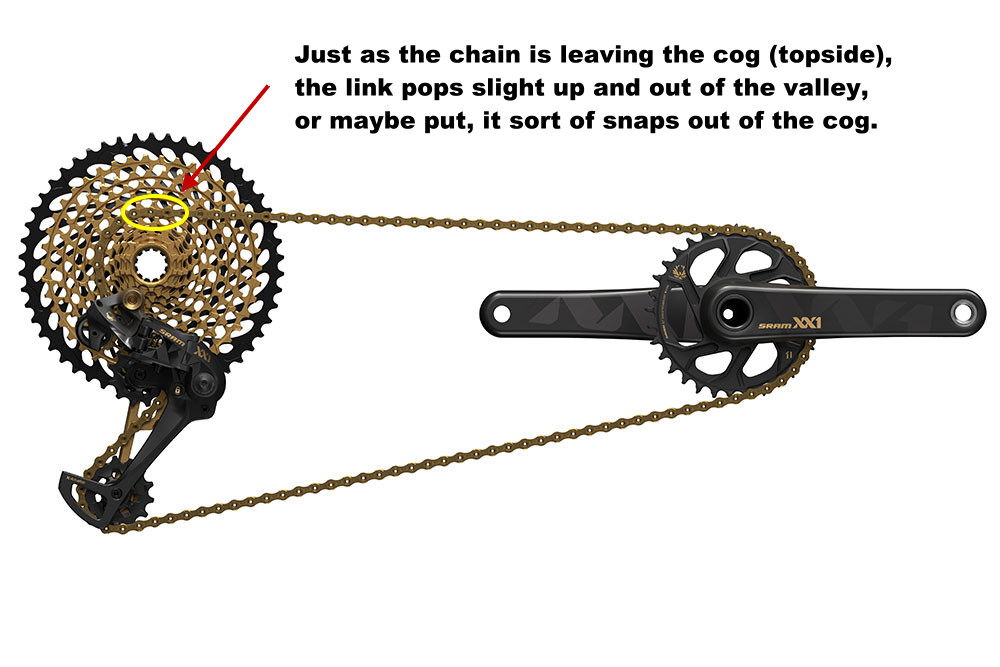 So more taking things apart, taking the bike to two different LBS, no help. Finally decided to see if SRAM would warranty the cassette. It has to be done by an LBS and the place where I bought the bike agreed. Same SRAM 970 (9 speed) cassette arrives, LBS installs it and runs through the gears on the stand, everything shifts fine. . . and. . . it’s worse. Now the pop is in more gears. The LBS had already said if this one doesn't work, then it’s inherent to the cassette model. So I didn’t bother to balk.

I have rebuilt, degreased, re-greased, serviced, aligned, replaced, inspected, virtually every part I can think of on the drivetrain, even used dial calipers to measure cog width, teeth thickness etc.. Any thoughts, even way outside the box would be greatly appreciated. Hate to just drop the bike off at the river where one of the homeless would love to take it off my hands.

Sorry for the length, figured it would save time to provide as much as possible.

If I understand the description of the issue properly: the chain hangs on the cassette sprockets slightly at the approx. 12 o'clock position where it should be peeling off to go to the chainrings, then 'pops' as it lets go.

In other words, you have slight chainsuck on some teeth of some cassette sprockets.

If there is a slight manufacturing defects or burrs on some cassette sprocket teeth that is catching the chain, those are probably going to wear off pretty quickly. I'd try to put a few miles on the bike and see if the problem resolves itself.

Something else you should probably check for are stiff joints between links in the chain. Again, some running-in wear on the drivetrain may resolve chain problems.

Not the answer you're looking for? Browse other questions tagged chain gears drivetrain or ask your own question.