Straigtening a rim with 7mm deviation in a single section

In a recent crash my front rim experienced significant sideways force. There was no burring on the lip of the rim, but the section was (eye-measured but perfectly drawn) (y is left-right deviation): 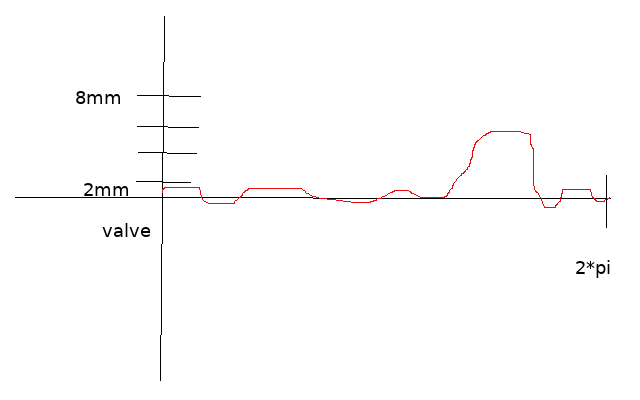 Firstly, I was surprised that the wheel isn't showing a similar kink on the other side of the circle.

Then I tried to straighten the bent section. First I readjusted all the spokes under the dent, plus a couple more on the edges. This reduced the kink a little. Then I went around the rim, "fixing" left-right adjustment, ovality and dish, while being careful for over- and undertightening spokes.

It didn't work. The spokes directly under the kink needed to be force overtightened and this still about halved the problem.

Next I loosened all the spokes and re-adjusted them. The end of the process was marked by the rapture of the nipple in the centre of the kink. The wheel was twice as true as before (measured by looking and handwaving) (so deviations are now 1/4 of those in the picture).

I have no intention of replacing the broken nipple. The hub sounds like an old alcoholic coughing. But for the next time: What is a good procedure for straightening a rim as shown in the picture?

You're describing the symptoms of a rim that's sustained an impact sufficient to warp the rim itself. In other words, if you took away the spokes and hub and layed the bare rim on a flat surface, with no spoke tension acting upon it, it wouldn't be very flat. But in a case like this there's nothing that happened to it that would also cause the spot on the other side to warp out evenly, like a parabola or potato chip or whatever. It's just tweaked.

When such damage is minor enough, it's possible to mitigate it reasonably well by truing it out. In this case, the truing process involves adjusting the spoke tensions to be unequal in a way that forces the rim to be straight. The limiting factor is if you push the spoke tensions too low on one side to achieve this, you have a wheel with a weak spot that may also have trouble staying true, and if you push the tension on the other side too high then those spokes will be extra prone to causing fatigue cracking on the rim. In contrast, a rim that's perfectly straight, round, and undamaged is made true by getting the spoke tensions as equal on each side as possible (although in reality there is some small discrepancy due to the seam, imperfections, etc).

The only way of fixing it is to bend out the warped spot. This used to be common in the earlier history of bikes, but is now a lost art in many parts of the world. Rims were also more often steel then, which lends itself better to actually getting fixed in this manner. There are various techniques for doing it and I am not an authority. Some people's technique involves first detensioning the rim to be able to judge things more accurately, but I've known old time mechanics with a lifetime of experience that believed in skipping that step, sometimes with the reasoning that the now-overtightened spokes on one side of the tweaked wheel will help the process go smoother, having the tendency to exert pulling force on the rim just where it's needed in just the right amount. The main apparatus I've seen for it is a pair of 2x4s between the ground and the workbench with a rim-sized gap between them. You insert up to the approximate line of the bend and bend it back.

Many nicer modern aluminum rims are made of fancier, higher strength, less ductile material with thinner walls than in the past. It's important to understand that trying to bend around such rims is an entirely different proposition from what used to be commonplace. You would find it takes way more force (and likely took more to bend it to begin with), and cracking it either in the process or after a little riding would be a much bigger issue.

Not the answer you're looking for? Browse other questions tagged repair rims or ask your own question.