How to change the seat clamp on a dropper post?

I now have a replacement seat clamp, but was wondering what the easiest way to replace the defective one was. The complexity is that the bike has a dropper seat post, which means that I'll have to pull the seat post out of the seat tube and then try to remove/reinstall the new clamp over the seat post cable. On my wife's bike, the cabling is routed internally in the frame.

Since the seat post remote's cable is already frayed out a bit at the end at the remote's end, I want to avoid removing the cable from the remote - I'm afraid that it will be difficult to get it back into the remote...

Is there an easy way to replace the seat clamp in this scenario? My current preferred way would be to unscrew the remote from the handle bar to give the cable enough slack for pulling the seat post out of the seat tube. Am I on the right track, or is there a better way? 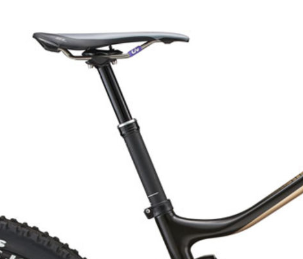 As you already noted you have to unscrew the remote from the handlebar and push the hose/cable into the frame so you can pull on the dropper post. Afterwards you just remove the screws from the seat clamp and pull it over the cable. Install everything backwards and you are good to go again.

3
How easy is it to remove a seat with a dropper post?

23
How do I keep my seat from tilting back?
7
Does anyone make a split seat clamp?
2
Seat clamp tolerance
3
How easy is it to remove a seat with a dropper post?
0
Brake hanger causing seatpost slippage?
5
Seat rail clamp spins in the seat post
1
How to determine my bike's seat post clamp size?
5
Seat post clamp bracket failure - how to repair?
1
Water bottle rivnuts preventing dropper post getting low enough, carbon frame
12
Is it safe to drill a cable exit hole in a seatpost?