I recently bought a used 2011 diamondback outlook mountain bike for $30 on craigslist.

The bike however needed some significant work. The bearings in both wheels need to be replaced, the shimano 7 speed freewheel was rusted to crap and best of all, the rear brakes were missing. I guess that's why it was $30. The previous owner also decided it would be a great idea to coat everything in some very heavy automotive grease. the only good thing about that was the chain was really dirty but just needed a good cleaning. Somehow that was intact...

Anyway here's what we are getting to. I was removing the right crankarm to replace it with different ones that weren't so beat up and the threads are now stripped. Not the threads inside the crankarm, the threads attached to the bottom bracket that allow the retaining nut to hold the crankarm into place. 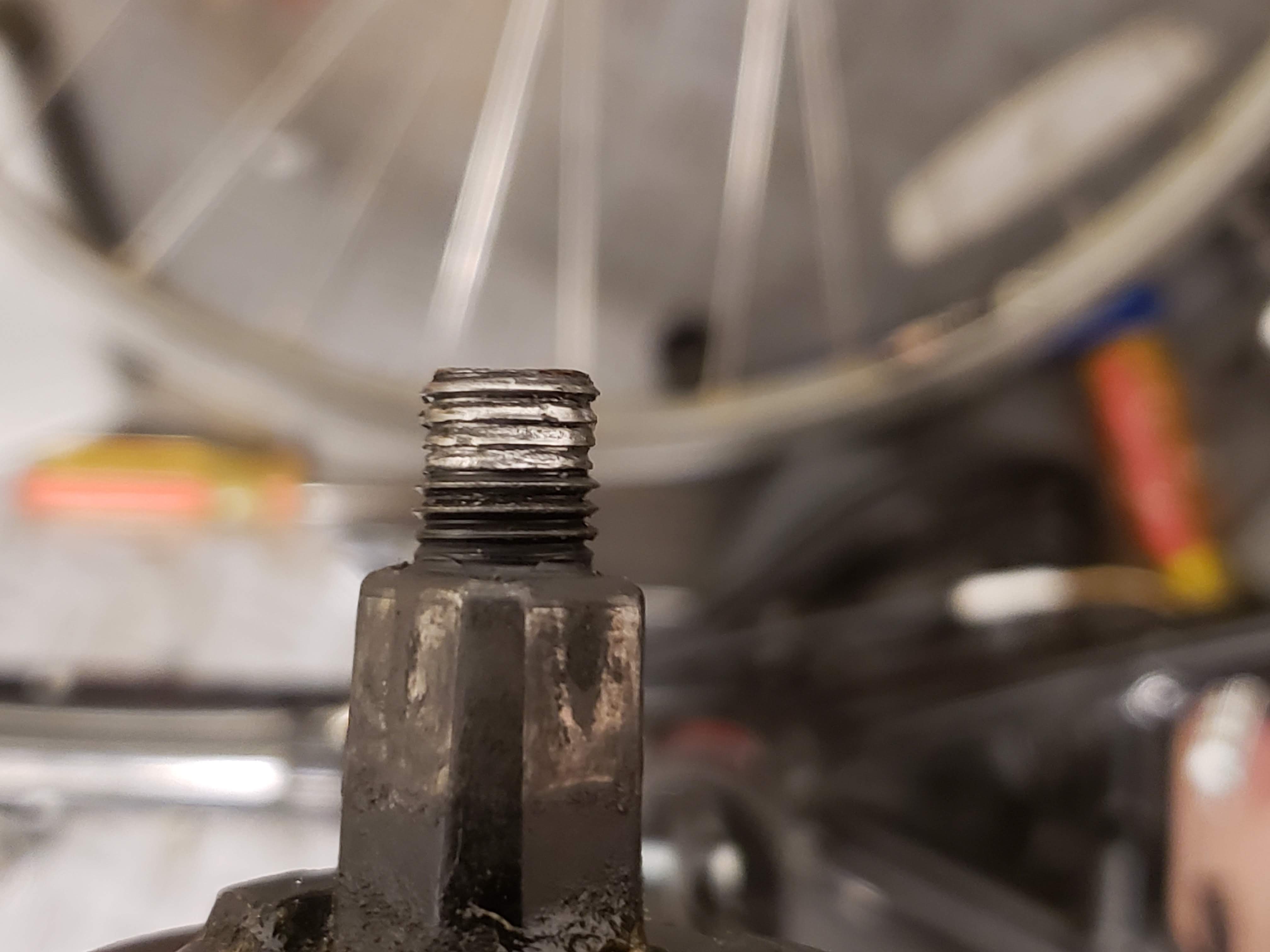 As you can see the threads have been almost ground down. The threads at the bottom closest to the square taper are what they are supposed to look like, and above that is what the threads look like now.

The nut also was stripped when I was removing it, so I ordered a replacement 14mm nut for this type of bottom bracket online since I can't find a nut like that in the fasteners section of my local hardware stores. But I can't easily do the same with the bottom bracket, so I need to fix it.

My first thought is to wrap some thread tape around the damaged threads. They still seem to be "sort of" there, just sanded down.

My second thought is to use a ton of threadlocker red on both the nut and the bolt, then tighten it in. This should hopefully create a good enough seal and the new nut won't move.

Third option is to buy a thread tap and try to carve new threads into the bolt. The only problem is I would need some sort of hollow thread tap that would fit over the bolt, and I don't think that even exists. I also don't know the appropriate thread pitch tap to buy in the first place.

Finally, is it possible to remove the threaded portion of the bottom bracket entirely by unscrewing it and just install a new threaded rod? Can that even be done?

The thread repair tool that is used in this sort of situation is called a die. The common size for crank nuts is M8x1.25.

However, too much material appears to be lost here for that approach to be reasonable. Crank nuts/bolts are one of the higher torque items on a bike, meaning you don't really have much leeway for severely damaged threads. Also, hardened steel threaded parts like this don't take as well to thread reformation as softer steel parts. Taps and dies have some capacity to shove material on damaged threads back into place, but here it's likely to break off instead.

You don't indicate whether you have a cartridge or cup and cone BB, but nutted BB spindles are almost always (maybe literally always?) found on cup and cone BBs. If so there's nothing stopping you from just replacing the spindle; basic cup and cone BBs generally let you do that freely since they tend to all use JIS spindles. You need the same length and, if applicable, offset. Pull the existing one and hopefully you'll find a code on it like the one in the picture. Match the new one with that. Shops don't tend to just have them anymore, since the common approach is now to just replace everything with cartridge, but they are still able to be ordered, and are cheap. 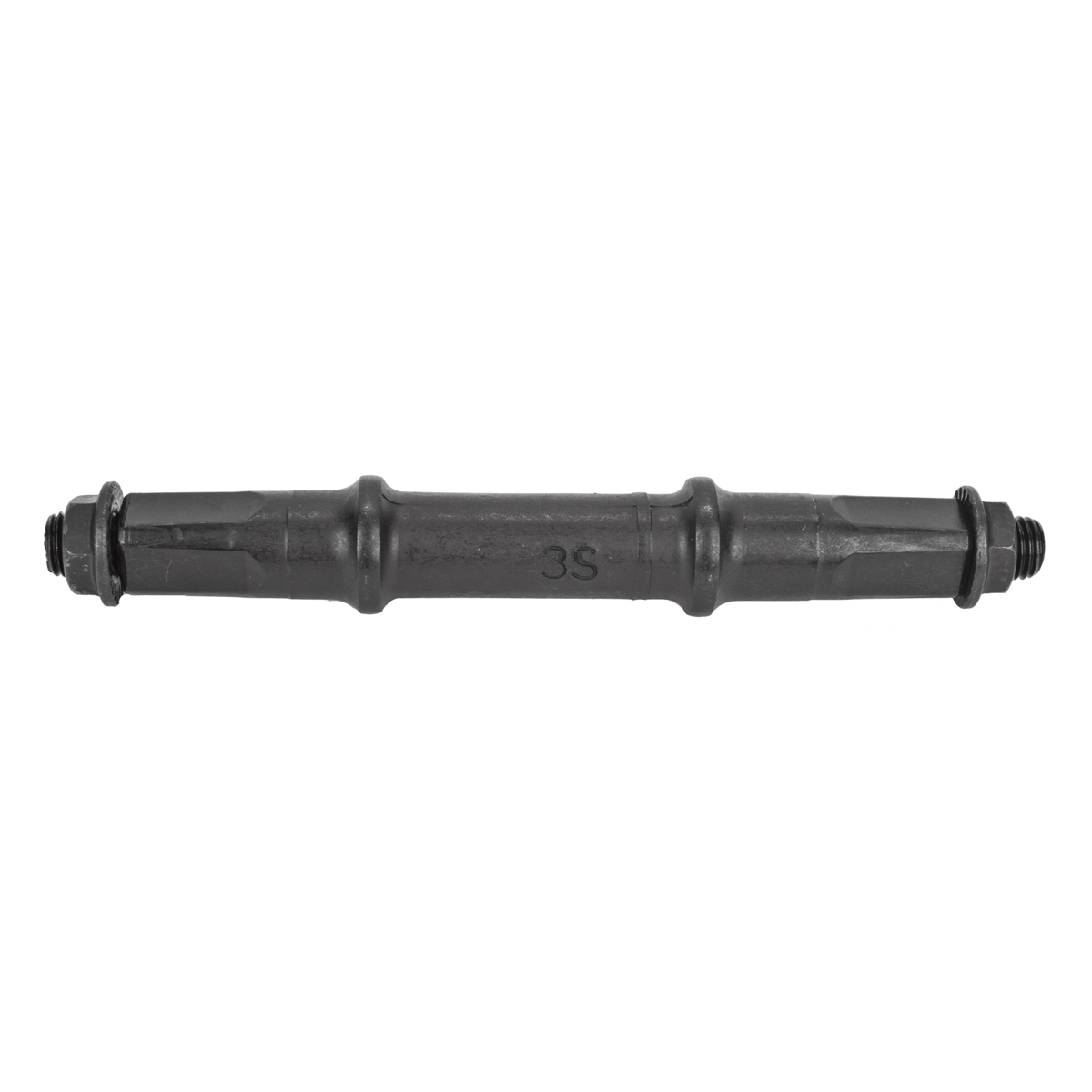 You can carefully clean the threads up with a very fine half-round or triangle file until the nut goes on OK (remove the minimum of metal). There are also specialised Thread files, they are not uncommon. Reassemble with lots of grease on the square tapers, so they seat properly.

Given the other bearings are shot, these probably need replacing or at least regreasing if you can get them apart (ie not cartridge type).

If you are going to fix your bikes, you might have to invest in tools You can get them all cheaply off Aliexpress - if you order them well before your bike breaks.

These are the special tools you pretty much have to have to work on a bike.

Okay, so I managed to fix the problem. However the way I fixed it I will likely need to purchase a new axle and bearings when it comes time to overhaul the crankarms again.

It turns out the threads were some very unusual M10 by somewhere between 1.75-2.00 thread pitch, and an M8 screw didn't seem to fit on at all.

I bought a cheap tap and die set from harbor freight and used an M10x1.25 die to carve new threads into the bottom bracket axle.

After this I took the original nut, and used a tap to carve M10x1.25 threads into the nut. It was VERY hard to turn at first likely due to the t handle in the kit being cheap and the threads being just a bit larger in the nut. I did manage to give the new nut 1.25 pitch threads however.

I took a bottle of threadlocker red and covered the axle threads in it, then installed the bolt. The bolt was very loose at first, but once I tightened it down, it didn't move at all.

If I ever need to remove the crankset again, I will purchase new parts and completely overhaul the bottom bracket. This was really a one-way repair, and trying to remove and reinstall the crankset again will likely destroy the threads far too much to be reused.

I ordered a ton of bike specific parts from aliexpress, so I at least have some crappy basic tools now like a chain whip, pinch spanner, and a sealed cartridge bottom bracket removal tool. I already have tools like a metric socket wrench set, adjustable wrenches, pliers, and allen keys because my grandfather used to work on cars, and our family inherited most of his tools that I still use today.

Problem fixed, but not really solved.

Not the answer you're looking for? Browse other questions tagged shimano diamondback or ask your own question.