I recently bought a gently used, not super well maintained Columbia 3-speed bike from some time in the 80s. It has an internal hub - the dreaded Shimano 333. My eventual plan is probably to convert it to single-speed, but I'm not quite ready to buy new wheels yet. (Yes, there are probably other ways to do it, but that's out of scope here anyway.) In the meantime, I'd like to put the internal hub in 2nd gear ("neutral") and leave it there permanently.

It should have been an easy operation - just shift into 2nd and then stop shifting! But I was out riding last weekend and I suddenly found I was trapped in 3rd gear. Couldn't shift down for love nor money. When I got home, I found this: 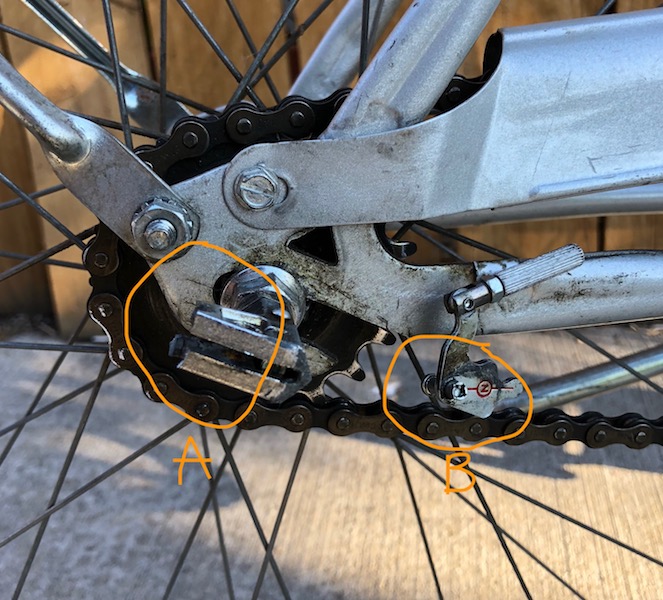 I've never dealt with an internal hub before so please bear with me for not knowing the vocabulary. I gather that the back of bit A is supposed to be a kind of bracket that holds the pin in bit B in place, creating a hinge that lets the cable tension do its work. It's a bit tough to see in the photo, but the back of bit A crumbled off in my hand when I went to put it back together. So I can put the shifting mechanism back together, but it doesn't stay together under tension.

No problem: I wanted to remove the shifter and cable eventually anyway. All would be well if I were trapped in 2nd gear. But I'm trapped in 3rd. I'm not completely sure what the ratio is but it's much too high a gear for single-speed use. So, thanks to this guide I've started to work out how this hub works. I've gotten as far as removing the bell crank and have found the push rod, which slides easily in and out, with the expected resistance at the "in" position. What I haven't yet figured out yet, though, is:

In the 45 minutes since I posted this question, I have developed an elegant workaround using a simple device: 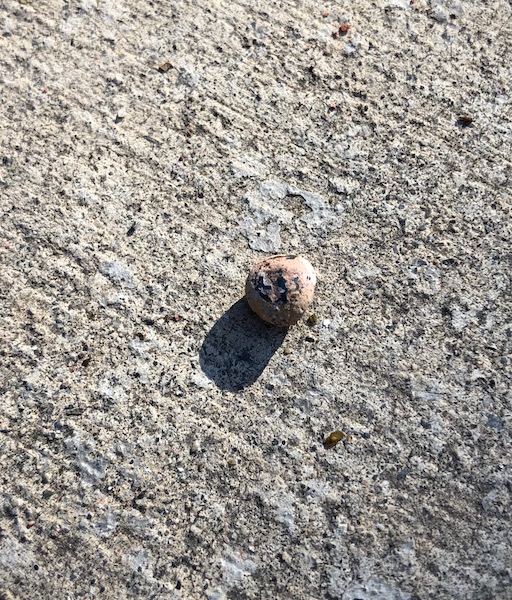 I stuck a pebble in the bellcrank.

Most folks here probably won't be surprised by this solution, but I'll elaborate on how I came to it for the sake of future searchers who might be internal hub noobs like me.

In fiddling with the push rod, I determined that since I have three gears, it probably has three positions: all the way in, all the way out, and... somewhere in between. I took a wild guess that second gear would be the "somewhere in between" gear. I figured that "all the way out" was third gear, since that's the natural position the rod is in when there's nothing in place to push it anywhere else, and 3rd is the gear I was stuck in.

I fiddled with the bellcrank some more - putting it back together, seeing what pieces would push on what if it were working properly - and determined that when the bike is in third gear, the head of the push rod butts right up against the inside of the part of the bellcrank that screws onto the threaded axle rod thingy. (Terminology is hard.) So: I need a way to push the rod into the halfway position while the bellcrank is screwed on in order to jam the system into second gear.

Enter the pebble. I found one in my yard that seemed to be the right size, dropped it into the bellcrank and put it back on the bike. Voila: the push rod is stuck in the "somewhere in the middle" position. I am effectively parked permanently in second gear. (Well, I can also shift into third gear if needed: I just have to stop, dismount, and unscrew the bellcrank a little. If I had a second pebble of equal size I could probably get myself into first gear, too!)

So, this is my workable, cheap (free!) solution. I will leave this question open for a while though because I am hoping someone has something a little less bush-league to suggest!

Not the answer you're looking for? Browse other questions tagged repair internally-geared-hub shifting or ask your own question.