I am in the market for a rear rack. I noticed that there are two categories of rear racks:

Seatpost-mounted rear racks, such as this one: 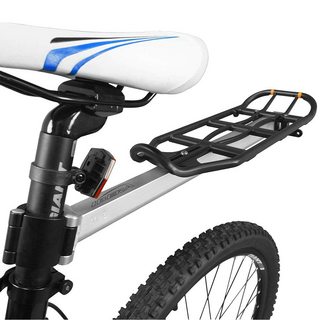 And frame-mounted rear racks, such as this one: 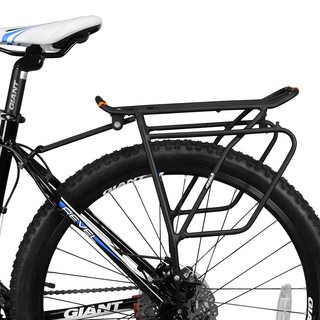 The advantages of seat mounted racks are that they don’t require rear dropout rack lugs; some of the seat mount racks have quick release levers so you can easily take them off (while racing or transporting the bike, etc), and are many times the only option for a rear suspension bike.

The disadvantages of seat mount racks are numerous:

Source: had a Specialized hardrock hardtail back in the day and had a regular rack on it. Switched over to a seat mounted rack at one point as I thought it looked cooler and it does, but quickly realized it was most just looks.

RoboKaren's answer is great on the pros and cons, so I'll restrict myself to explicitly answering

Really, the only reason is that your bike won't support a frame-mounted rack: for example because it has rear suspension. In engineering terms, a frame-mounted rack supports the weight of what you're carrying from below by being attached to the bike somewhere near the rear axle, and the connection near the saddle is mostly to keep the rack in the correct orientation. A seat-post-mounted rack supports the weight entirely by torsional forces through the seat-post, which isn't nearly as sturdy. That means the rack itself is probably heavier and probably can't support as much load. So you'd almost always want a frame-mounted rack if that's compatible with your bike.

Actually, there is one pro of seat-post-mounted racks that RoboKaren doesn't mention. If you're not carrying much weight, a seat-post rack with a small bag on top of it is more aerodynamic than carrying the same load in a pannier on the side of a frame-mount rack. (Actually, GCN's test was with a large saddle bag, rather than the exact situation I describe, but that's basically the same thing.)

Not the answer you're looking for? Browse other questions tagged seatpost accessories rack cargo or ask your own question.

2
Can anyone suggest a way to mount my rack to prevent it impeding the rear brake?
47
Toddler bike seat vs. bike trailer?
5
attaching seatpost acessories to rear of racks?
4
Are seatpost shims safe to use - for the frame, seatpost, and the rider?
5
Pannier rack for larger diameter seat post
3
The best way to mount a rear rack
5
Can I install a back bike rack without attachment to the rear part of the frame?
4
Giant rack adapters
7
Buying rear rack during pandemic crisis - go real bottom, up high, or wait?