Are road-bike suspension forks still manufactured, if so, where?

For a few years, road bike suspension forks were used at Paris-Roubaix, but now they seem to have disappeared. Are they still being manufactured? If not, why (aside from UCI regulation) did they not persist, e.g. for cyclocross or city riding? 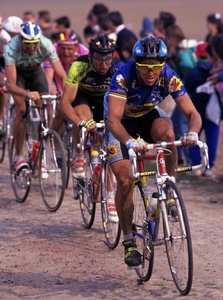 The Rockshox at Paris Roubaix were a Greg LeMond thing. Whatever Greg competed in a few 'out there' cycling innovations came along with him. Remember those tri-bars that gave him the aero tuck position to beat Laurent Fignon in the Tour de France? On that event he also had his own road bars that had an extra position, where the drop handlebar end plugs would be, his bars turned in 90 degrees to give an extra lower position. Anyway, it was his Team-Z that introduced the Rockshox on Roubaix. Seems that your well chosen pic duly notes his special handlebars, the Rockshox and 'Team Z'.

Greg's bars and forks were not widely adopted although his time-trial bars most certainly were. In any evolutionary process some mutations just don't work. As for the forks, the problems with them were that they were heavy, the brake touched the rim and they introduced 'sloppiness' in the front end. Imaginably these problems would be overcome but they were not. I don't think UCI regulations had anything to do with it, the product at that time was just not that good. MTB forks were a bit dubious too back then, only when the disk brake came along did the 'brake rub' problem get properly solved.

There are plenty of 700c forks on hybrid bikes from mainstream manufacturers, generally of the low-end 'Suntour' variety with a spring that does the work instead of any sophisticated oil/air arrangement.

You might want to go to a bike shop and do your own compare and contrast of the bikes with 700c suspension forks. The travel is around 50mm or so and there generally is no adjustment on them. I think Trek do a few models with them, Giant did too on the more expensive 'Expression' models. Although experiences are subjective, I found that along gravel trails the hybrid with no suspension felt better than the efforts with suspension. I wondered if the suspension was doing anything at all, it did not float over the bumps like a full-suspension mountain bike does and there was no real cut in handlebar vibration.

Here is a Suntour offering with coil spring, preload adjuster and lockout. This model is typically found on things like deluxe Trek hybrid bikes: 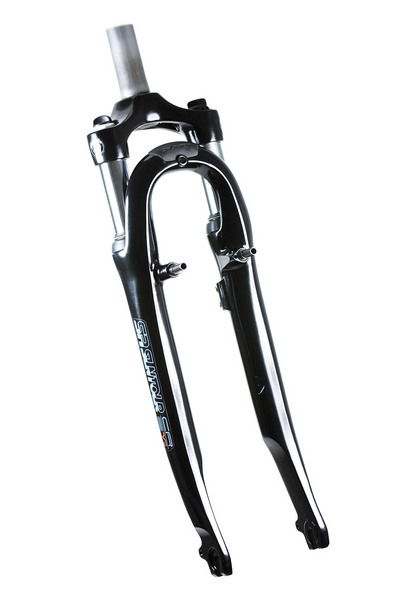 The brakes are V-brake, the hole in the top of the brace is for mounting a reflector and you cannot put a nice set of road brakes on there. Other versions of this low end fork exist for roller cam brakes, which you obviously do not want!!!

There are some more desirable models made by Suntour for cyclo-cross and the hybrid market with 'proper' air adjustment and rebound, maybe even remote lockout. I am not sure if these models are OEM only or if you will be able to get hold of them locally: 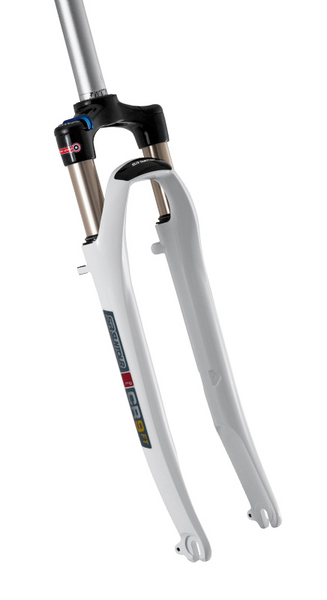 As for Cyclo Cross, checkout the Suntour NRX models, with disk and all the sophistication you could wish for in 700c: 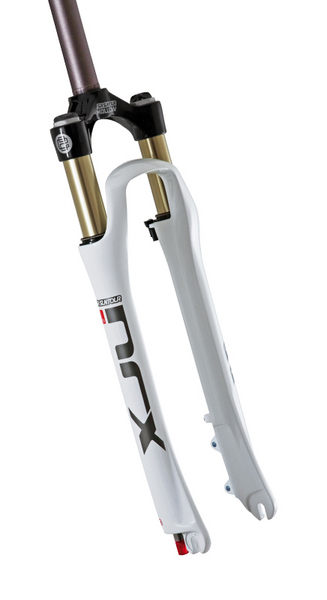 That fork should give you the ultimate in comfort for the front end of your road bike. Although for cyclo-cross it has the makings of a very tidy commuting machine... 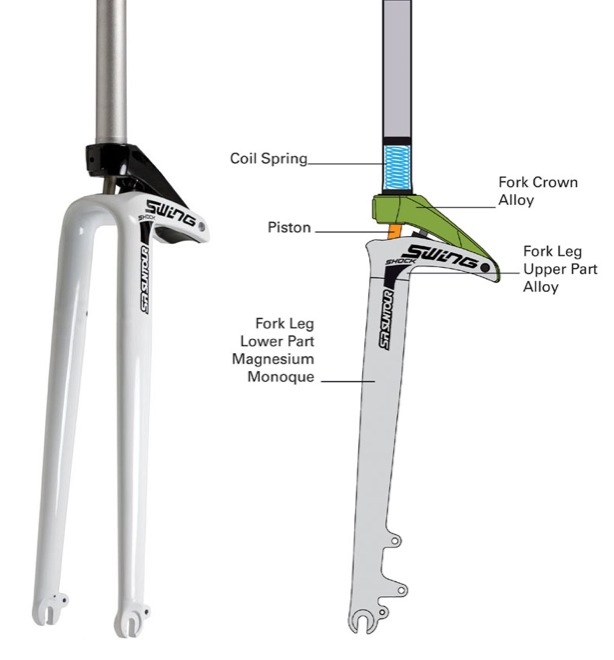 I have ridden road bikes of all sorts over many years in road races, time trials and over many miles of general riding and club runs. For most of those years the bikes had forks made of Reynolds or Colombus steels but with a reasonable rake. In later years the rake decreased and in some cases disappeared altogether with the result that the front of the bikes became almost rigid. Straight or almost straight forks may be more fashionable but they transfer all the shock directly into the rider's arms. A high quality lightweight Reynolds Tubing (or similar) front fork with a slightly raked bottom section is surprisingly good at absorbing shock.

These are not slow low-end folding bikes: the Moulton marries 120psi tires with full suspension, overcoming the handicap of small wheels to produce a fast but rather heavy bike. Since 1987, the Moulton AM7, with 17-inch wheels, has held the world speed record for non-recumbent bikes over level ground, at well over 50mph.

I've done tours of 400+ miles on both a Moulton and a Trek 520 (traditional steel touring bike). Much prefer the Moulton, because the reduced shock means less wrist and neck pain after hundreds of miles.

Having had low end aluminum, mid grade steel, and now a Specialized roubaix SL3 full carbon, can say the full carbon is the reason they dont need suspension.

The Specialized Roubaix wins on the cobbles more often then not.

Carbon is smooth and really takes most small bumps to a manageable level. All at 16lbs. Where any suspension fork is going to be 2 pounds and have trouble being as stiff enough to mee a racers demands.

Not the answer you're looking for? Browse other questions tagged road-bike suspension technology or ask your own question.