As winter approaches I am looking to upgrade my cycle lights. My commute takes me on an unlit section of canal tow path so I am looking for suggestions of a super bright headlight or cycle light that can illuminate the road ahead. Any suggesions? (UK Seller if possible.)

EDIT: In response to the comments:

In the end I went for Akslen lights:

I bought an HL100 (no longer made but still available) the front and a akslen TL605 for the rear. Prices were quite good ~ 50 UK Pounds for the pair.

A year later they are still working fine, the front is quite good for lighting up the darkness, but as it points straight forward I intend to buy an Akslen Headlight this year as well.

I also have a pair of cheap lights (£1 each from poundland) which I use as a backup.

This ultimately comes down to money, however there are plenty of other factors:

You actually need two lights front and rear as lights do fail, you do forget to charge the batteries and two sources help other road users gauge your distance. You can swap out your reflector bracket for a Cateye unit that is a reflector + basic flasher. This can stay on the bike when you are parked up and even if you forget your lights then you will have something on there.

So, what are the recommended best compromises for the main beam, if shopping in the UK?

Think long and hard about mounting lights to a helmet. Would you Blu-tak a knife to your helmet? Having a light on a helmet is not going to make the helmet perform any better when you crash. You really do not need a light embedded in your skull and a light isn't going to just move out the way when you go flying over the bars. Putting a light on a helmet is true Darwin Award stuff and makes you wonder about these people that are massively zealous on the whole telling-people-to-be-good-little-cyclists-and-to-wear-a-lid.

Due to the ever-changing availability of lights and sales, etc. I have tried not to be overly specific here, however, on balance, for bang-per-buck, in the UK, with 'warranty' issues considered, I would try to get the Cateye 610 with some extra basic flasher on the reflector bracket.

I have two sets of these lights, one on my handlebars and one on my helmet. They are:

Also, the company has brilliant customer service. They respond to questions really quickly and often have upgrade programs running where you can send in your lights and get the optics upgraded to the new models at a greatly reduced price.

They're a few $$$ but I am so satisfied with them I've recommended them to everyone I know and everyone else who has bought them has been just as happy. 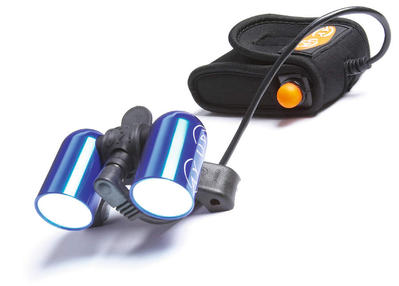 i went with cheap chinese flashlight. just get some mount hardware.

with the $200 you need for the kit Mac recommends, you can get a couple decent lanterns and rechargeable batteries.

They will be much cheaper. but there are some really good models in there.

Even cheaper is getting them directly from china, i use this site: dealextreme.com beware! it's filled with crap product. read the reviews and buy the good ones. they are very few! they have like 500 models, and only 3 are worth anything.

They also have the mounting hardware to attach the lights to the handle bar or helmet.

buying from that site will be cheaper than anything, but expect one month delivery.

I recently had a 10 mile ride in a rural area down country lanes. I am broke, so used a £20 torch from Maplin (LED CREE technology), and made my own gaffer tape plus Velcro mount. Result. It was raining and very dark, and I could see perfectly adequately. I also used a headlight to map read.

Magicshine products are perfectly match your requirements. I've got MagicShine MJ-808 and find it very good. Not ideal, but very good. I think you should definitely have a look.

The issue with bike lights, as with most consumer electronics and everything else, you get what you pay for. While £50 is a decent budget, you will be making some sacrifices along the way.

In a front light that illuminates, rather than just allows you to be seen, it will require more power, which means either buying lots of AA/AAA cells or using rechargables - so you'll need to factor these consumables into your equation.

From the top-end options, e.g. Exposure, Hope, Lupine et al, where you'll be spending well into three figures, as you come down in price, you will need to decide what's important. Cheaper models won't stand up to punishment - your canal tow path, is it bumpy? How good a mounting bracket does your light have - will it fall off easily and disappear into the water?

How long will it last? Modern LED models generally have great lifespan, but the cheaper the unit, the cheaper the components. They might last you this winter, but next and the one after? Do you want to spend £50 every year or spend a bit more and replacement less often?

Of course there's the other option of changing your route to avoid the unlit section - that's free and doesn't need special equipment!

For what it's worth, I have an Exposure Toro front light which was expensive but is now almost two years old and the light and batteries are as good as the day I bought it - still absolutely great when in on an unlit trail. Worth every penny.

I suggest visiting the following link at Peter White Cycles. They have comparisons concerning the different types of lights. Hope this may help.

Not the answer you're looking for? Browse other questions tagged safety product-rec uk headlights off-road or ask your own question.

8
Headlight recommendation
2
Can a headlight battery be reconditioned if it won't hold a charge?
2
Flickering light, Lumotec IQ Fly Senso Plus with SON hub-generator
2
Can you recommend a fixed LED headlight for a bike with a hub dynamo?
5
Is it possible to get a light that is too bright?
4
what are good training program for offroad racing?
2
How can I use my small flashlight as my bicycle's headlight?
3
Which strategy of using the bicycle light should I select?