Big dent on frame: How did this damage happen?

I just bought this second hand Ridgeback Impulse folding bike for my partner. I'm a wheelchair user and it was dark and rainy when I collected the bike.

So... I didn't check it (facepalm) I just got the seller to put it in the boot for me.

It's been in the boot for 3 days, folded, and as far as I am aware, nothing has happened to it while it's been there.

Took it to the bike shop (and nothing happened on the way there either), and we notice a big old dent on the frame, in a bad place, which means the bike is unsafe.

Seller thinks I did it, I think she just didn't notice it. She has no photos on the affected side. It's pretty hard to spot unless you're in the lighting conditions that we were in when those photos were taken. It also looks almost like it's meant to be there - until you realise there's no reason, there's also a crease down the middle of it.

My question for you guys is... in your experience - how would a dent like this happen? Could it happen from a folded bike in the back seat going over a road hump? etc? What force would be needed to make a dent like this? It's pretty big - and would have been inside the fold if it happened in the car. Just don't see how it could have happened, while the bike was folded, in a car. But at the same time, if it has been me, I don't want to screw over the seller either. 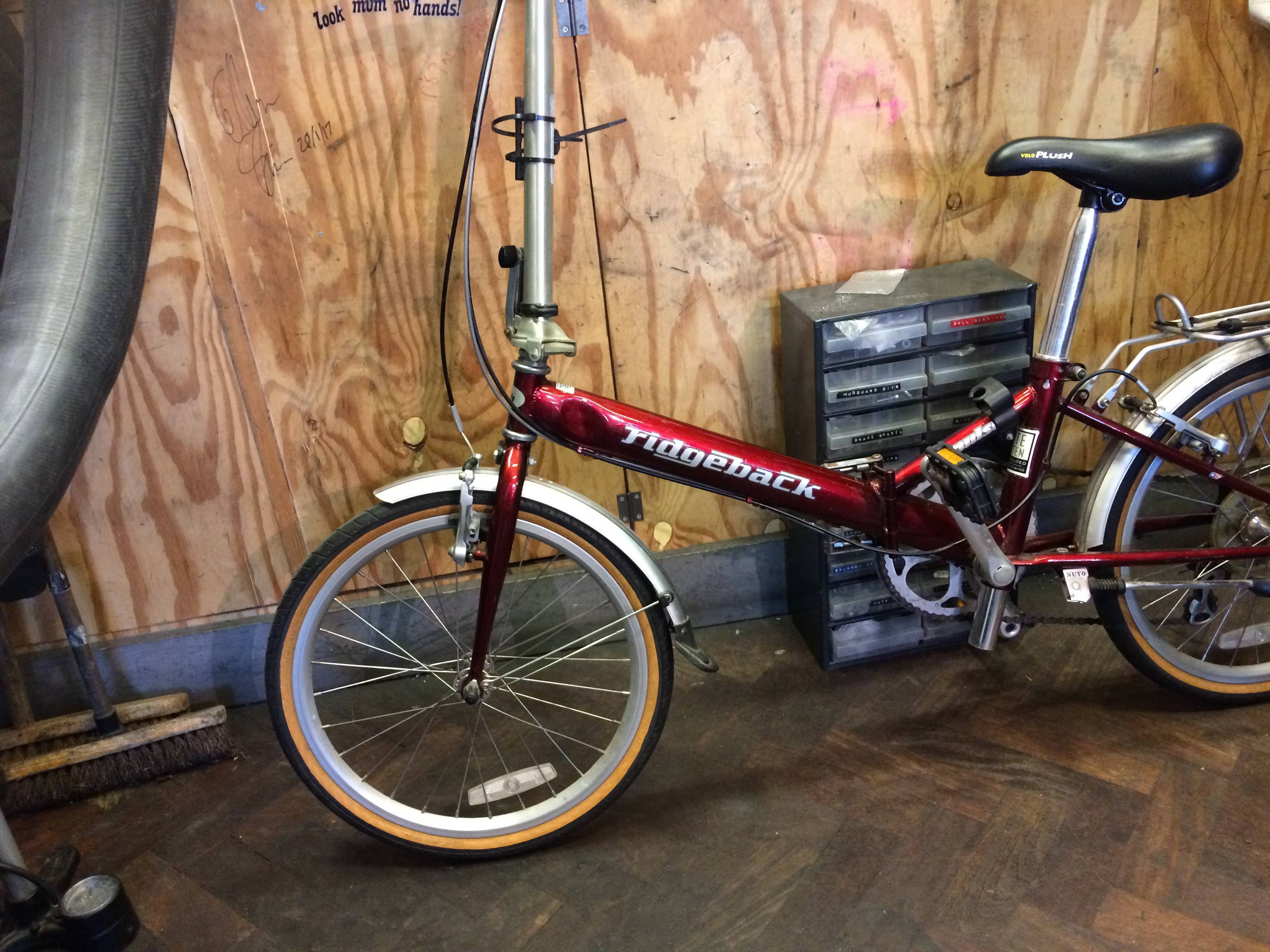 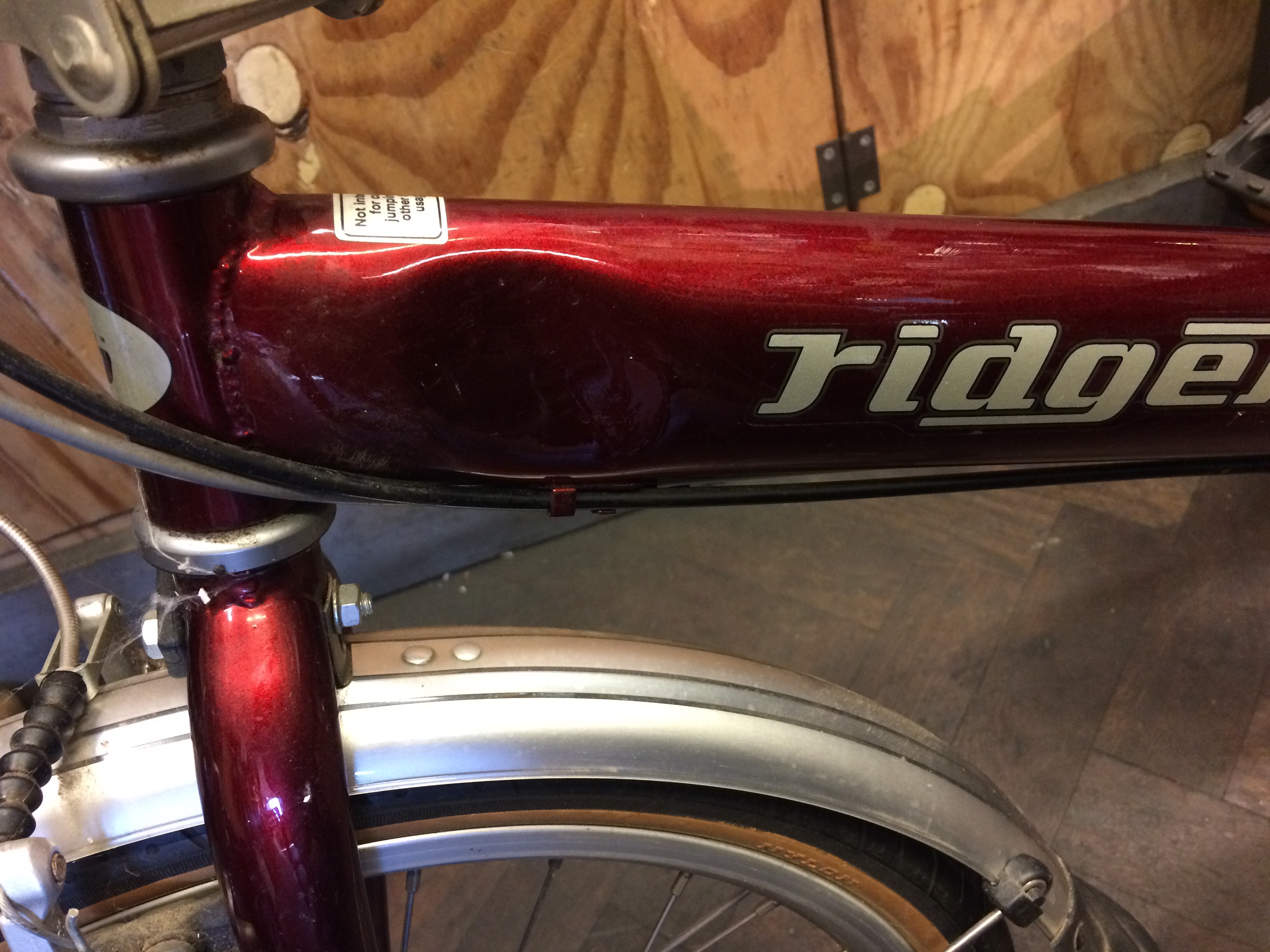 It seems that this dent belongs in the bike.

Here are two photos of a similar bike. While they are of low quality, the dent is visible: 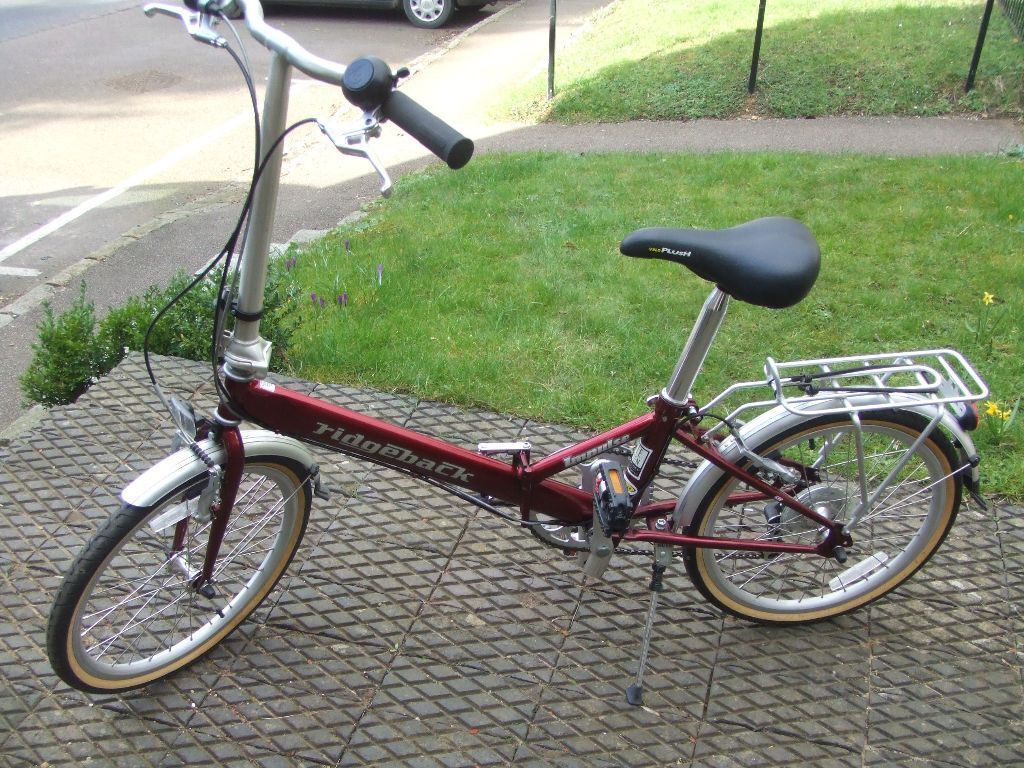 However, as pointed out by Lamar Latrell in comments, in your second photo the weld to the headtube has a dark spot in it. I cannot tell from the photo, but you or your bike mechanic should check if it is a damage in the weld seam, or just damaged paint.

If it is damage then no one here can say for sure how it happened.

However, it's in the realm of impossible-ish for a dent that severe to happen without paint damage or a clear mark in the paint from whatever did it. It sure looks like it's there intentionally to buy clearance for the steering mast when folded. If folding the bike up corroborates this, there's your answer.

If it did somehow happen via the mast or another part of the bike getting smushed into it, that would have taken a huge amount of force and then it would be an unlikely coincidence on top of that for there to be no paint damage or damage to the mast or wherever else. So that's probably not what happened.

I think you'll find that the handlebar 'stem' folds to the left, and will line up with the dent when folded.

If the dent is not supposed to be there, my best guess is that the handlebar was folded then, pressed into the frame, perhaps be the wheel and fork being forcibly turned to the left.

The dent just does not look like it's accidental. There are no paint cracks and the seat stem presumably is not damaged. Any force that could dent the frame like that surely must have damaged something else too.

Not the answer you're looking for? Browse other questions tagged folding-bicycle damage or ask your own question.

4
How do I fix a dent on my frame?
4
How worrying is damage to a carbon fiber frame near the bottom bracket?
3
Repair superficial damage to a carbon frame
5
Are folding bikes less efficient than full sized bikes?
5
Dent in titanium MTB frame, is the frame OK to ride?
3
Can a tire that blew off a rim be safely used on another rim, and under what criteria?
3
Headtube dent, how safe is it?
1
Frame with dent
1
How can I replace my front cog… or fix slipping off on folding bike?
13
Front disc brake wobbling / grinding on pads after full braking and minor plunge