I am having problems with the tubular tires I use in my everyday commuting in Madrid. The first sketch shows how I mount it, the second shows my wheels after some months of use. 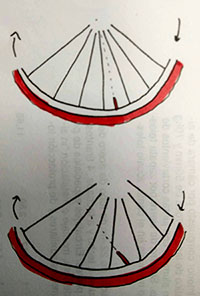 It loses its orthogonality. As I am too lazy, I didn't repaired it and my tyres have a "bump" in the area of the valve. In this moment, one of my tyres is losing air probably due to the attrition with the rim in the area surrounding the valve.

It happend once before, so last time I decided to more-carefully follow the instructions of the Contintental glue I am using. Of course, they ask you to even apply several layers of glue before applying the final one, waiting 24 hours between each. I didn't do that, but I at least applied one layer before the final one and waited the asked times between tasks. I am also using the base coat for the rim of the previous tire because it doesn't look bad.

I would like to ask you if this is normal for you and what do you recommend to do to improve the gluing or mounting process. Next time I will try to follow ParkTool instructions for gluing tubular tires, which are not so different to what I was doing.

I was thinking that it may be cause of the extreme warm weather we have in Madrid City in summer. My commutes are 13km long and the road is burning. Air temperature is sometimes higher than 40ºC.

I've glued a lot of tubular tyres and never seen this issue with any of mine, so it's certainly not normal. I've also raced on them in temperatures exceeding 40°c, so I don't think that heat should have caused that either. I also leave the base coat on the rim if it's in good condition, so as long as the glue on the rim is still in a good state, that should be fine.

When you mount the tyre, is it a very tight fit onto the rim, making it a real struggle to get the tyre on? If the tyre isn't a tight fit onto your rim, then you need to make it a tighter fit before putting it on. You can do this by applying more layers of glue onto the tyre and the rim before mounting. You can also install a tubular rim tape on top of the base layer of glue to add height to the rim, then install the tyre on top of that using more glue again. If you don't make a bit of a mess wrestling to get the tyre onto the rim before the glue dries, then it isn't a tight enough fit.

Many people suggest leaving a small area of the rim unglued on either side of the valve to make it easier to remove the tyre when it eventually needs replacing. If you're following this advice, then stop. You should be gluing the whole rim for safety (not rolling tyres) and to prevent issues like you're having now.

After mounting the tyre, what do you do? Do you inflate it and then ride it immediately or leave it deflated for a while until you need to ride it? Immediately after mounting a tyre on a rim, I inflate it to 50 psi to make it easier to check that it's on straight and has no hump. If it's not on perfectly straight, I'll let out a little pressure, straighten, reinflate, then repeat until I'm satisfied. Once I'm happy with how the tyre sits on the rim, I inflate to 130+psi. Refer to your tyre for max pressure and put it to that, if it's not listed then just pump to 130. Leave the wheel like that for 24 hours then you shouldn't need to adjust it until you replace it.

When you remove a tyre, how easily does it come off? I glue my tyres on well enough that I prefer to cut them off when they need replacing. It otherwise takes me over half an hour to get it off, with my fingertips being very sore by the end. If yours are quite easy to remove by hand, then they are not glued on nearly heavily enough and will have issues like you're asking about or more concerningly, will lead to the tyre rolling off in a turn while riding. The answer is more glue, both in terms of how many layers you put on and how much you put in each layer.