Help determining spoke length along with an education

I understand that there are spoke length calculators and I have an understanding of what variables are at play when calculating spoke length, though I remain absolutely lost when actually attempting to build a wheel in reality.

If someone, anyone, could help me calculate spoke length from a set of criteria I would be so grateful that words cannot express my appreciation. Though I want to understand how this calculation was made, so that I don't remain forever ignorant.

(Interestingly, I went so far as to offer payment for an education on a popular bicycle-related forum, and no one there was able to explain how to make this calculation—instead, I was mocked, while still no one could make the calculation. Why is spoke length so elusive?)

I want to build a wheelset from this hubset: Milwaukee Bicycle Co. Hubset - 32h

Would someone be able to help me calculate what length of spoke I would need?

If you can calculate a spoke length, can you help me understand how you came about that figure?

If you can help me, I would be so grateful that words cannot express the level of gratitude with which I would be left with... You would become adored.

There are other questions about this but honestly I think the answers in them are a little oblique when it comes to actually doing it.

There's a classical formula you can find in many sources. It models the wheel in a very simple abstract way. The hub flanges are circles defined by the centers of the spoke holes and the rim is a circle defined by the end points of all the spokes when they have optimal engagement with the nipples (this is also the commonly understood definition of Effective Rim Diameter, or ERD). Here's how it appears in Brandt's The Bicycle Wheel: 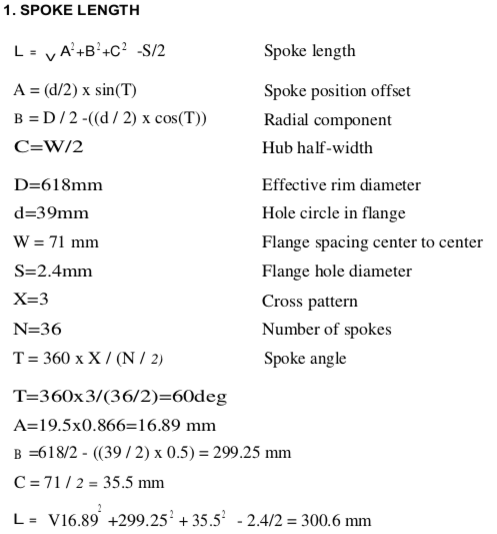 You don't have to touch any real math to calculate spokes, however, because there are many different spoke length calculators out there that are based on this formula where you just plug in your hub and rim dimensions.

One of the sticky points of spoke length calculation is that the classic formula only takes into account the raw geometry, i.e. it's just describing a bunch of circles and triangles, but in real life, the rim compresses a bit when tension is applied, and the spokes elongate. How much depends on the particulars of the rim, namely its cross sectional area, and the gauge of the spokes, respectively. There are some sources out there that give specific numbers to show how to compensate fairly precisely for these effects, but in practical terms you just round down a bit, and how much depends on having a feel for what you're working with. Rounding up from the number the formula spits out is dangerous when calculating spokes because you risk running out of spoke thread, which can lead to situations where you have to struggle and maybe fail to get the final tension you would have otherwise chosen.

Many spoke length calculators invisibly do this rounding for you, but I like to use ones that don't, so that I don't have to wonder how much they're rounding, which direction, whether the amount was chosen based on the spoke gauge I'm actually using and what the tension will be, etc. The free spreadsheet-based calculator Spocalc is what I usually use. It's an .xls but opens fine in free spreadsheet software in my experience. It uses the terms "width from center to left flange" and "width from center to right flange" for the measurement your hub's page is calling "flange width." The page doesn't specify a spoke hole diameter, which is fine because you can just use 2.6mm as a generic one for most hubs. Here's how it looks with these hubs and rims plugged in: 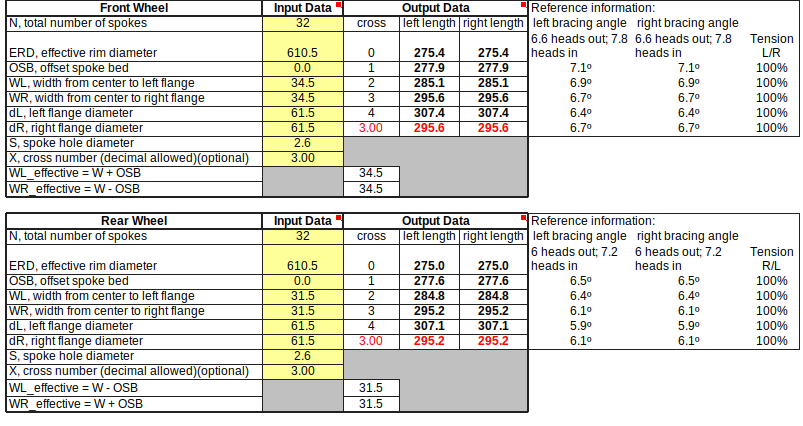 Conventional wisdom for these wheels would be go 3 cross because that will give the spoke angle closest to perfectly tangent with the hub flange. That's generally true of 32 spoke wheels with not exceptionally large flanges.

Presuming the published ERD is correct, and in real life I never, ever gamble it is even though most of the time they are, in back I would do 294 with any gauge of spoke, and in front I would just do 294 as well, although with straight gauge 2.0 I'd also feel okay with 295. In this case, presuming the ERD was measured properly to represent a spoke with its tip flush with the top of the nipple, I'd expect 294 to get them both right about in that perfect range of somewhere between the base and the top of the screwdriver slot in the nipple, and with no danger of poking out the top, which I avoid at all cost. Realistically 295 would likely be fine for the front, as it may cause a slight bit (0.1-0.3mm-ish) to protrude out the top, but not more than most spoke/nipple combinations can handle. I just play it safe.

Also, everything here presumes 12mm nipples, the most common choice for handbuilt wheels. Longer nipples have more thread and change your ERD.

The actual math - for free.

This is not done in exactly the same way as the calculation from Brandt's book in Nathan's answer but it will give you and idea of how it's done.

If spokes are radial the calculation is straightforward. 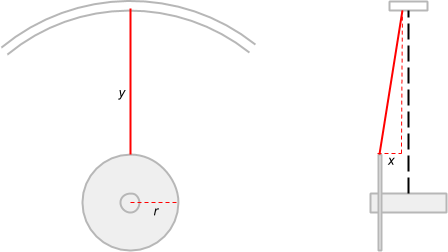 On a wheel with a cross spoke pattern, the holes in the hub and rim the spoke passes through are offset rotationally.

Now you need to take into account w and z. If you know those the spoke length is: 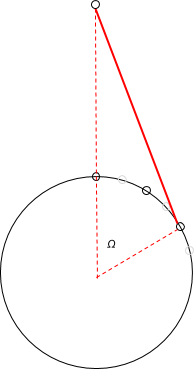 N is the number of spokes

17
How do I calculate spoke length?

17
How do I calculate spoke length?
2
Selecting spoke lengths
4
Rim dish and flange angle problem
3
How to replace a spoke on a rim with no spoke holes?
3
Spoke Length +- 1mm
4
Why would spokes break at the flange early?
11
Best way to strengthen a wheel?
1
148-to-141 conversion effect on spoke length?