What method or algorithm is used for computing power curve on Strava?

Many cycling analytics apps like Strava, TrainingPeaks or GoldenCheetah are offering the critical power curve chart, computed from the power meter data.

I'm familiar with the curve meaning and usage, but I'm curious how the curve is computed from the time series. I guess it is a more general statistical method, but my search for the literature with method description was not successful so far.

The Power Curve shows your best average power for time periods of 1 second up to the length of your ride. We search your entire ride and find these best efforts and you can compare them with your best efforts for your last 6 weeks, the current year, years in the past, or all-time! 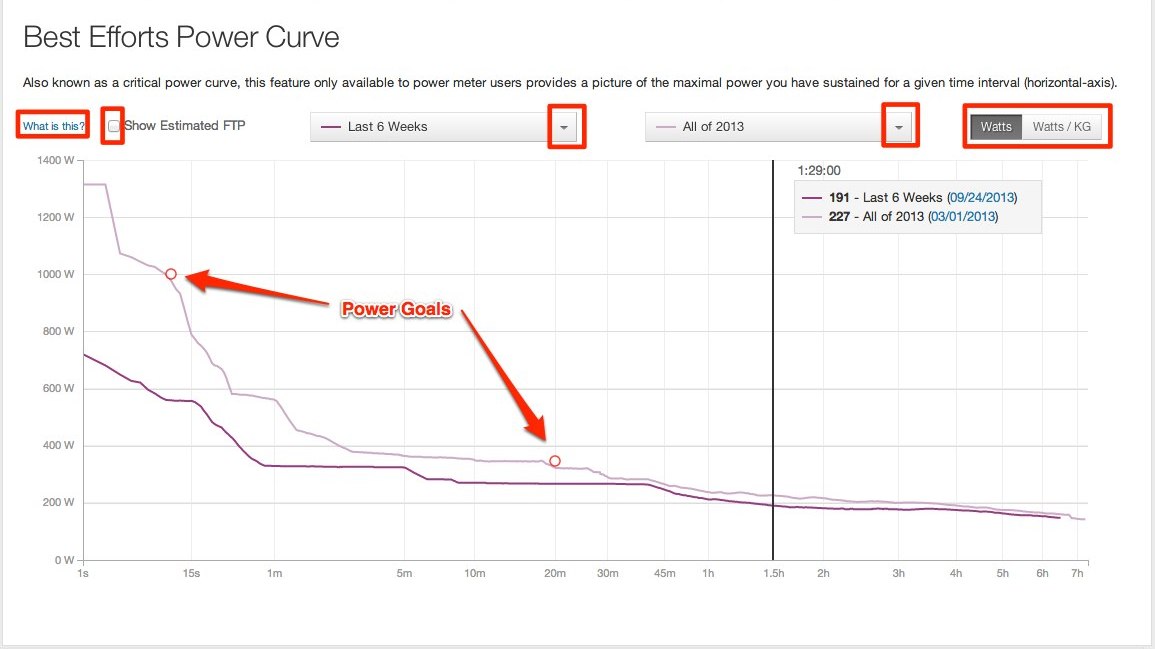 In the past might have been done with lab experiments (e.g., you warm up, then do a maximal effort on a bike ergometer or on a power meter equipped bike for a series of set durations), where you would then infer intermediate points based on some type of interpolation or statistical model (e.g., Monod-Scherrer).

With continuous performance tracking (i.e., bike computer + power meter) this can be done empirically by querying all data within a ride or over a period of time (e.g., last 6 weeks) to determine the maximal power over a set of differing time intervals. These independent queries are then used to build the power curve displayed.

The Strava Power curve, is therefore an empirical curve based on cherry picking your best efforts for a series of durations, dependent on context (i.e., current ride or past effort(s)).

If you never put in a hard effort for a given duration in your ride, or in the past, then the empirical curve will underrepresent (i.e., biased low) your actualized potential if you were to do a real maximal effort. That said, if you didn't put in an maximal effort over a given duration (e.g., a 5 minute interval) you will clearly see it in the power curve associated with the ride, as the curve at the 5 minute mark will be lower than your historical best.

What About Statistical Model Fitting?

Another possible way to generate the curve is to assume that the true power curve of the athlete (what you would like to estimate) follows a particular mathematical form (i.e., parametric) and estimate the parameters associated with that mathematical curve based on your observed values and some sort of objective function (i.e., likelihood). The problem with this approach is that you have to get the form of the latent curve correct, which can be difficult as people do not have uniform abilities across differing timescales.

For example, some athletes may have very strong short-duration power (e.g., 30 second CP), but lousy long-duration (e.g., CP60, otherwise known as functional power threshold [FTP]). As such correct form of the parametric curve will depend on the athlete, making a generalized fit routine problematic.

There are of course other alternatives that are more flexible with regards to the shape of the curve. Some of these include fitting splines, general additive models, or kernal smoothing. These are all computationally expensive and come with their own set of assumptions and drawbacks.

Given the volume of available data, an empirically based curve is simpler and likely more robust. You typically start fitting parametric statistical models when you are more data starved and each individual data point is more trustworthy.

Some details are published by Strava themselves.

Our Power Equation
The power produced while riding is made up of several components:

The total power produced, P(total), is the sum of all four power components.

Rest of document is at https://support.strava.com/hc/en-us/articles/216917107-How-Strava-Calculates-Power

Curiously, they guess Rolling Resistance based on the type of bike you set up. Also the wind speed or air density are unknown, they assume no environmental wind conditions and an outside temperature of 15 degrees C.

We have seen that in most cases our watts number are very close to the numbers provided by a Powertap or SRM.

I'd call that an optimistic statement. Perhaps the total wattage over the whole ride is somewhere within 20% but the estimate measurements at any specific point can be totally wrong. I've seen zero Watts while going up a steep hill, and peaks of 1200 Watts while steady-state cruising on the flat.

It is probably more simple than you think. The data we have is usually a series of wattage readings collected every second. Open the GPX in excel (I export a csv from golden cheeta) and then you can sort the watt column by largest to smallest. The average of the top 60 readings is the 1 minute cp, top 600 - 10 minute CP and so on. So you can just make a new table with cumulative minutes and then write a formula to grab the averages of the different numbers of top data - something like =average(large(A1:A800,1:60). This is then easily plotable from there.

1
How to interpret Strava power curves?

12
Extra power needed uphill for weight increase
2
Proper Weight input for a indoor power meter
3
Allen Coggan power profile table for Cyclo cross riders?
1
Which are better for reproducible power output: Mag- or Fluid-trainers?
3
Can a BB30 Crank Arm (Left) power meter can be used with a BB386EVO Crankset
5
Can pedal-based power meters be used as flat pedals?
3
What power meter would work on my bike?
1
How to interpret Strava power curves?
3
App for displaying 30s rolling average power