How to solve issue with self-unscrewing Praxis Convo BB for Shimano?

I am looking to solve the issue with Praxis Convo BB which unscrews by itself during the ride. What would be the best solution?

On my second ride on a Specialized Venge Pro 2019, I noticed that my Praxis "SHIMANO-BB30/PF30 CONV BB 68MM" bottom bracket is loose. I immediately stopped riding and brought my bike to the nearest bike-shop.

According to mechanic at the bike-shop drive-side cup of the BB bottoms out before rubber expanding collet even starts expanding. They installed new BB (just a new Praxis BB) but it's also doesn't sit there very tight, just barely starts expending before bottoming out.

P.S. Keep in mind that I have Shimano Ultegra R8000 crankset

Check the obvious things, which are that you have the cups in the right sides, and the expanding rubber collet parts are present and in place. It may be helpful to take the BB all the way out and then take before and after measurements with a caliper to confirm that it's actually expanding as much as it should.

Since the Praxis BB is probably going to readily fall out of the bike when you remove the cranks anyway, there is not much oppurtunity cost in this case to doing so and taking the basic measurements of the shell.

It is easy to measure the shell width from point to point and take a sampling of simple point to point measurements of the bore with a vernier caliper. That is usually sufficient to find most problems with tolerances if something like this is indeed the frame's fault, although there are some other ways a BB30 shell can be out of tolerance that need more sophisticated tools to pick up, i.e. the alignment of the bores relative to each other. Here are the official numbers BB30 shells are supposed to conform to: 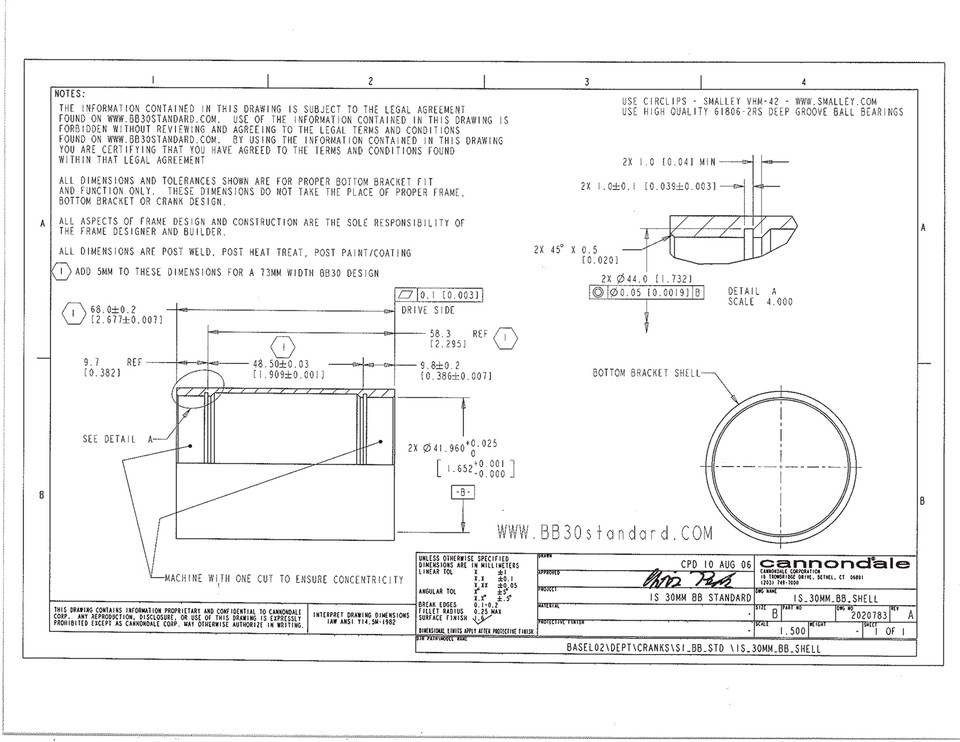 It is pretty common for frames in practice to be out these tolerances. But, I also have no experience with the Praxis BB in question.

A likely way to make the bike functional is put in a normal BB30 bearing set (not a conversion bottom bracket, just the set of bearings and snaprings that numerous companies sell interchangeable versions of), use retaining compound on those if indeed there is a problem with the bore being too large, and then use the plug-in type 24mm to BB30 adapters. The downside here is you could be letting Specialized off the hook in some sense if in fact there is a problem with the frame, you're giving up on the promise of a screw-together bottom bracket to mitigate creak problems, and the bearing spacing is unnecssarily narrow for a 24mm crank, which is another nice thing about the screw-together concept. The positive is that it's likely to work and it's likely what you'll get sooner than you would a new or reworked frame if you try to warranty it through a Specialized dealer anyway. There are a lot of problems in the world right now with out of spec BB30 frames, and slathering bearings with retaining compound has become the de facto solution to many of them.

You could also try another company's similar screw-together 24mm-to-BB30 product. This would be reasonable to do if you found the problem was with the Praxis unit, i.e. you found that it wasn't expanding like it should when you measure it out of the frame. To my awareness, most of them pinch rather than expand, and so it would be hard to see them having this kind of problem.

Is it a threaded bottom bracket? if so maybe apply more grease and torque it down to the manufacturer's recommended amount. if that doesn't solve your problem, maybe go to a bike repair shop and get it checked out.

4
Attaching crank arm with Shimano SLX M660
1
Shimano Ultegra Bottom bracket replacement with Dura-Ace
1
Tool for shimano bb-un26 Bottom Bracket
0
Technical documentation for Shimano FC-M510
2
How many spacers I can put on a Shimano hollowtec 2 BB for a 68 mm BB shell
0
Issue with PF30 BB on Boost frame - 2-3mm crank arm clearance
2
Can I use an outboard Shimano BB on a Trek madone ALR (alum.) with pressfit BB?
0
Can I replace Record bottom bracket with Shimano?
3
Shimano crankset with FSA bottom bracket?
2
Replacing 1x SRAM chainset with a Shimano chainset