New disc brake frame feels heavy at the back

Just bought a Cube Attain, and it is heavier than the Felt F95 that I just crashed. I liked the feel of that bike, but wanted disc brakes for the hills I ride - tried upgrading the brakes on the old bike.

The new bike feels heavy at the back, is it that it has a bigger cassette (34 tooth), or the discs (hydraulic)? I doubt that it's the wheels as they weren't great on the old bike. Wheels are supposed to weigh 1740gms which doesn't seem too bad.

Bike is same frame size, with the same amount of exposed seat tube. Frame is aluminium again, with carbon forks - again, the same as the old bike.

Geometry is very similar apart from seat stays which are lower down seat tube than old bike. Through axles on new bike, and 142mm axle on rear.

Irony is that although I have a bigger cog on back, I need it to get up the same hills I did on my old bike with 6 teeth fewer.

Anything I can do?

Cube Attain SL Disc in 2018 weighs 9.8 kg according to the maker, and has disks front and rear. The brakes are

The Felt is 9.54 kg and has rim brakes. Sadly is a little vague.

RESULT: The cube's disk brakes weigh approximately 850 grams more than the felt's rim brakes weight. That the whole bike is only 350g heavier will be down to weight savings elsewhere.

Another point is that the disks are both slightly further forward and further aft than the rim brakes, if everything else was equal. The lengthening of the weight on the Cube will help on a fast straight, but will slightly resist turning more than the Felt.

But I feel there's something more to it than "heavy back end weight" Lets look at the other significant difference.

Here's a blinky between the felt and the cube. I've tried to position the two wheel axles together, and the ground as the consistent third point.

Break that down more - here's the older 2013 Felt with a wire on the centerline of the frame: 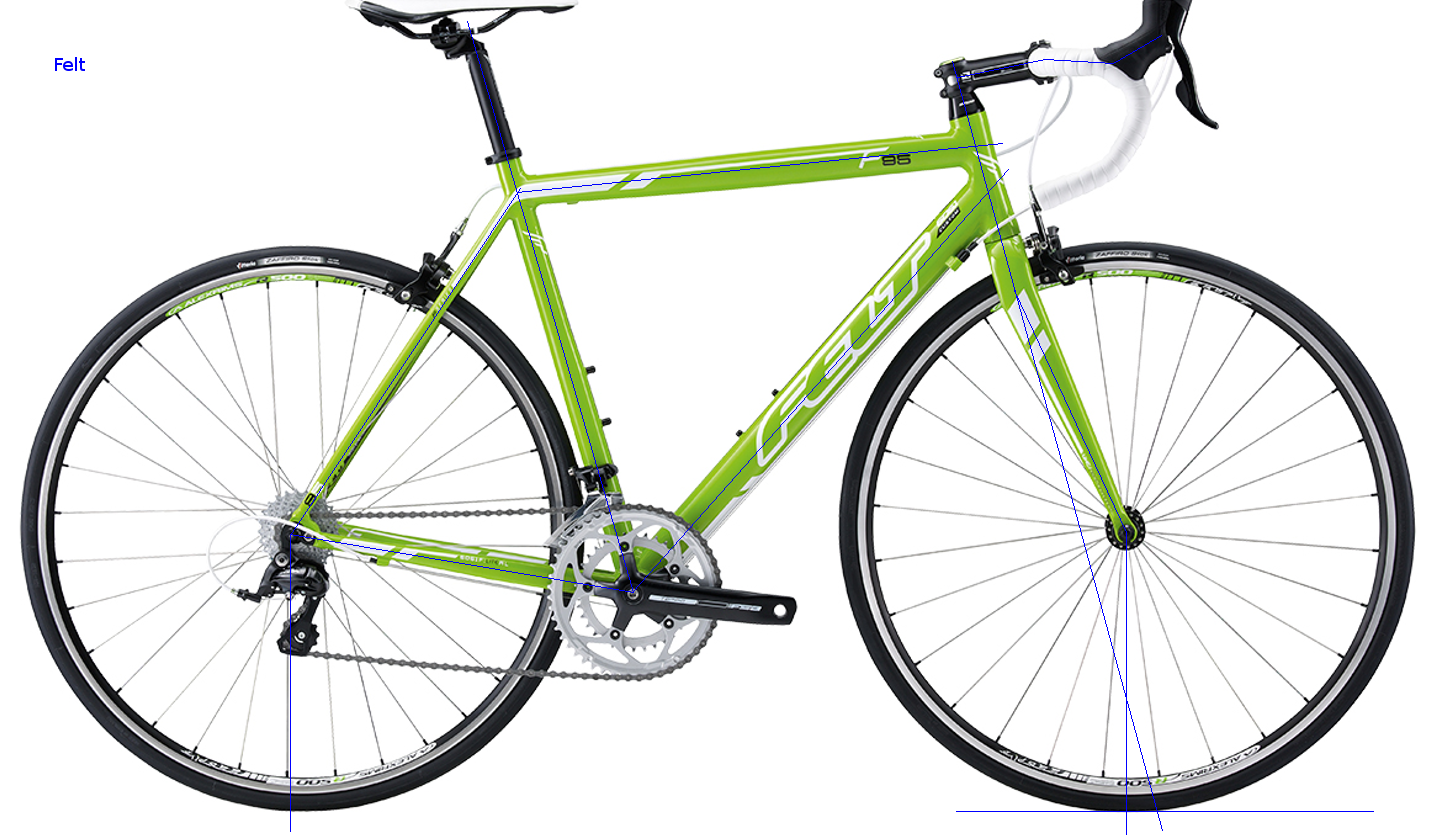 And the same for the more recent Cube 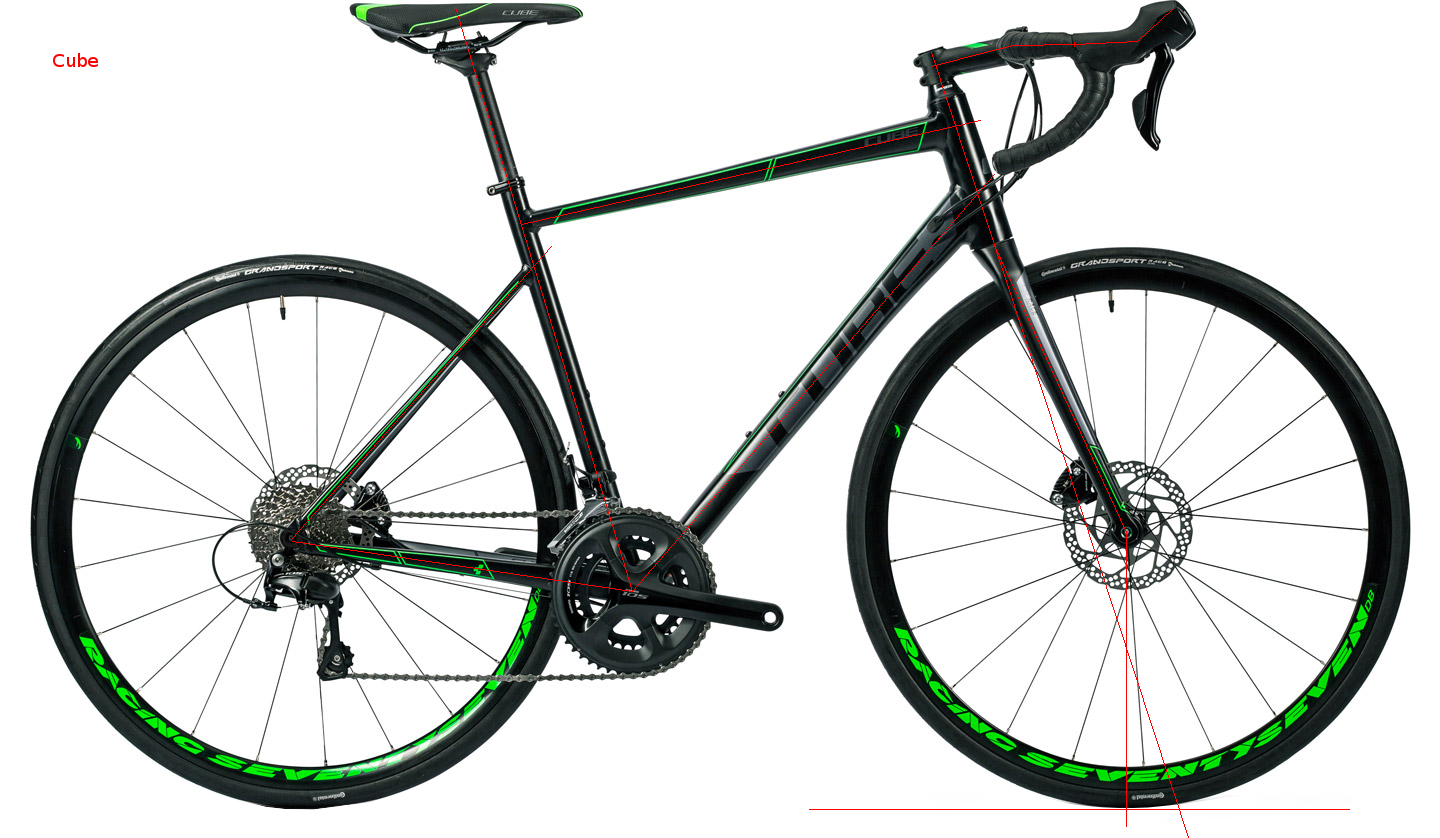 From that, we can see the seat tubes are pretty much identical. Downtube and chainstay are very similar (allowing for distortions in two different photos) The seat stays are significantly different line, but that's probably going to have more impact on compliance over bumps rather than handling.

Sherlock Holmes once said something about eliminating all the possibilities and whatever remains must be the cause. So if its not the backend, perhaps its the front?

This leads to the Cube having just about double the trail. And we know that:

The newer bike's geometry at the front makes for more stable and solid steering. You'll be more planted and confident at speed and on descents. The trade off is slightly more effort is needed to turn, with slightly more commitment required to initiate the turn. But the bike will want to straighten up by itself.

I suspect the Cube is much easier to ride no-hands than the Felt ever was.

Go with your gut - either return it now if you think you'll never like it. Or give it a 500-1000 km of riding to get acclimatised. I know I take double that and more to get really at home on a bike. Check out some hill descents that you may have logged in Strava or whatever from the Felt, and compare them with efforts on the Cube.

Not the answer you're looking for? Browse other questions tagged wheels upgrades or ask your own question.

5
How do I correctly align the brake disc with the callipers when replacing my quick-release wheel?
6
Just found a vintage Sears & Roebuck 'Ted Williams' Free Spirit 3 wheeler. Can I modernize it?
1
Correct wheel size for a vintage Peugot
3
Will disc brakes aggravate the problem with spokes pulling through the rim?
3
Can I run a 700c/28"/29er wheel & tire on a 650B full-suspension mountain bike frame?
3
Upgrade cranks, chain, gears on a Carrera Vengeance MTB
2
Rebuild or replace rear wheel on Giant Escape 2 (2016)?
3
What to do with the new parts on an old bike I want to dump?
3
Does it make sense to switch to single chainring on an older mountain bike?
2
Upgrading an old road bike