I am seeing a lot of photos of bottom brackets with what seems to be factory-applied red threadlocker. Are manufacturers actually recommending the "permanent/heat needed" variety of threadlocker compound for BBs? 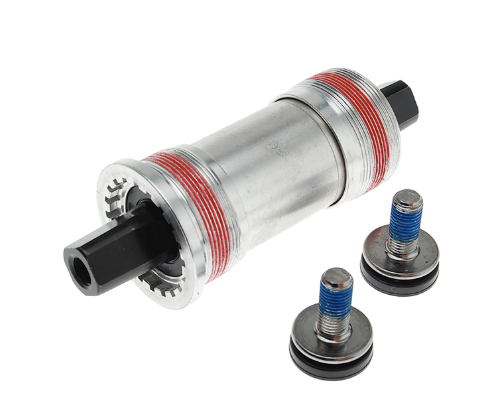 No, it's because the colors are not a universal indicator of what grade/type a particular compound is across brands. Loctite/Henkel products do use their color scheme to communicate strength level, but even there it's more complicated than that because there are different compounds that are the same color and might differ in other attributes like gap tolerance, cure time, need for use with a primer, oil tolerance, etc. People love oversimplifying this point when they talk about threadlockers, but the fact of the matter is there's a whole lot of different compounds out there with very different properties.

The type of pre-applied threadlocker some bottom brackets come with seems to usually or always be somewhere in the medium strength category regardless of what color it is. You'll find examples in blue, green, red, and white, but in practice in this application they all do more or less the same thing, and they don't in and of themselves create situations where extraordinary measures have to be taken to remove the BB later.

A BB manufacturer might have more to say about this, but personally I've always perceived those partial bands of pre-applied threadlocker on cartridge BBs as being primarily an "at least they'll definitely have something" notion, i.e. a bit of corrosion and loosening insurance for the person or factory that's going to put things together dry no matter what, as opposed to ever being the only thread treatment I need. I always use grease or anti-seize on the entire internal surface of every BB shell (or a full coating of medium-strength threadlocker in the case of the right-threaded drive side standards, Italian and French, plus in special cases like Phil Wood BBs). On a certain level this seems wrong or backwards because the dogma is that threadlocker and grease aren't supposed to be on the same threads at the same time, and yet manufacturers who put threadlockers on their cartridge BBs tend to have it in the instructions to grease the threads.

Permanent/very strong threadlocker or retaining compound on BB threads would be a mistake. Medium strength is enough to add a ton of resistance because BB threads are so fine. Phil Wood bottom brackets more or less rely on the cups being loctited to function and still a medium strength (Loctite 242, one of the really common blue ones) is all that's recommended. In this case you're painting the threads fully with liquid threadlocker, which is then capable of providing protection against corrosion with about the same efficacy as grease or anti seize.