I just got an old, worn and rusty MultiTrack 750. I like the older MTB/ATB frames so I wold like to use this. The size fits me perfect but it rusty... What would you do?

I've looked in the old catalogues but can't find this bike.

If so I would like to make it useable but not necessarily with original parts. 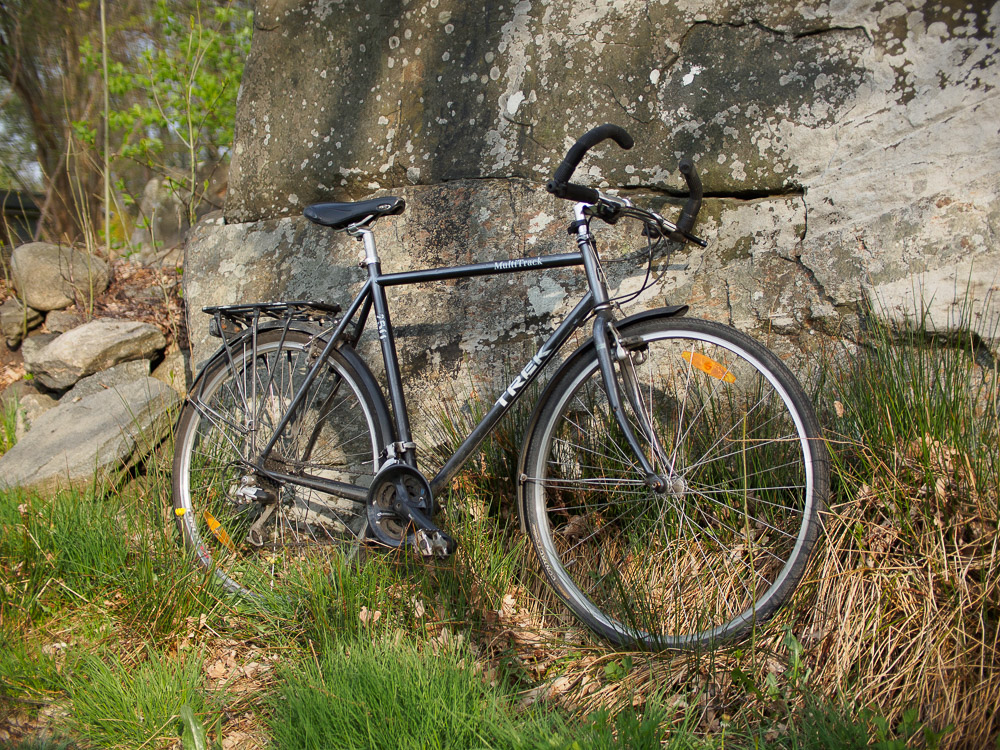 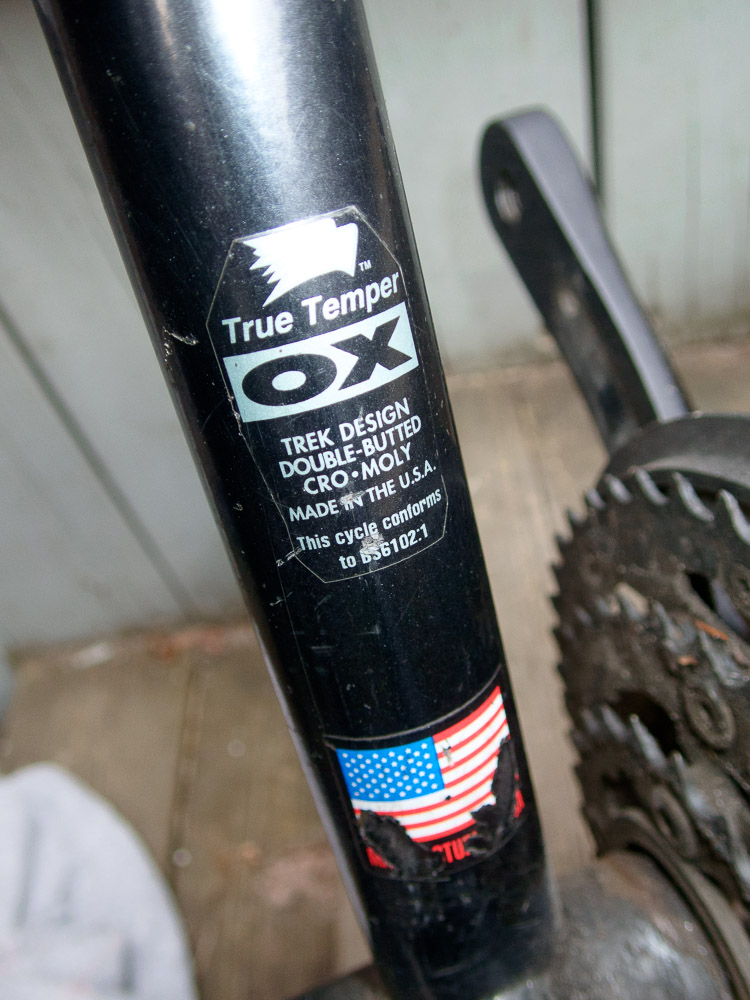 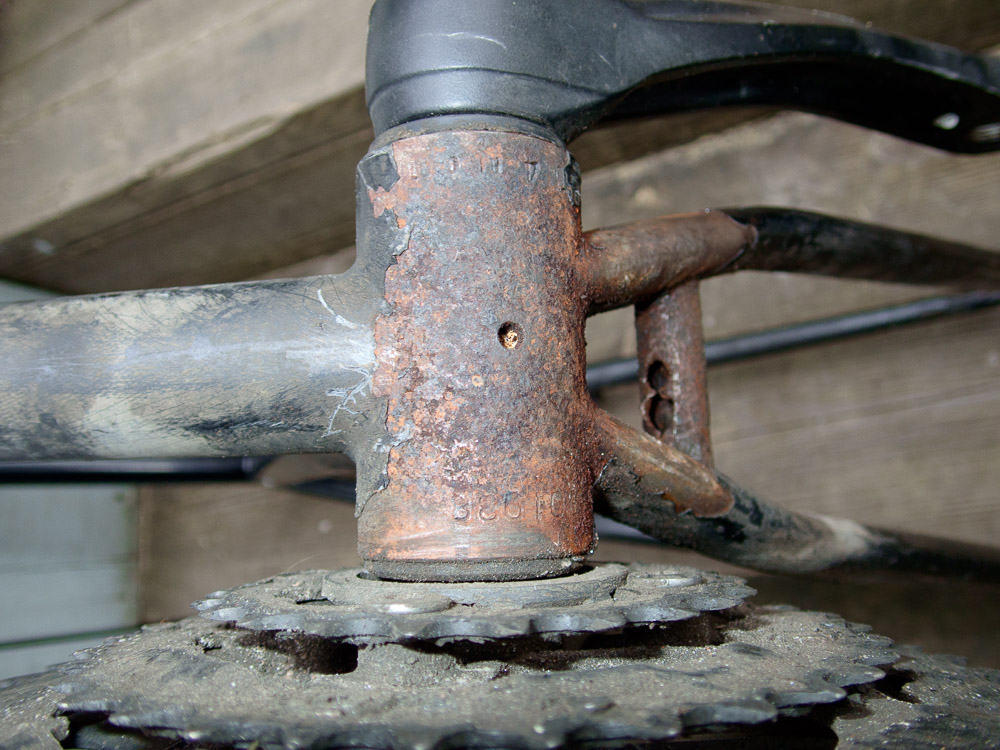 Update. I filed away all rust and have been painting it myself. 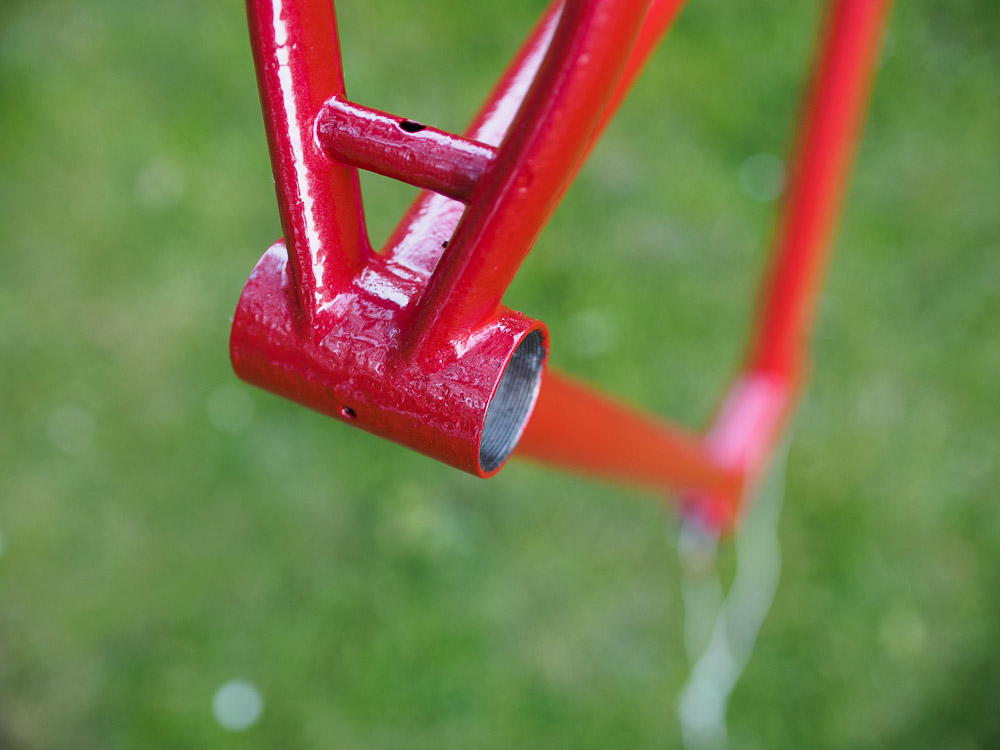 It's a 1996 Trek multitrack in ice black, I believe. I have the same bike. I found trek brochure with the specs. Originally a 7spd with a triple crank. That crank does't look like the original one?

That bike is a good find. The double-butted frames are more desirable than the TIG welded later models. It's unclear to me exactly why other than a general assumption of it being a higher quality frame.

As mentioned in the comments, something must be done to inhibit the continued oxidation of the cro-moly steel frame. Generally, two things must be accomplished: complete removal of the rust that has already formed followed by refinishing the now rust-free areas of bare metal with a high quality primer and paint. Keep in mind that the best paint jobs result from meticulous surface prep. After completely removing the rusty areas, use ever-finer grades of sandpaper in a stepwise fashion to bring perfect smoothness to the areas to be painted. Removal of all dust, dirt and oils--any contaminants--–with a mineral spirits based pre-finish product just prior to priming is a key step that is often under emphasized but vitally important for a successful end-result. Here are some example videos/tutorials on that aspect of restoration.

I'd suggest the subsequent phase of a project like this is determining how the bike will be used a majority of the time. This helps form the pool of possible component combinations to best suit the intended use. A good place to start would be whether the set up will have flat bars or drops, and the size and type of crankset. These decisions then lead to your pool of derailleur/shifter options.

The Multitrack is a versatile creation that came stock with a Shimano mountain power train that spun road- like 700c wheels and 38mm tires, which is approximately 10-13mm wider than road standard. I'm certain the BB shell is 68mm and threaded and a modern compact road crankset with outboard BB bearings should work equally as well as a mountain triple spinning around a square taper or splined cartridge BB.

This will be a fun and interesting project. I love the fact that a quality machine may realize it's potential as a source of transportation, recreation and joy for multiple generations.

Disclaimer: circa 10 years ago I bought a Trek 750 with the same paint scheme, in similar conditions. At the time, I identified it as a Trek 750 from 1996. I kept the frame and fork and the bottom bracket, bought a used rear wheel with 9 gears complete with derailleur and shifter, as well as a super cheap (and heavy) triple crankset. It was a fantastic bike, I used it as a multiday touring bike (sort of adventure bike, road and gravel) and as a commuter bike (quick and relatively light). Stolen from my cellar, so I hope someone else is enjoying it.

As mentioned in the comment, the chainstay bridge looks fishy (that much rust and 2 holes?). Be ready to say goodbye to this bike soon.

However, if - the fork is smooth, and it is not bended; - the pedal cranks are not wobbling

http://blog.peterlombardi.com/?s=trek+750 (it is an older model, different frame but similar configuration regarding fork thread, eyelets and so on...)

some picture to backup my claim 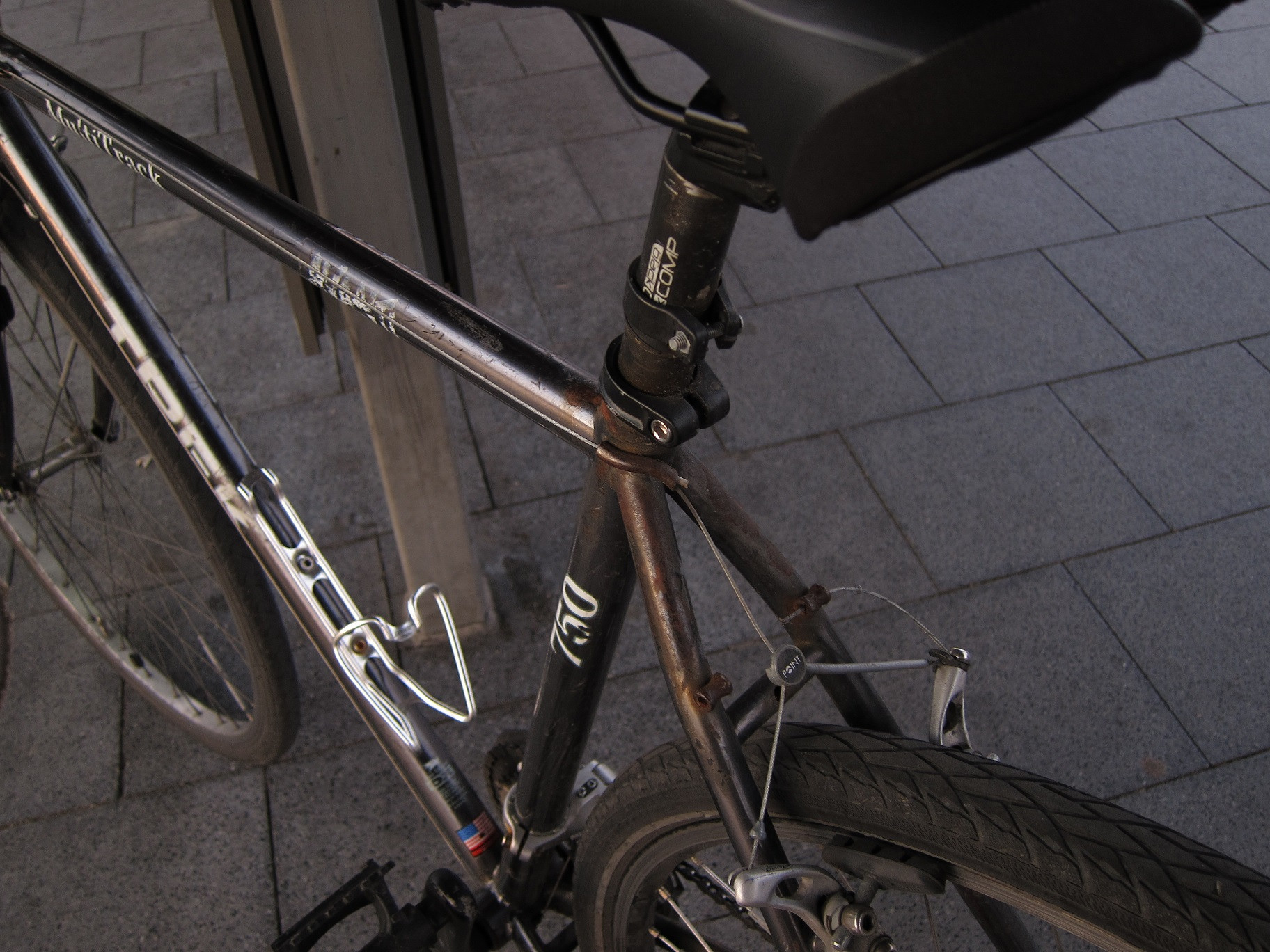 a lot of rust, never had structural issues 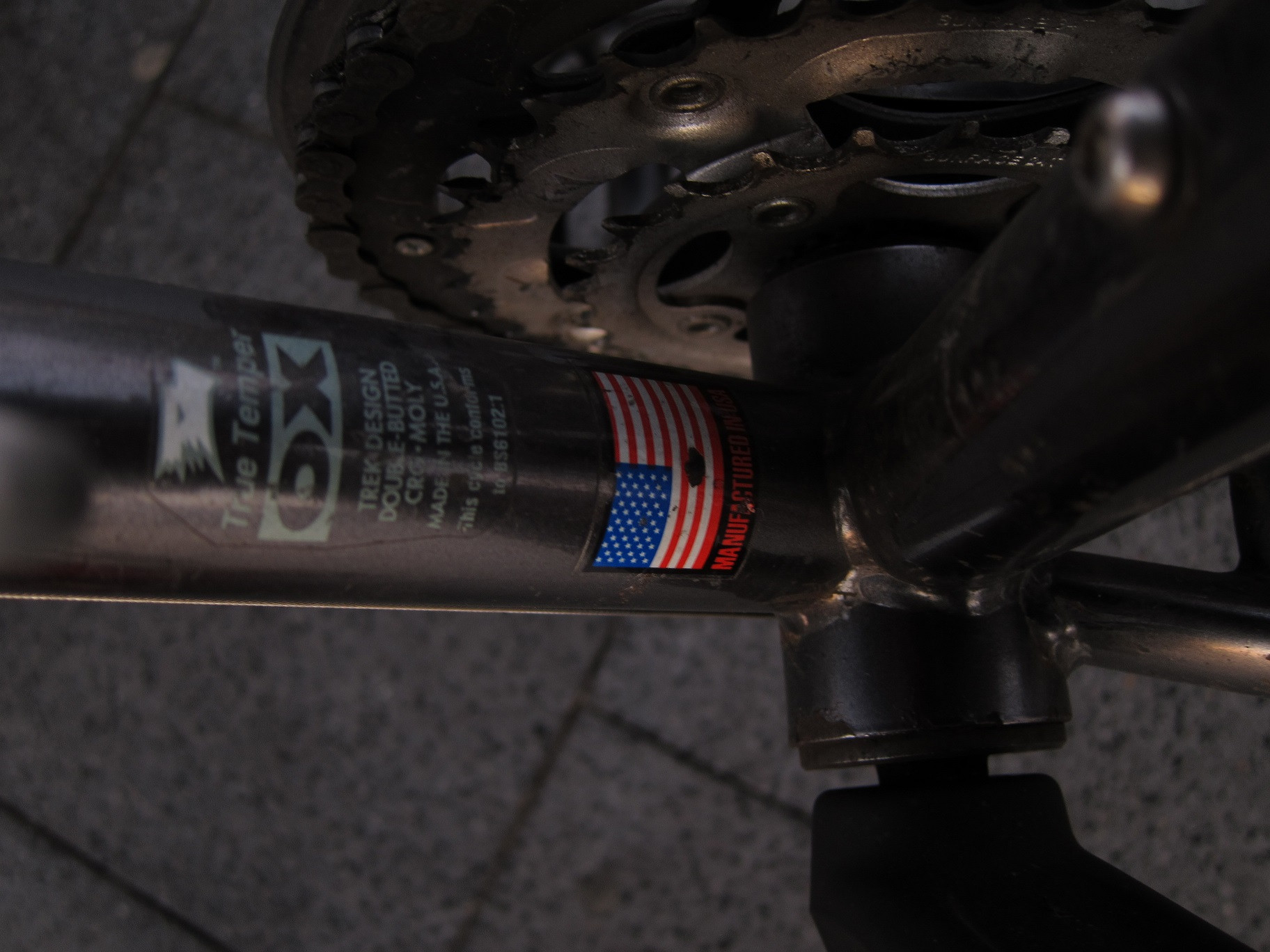 your flag has weird scratches. Note the very famous sunrace (?!) cranck I installed

Not the answer you're looking for? Browse other questions tagged trek or ask your own question.