Can I grease a crank spindle/bracket without disassembling the crank set?

A bit of history: the grooves on the spindle are partially destroyed/skewed by cycling with a loose crank, so I applied a lot of force to a hexdriver to get the crank arm on. Now, it would be quite hard, if possible, to disassemble it. I got the bicycle on a garage sale for a price of two cups of coffee.

The crankset began to creak.

Can I get a grease on it without disassembling the crank set?

I tried leaving the bike laying on a side and pouring WD-40 on the side of crankset. It helped for some time, because it's fluid enough, but WD-40 is not a proper grease; it needs to be reapplied once in few days, and then it makes it worse because it also acted as a solvent for the original grease.

Maybe there's a grease I can heat up to about 80°C to make it fluid enough to get into the crankset and curdle inside?

I don't have access to special the tools like crank arm remover, or whatever else could be needed. I only have generic wrenches, screwdrivers and hexdrivers.

I would highly appreciate NOT receiving these answers/comments:

Given the parameters of the question...

The goal is to get a better lubricant than WD-40 into the bottom bracket.

Heating grease changes it's characteristics. My thought is I'd rather use motor oil than heated grease.

Keep your eye out for a different two-cups-of-coffee bike from a garage sale.

I'm going to offer the contrary answer - why not fix it properly?

Summary: Your spindle/crank interface is damaged, so the crank has been forced onto the spindle and is now at a high state of torque. Its confirmed that the spindle is damaged and likely that the crank arm is now damaged as a result. And the rest of the bike is OK.

So the worst case is that your BB needs replacing, and that the crank arm is damaged enough to need replacing too.

Replacing the BB with a nice new cartridge will give you a new spindle/axle, and it will give you a much better pedal feel. You will have to match the new spindle to your crank's interface, being square taper or octalink or whatever. 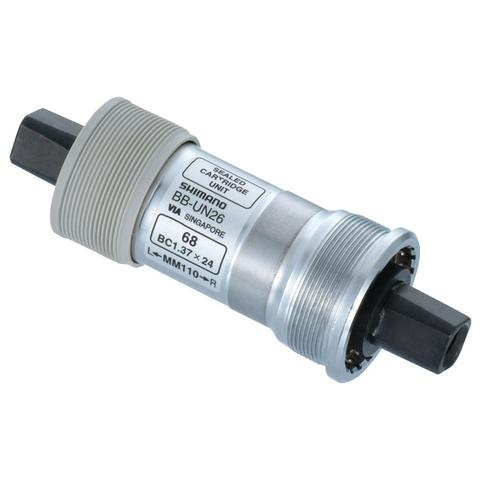 You won't know if the crank's a writeoff till you get it off. So pick a time when you don't need the bike for a bit and can work on it.

Consider that had you changed the BB for a new cartridge, the crank arm would have gone on easier and not been damaged. By cramming it back together, you've made your problem worse. Do it right sooner, not postpone till later.

Just cos the bike had an initial cost to you of 2x coffees, doesn't mean its junk. You could look for another donor bike to salvage some cranks, or check Ebay/craigslist/gumtree/etc.

Note that your left and right crank don't need to match, they just need the same fittings and same overall length.

As for getting the current one off - leverage will help. If the bolt shears then the stub will be in the BB spindle/axle which is trash anyway, and the new one will come with replacement bolts.

You don't need a LBS for this - its dirty but its not hard. The only tool that will be odd is the fitting for the ends of the cartridge.

i spray garage door lube thru the small drain hole at the bottom of the crank with the bike upside down, works fine

It seems that you have already done your homework and know why you don't want to fix things properly or why WD-40 doesn't really work. But you had to ask, didn't you.

Not the answer you're looking for? Browse other questions tagged crankset bottom-bracket grease or ask your own question.