Front derailleur hard to move due to gear cable angle

To avoid chain rub on the inside of my derailleur when in the smallest chainring and in the biggest cog on the cassette I've turned the L-screw out / counter clockwise. Now the rub is gone but due to the angle the cable is pulling the front derailleur it is nearly impossible to get into the largest chainring.

Turning the L-screw in a bit more pivots the derailleur into a more horizontal position so that the force of the pulling gear cable is no longer towards the derailleur's center of rotation and thus can actually move the derailleur.

To fix this I'd probably need to either get the cable to pull from a position closer to A or at least to somehow generate some force towards A.

The other solution would be to turn the L-screw in again and avoid the chain rub in a different way.

How do I do that?

The green line is the gear cable. 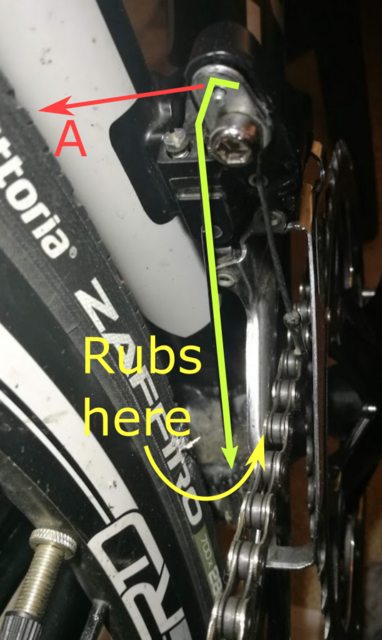 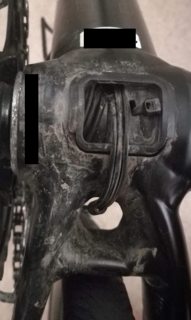 Having looked through the manual it seems that your shifter cable emerges from the frame on the right hand side of the bike, so the converter should be installed with the pin to the left, which should result in an acceptable angle between the shifter cable and derailleur lever.

I'd definitely rule out all other possibilities that might result in excessive effort required at the shift lever. Detach the cable from the derailleur, put some tension on it (may need to grip it with pliers), actuate the shifter and make sure the cable runs freely. Check the cable run from the shifter to the derailleur make sure there are no snags, housing is properly inserted into stops on the frame etc. You may even want to remove the cable and clean and lube it.

The derailleur was slightly misaligned as Argenti Apparatus had suggested.

To reduce the toe out of this particular braze-on derailleur screw out the support bolt (Bolt C on page 11, 2mm allen key) and re-adjust the derailleur on its mount. 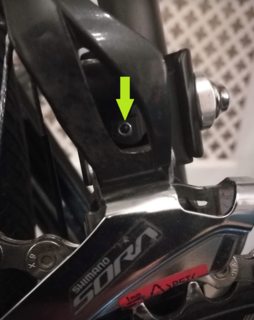 I was then able to screw in the L-screw again and thust he cable-pull-angle was improved. Now shifiting to the big chainring is working fine again.

To reproduce you may need to decrease the gear cable tension to allow the derailleur to move away from the chainring towards the frame.

Not the answer you're looking for? Browse other questions tagged shimano chainring derailleur-front or ask your own question.