I wrecked my bike 7 years ago, in a bad crash. I rode home in shock. I went through a lot.

I replaced the tires, tubes, wheels and brakes. The forks are bent and at higher speeds there is some weird vibration in the front end at times. The forks have a springy twist rarely. How do I find, and how do I judge, what is a safe replacement.?

I'm poor and this bike has sentimental value.

I've worked on two bikes with crash damage, and helped bring them back to rideable.

Please post some clear and well-lit pictures of your bike. We also need to know how the crash happened - was it a straight head on or a side impact?

I'd start by removing the fork from the frame. You'll need to pop the quill stem out first but will not need to strip the bars, (yet). Note all the ball bearings in the headset are possibly loose so anticipate they will drop. They may be in a retainer, but don't count on it. Remove the front brake caliper and any mudguard too.

Clean the fork with hot soapy water and scrub off any oil and dirt. When dried, example it closely for cracks or damage.

Get a straight edge, like a steel ruler, and check that the steerer tube is straight in all directions. Eyeball down the steerer tube and the two tines should not go backward at all, not in the slightest. They may be straight down for the upper part of the run, but never ever backward.

Take your bare fork to somewhere with a very flat and level surface. The kitchen benchtop is a good candidate, but do cover the bench in newspaper or similar. Lay the fork on the bench so the dropouts are down and it rises up in the middle, then the steerer end is on the bench too. Use that steel ruler to accurately measure how high it is off the bench. They should be equal measurements on both sides.

You can also put your steel rule vertically between fork and bench. It should touch the fork at the same place on both tines, and be at 90 degrees to the steerer. This is more of an optical test than a measured test.

why? If the fork is damaged and twisted, it will show up here. Fork damage really should be a replacement with an un-crashed fork.

A serious head on crash will often make the front tyre touch the underside of the down tube, leaving rubber witness marks.

Often the wheel will survive a serious frontal impact that distorts the fork or frame. So for you to have already needed a replacement wheel suggests it was a heck of a crash, or possibly more forces were exerted than straight-on, or it was a cheap/weak/worn wheel to start with.

More briefly now, cos I suspect your fork is knackered. Bur for completeness.

Here's a (newer) bike that's been in a crash, and the frame is severely bent in the two places suggested (plus a third just forward of the seat cluster!) Steel bikes will rust here after frontal crash damage. 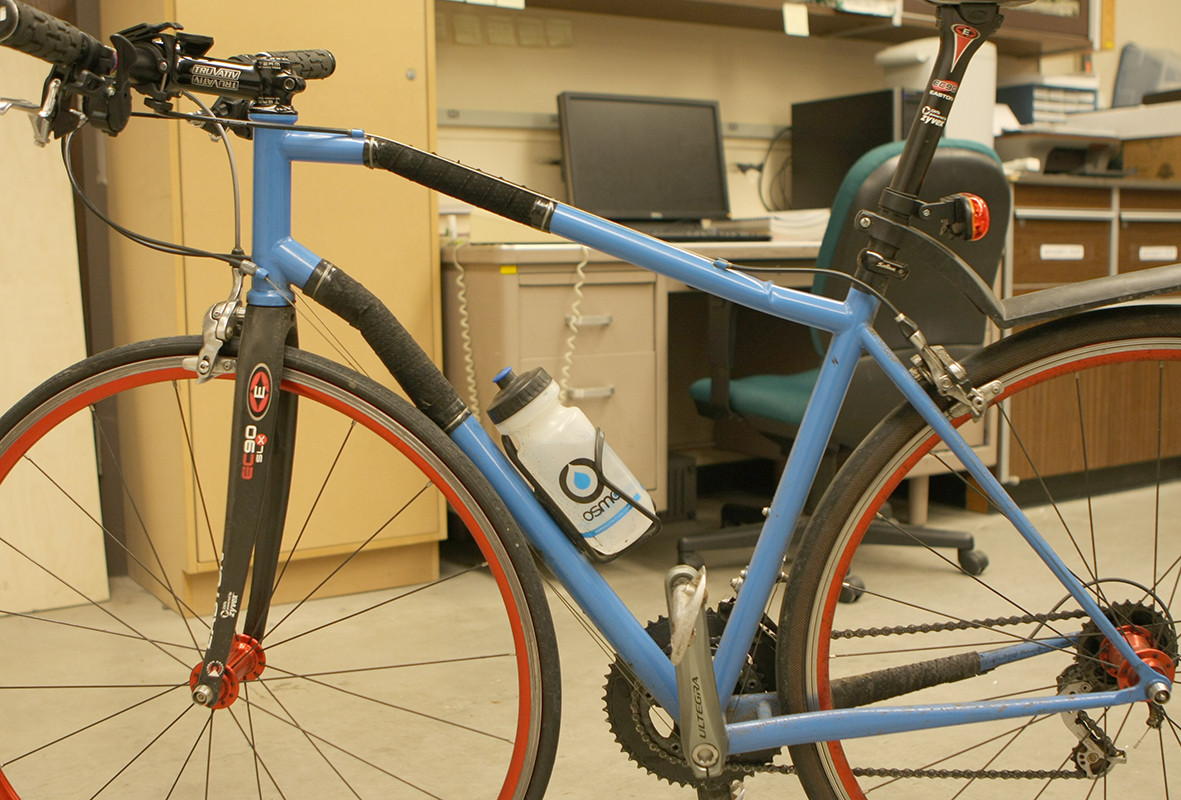 You want to measure left and right displacements all over the frame - you're looking for what's not even.

That last picture came from https://www.sheldonbrown.com/steel-frame-repair.html and there's a far better writeup there of stuff to explore. So go read that site too.

So my last chunk will be about why you should consider shelving the bike.

Bikes are cheap - Be in the right place and time and you can score a nice used bike for low cost, or a kerb freebie for nothing. Consider salvaging all the good parts off your Raleigh and then hang the old frame up as wall art.

Personal story - I rode a 1981 Raleigh Arena for a couple years, and it was a learning experience. I repaired seat stay damage and rode it for 3,440 km. However it was always twitchy at speed, and downhills were limited to about 55 km/h. I changed to a slightly deeper-section wheel and then it got Utterly Terrifying, where downhills generated oscillations in the rear at about 35 km/h. I could even generate the same on a flat road with a good tailwind. In the end I bought a used Cannondale frame+fork and moved all the components over. Everything transferred fine and I've now got 800 KM on that. The old Raleigh is in the shed, waiting to be hung in a mancave someday. 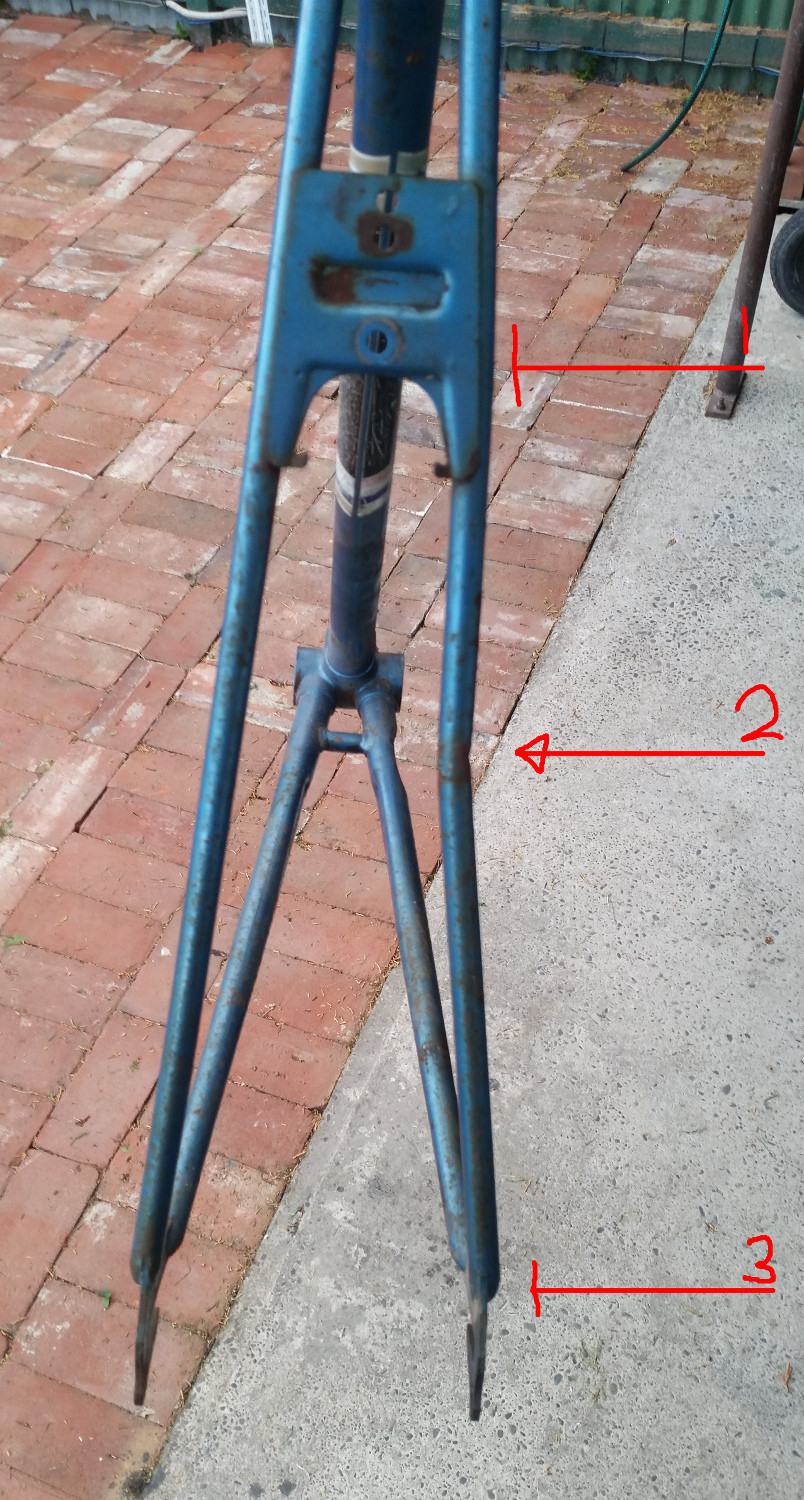 More photos of that bike at https://criggie.org.nz/pictures/?gallery=bikes/raleigh_arena

I get the sentimental nature of the bike too - its easy to get attached to Ol'Faithful. But consider it a retirement, not an abandonment.

Not the answer you're looking for? Browse other questions tagged fork compatibility vintage replacement crash or ask your own question.

7
Bending back a bent head tube - is it worth trying?