How to create a bicycle that rolls backwards when you pedal forward?

This may seem like a crazy question, but I am currently trying to design a kinetic machine where pilots are facing away from the direction of motion, adding whimsy and curiosity. As someone who doesn’t have a lot of experience with redesigning bicycles, I am struggling with coming up with a functional design where the gears of the bicycle could still be changed. The first idea I had was to arrange the chain in a figure eight shape, making the back wheel of the bike turn backwards while still pedalling forward. Although I haven’t prototyped this design, something tells me that having the chain cross like that would create too much resistance to reliably change gears. Another idea is to add an extra gear between the pedals and the chain, changing the direction the chain is going entirely. However, I’m not sure if the size of said gear would interfere with gear ratios on the bike? If anyone is interested in helping me out, I would greatly appreciate it!

I refer to a bike throughout, though I suspect you're actually going for something with more than two wheels, and likely more than one rider.

Multi speed bike gear systems generally can't be driven backwards. This means that if you really want gears, the chain that drives the rear cassette or hub gears must move forwards. Fixed gears are designed to be driven backwards for braking.

You could easily choose to go for fixed gears on a machine like this, in which case your figure of eight chain would work, but you'd want a chain tensioner with guides in the slack side, so the chain doesn't touch itself at the cross.

If you really want a range of gears the best thing would probably be to install a geared hub the wrong way round. This would need a left side chain, but you should be able to achieve that with tandem or BMX components (tandem parts are more likely to be compatible with other types of bike).

This approach would leave the bike as effectively a front wheel drive, rear steer machine, which would be very unstable. You might be better off driving the bike as normal (rear wheel drive, front steering) and turning the rider round. This would be (conceptually) as simple as clamping a saddle onto the top tube and putting your figure of eight chain in place as above, but would work with normal derailleur gears as the chain would be pulling correctly. A single chainring and a couple of idler sprockets with guides would be a good idea to maintain reasonable angles in the vertical plane.

For a little inspiration you might want to read up on the retro direct drive. This had one gear ratio pedalling normally and another driven (still forwards) by back pedalling, and the bike could still freewheel fowards.

Your point about intermediate gears is easily dealt with by making both gears on any intermediate axle the same size.

Taking a hint from some recumbents that have weird gearing, you could get a couple of plastic tubes, run the chain through them, then twist one against the other, so that the chain is in a figure 8, similar to what you suggested. You'd need a long chainline, and probably fixed gears vs derailers.

Going with some recumbent designs, have your drive train as usual with a bike but instead of driving a wheel you drive a cogwheel, from which you can drive your wheel or whatever you used to drive your 'bike'.

Do you know about the Human Powered Vehicle Association?
http://www.whpva.org/hpv.html
They have many more vehicles than I did see in the site. Some of them are back to back tandem recumbent cycles, where one of the riders sits back to the drive direction. For those they have to worked out how to switch the direction of leg movements compared to direction of travel.
(Link to a drawing of one of those tandems.)

Stage one is to be comfortable with welding and fabbing parts. You're going to have to make some stuff, it won't be available retail. 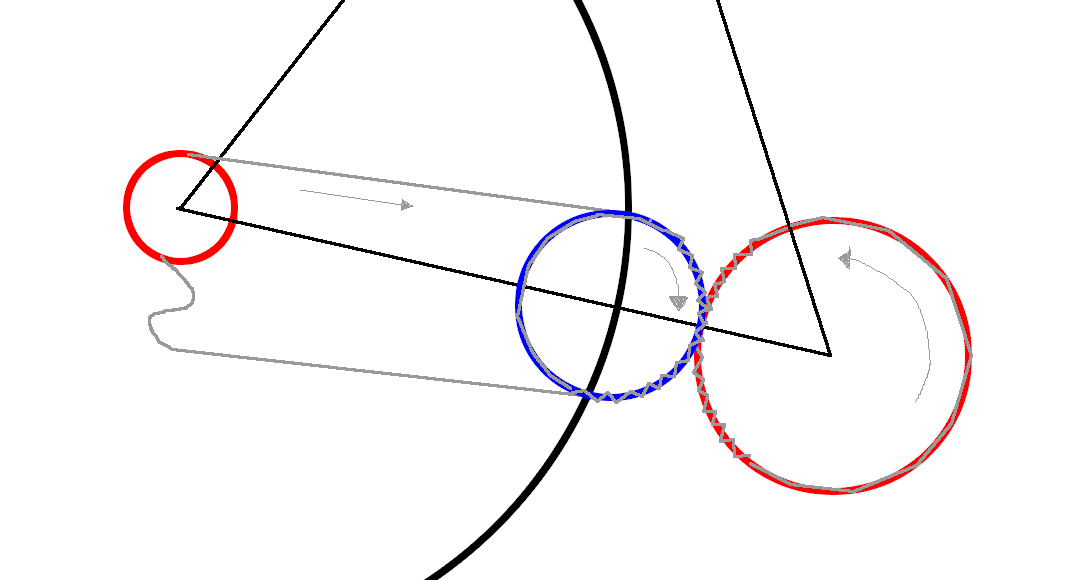 Normal bike viewed from Right-hand side.

Replace the chainrings with a single cog, cut with involute teeth, but leave the bottom bracket in the same place. This lets you use normal cranks and bearings.

The blue is a new cog that meshes with the chainring-cog. This will reverse the rotation. Mount it on a short jackshaft, you'll need a stout chainstay and a way to connect the axle housing. It could work just as well to mount the new axle to the seat tube instead, though the chain's path would be different.

Attached to the blue secondary is one of your chainrings salvaged from the front. This will drive the chain like normal. Just stick to a 1-by single here for simplicity.

The back end of the bike would be normal - with a standard wheel, cassette and derailleur. Though to be honest a derailleur might be worth deleting completely and run a single speed setup.

Once you've got that engineered and working... flip it, all. Turn the BB over so the cranks are on the left side of the bike. Move the jackshaft to the left side. Flip the rear wheel, do away with the derailleur.

Since the wheel is now reversed, the pawls inside the freehub will only lock up for reverse travel. 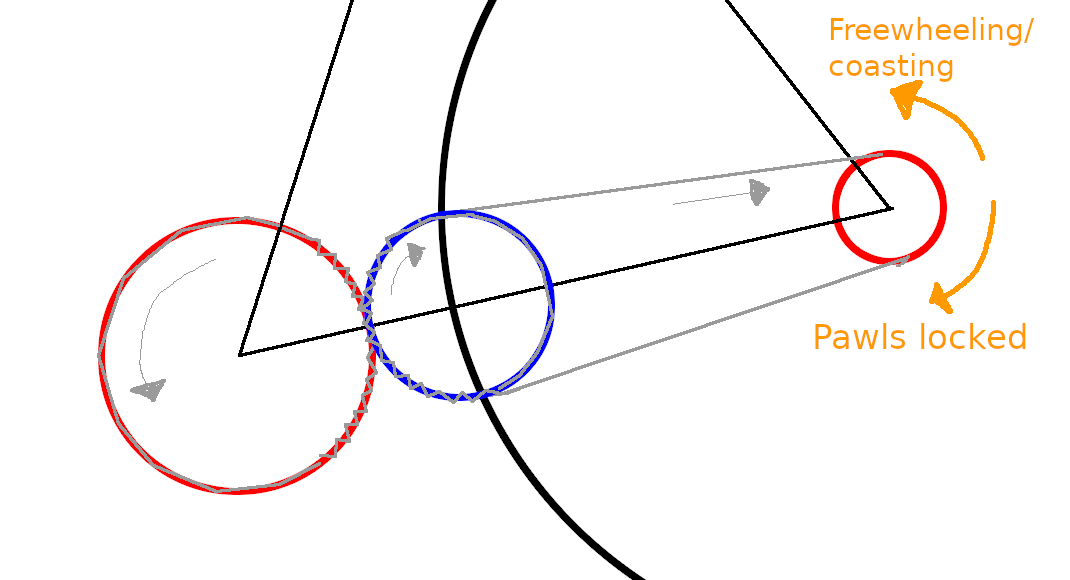 Flippo bike viewed from Left-hand side.

At this point, you have a bike that will go BACKWARD when you pedal FORWARD which is what you asked for.

Notes it will be SUPER hard to ride backward, to the point everyone will fall off immediately, possibly injuring themselves. So instead of doing this with a two-wheeled bicycle, consider a tricycle with three wheels as a better platform for working on.

The two cogs have no lubrication on their involute gear faces. I'd suggest you explore an engineering plastic to see if its self-lubricating properties can resolve that. Or look at some kind of brush/dropper oiler.

Many bike frames are biased toward having the chain on the normal right-hand side. You may have to get creative to mount things reversed.

I'd suggest using an old-school cup and cone bottom bracket, so the axle can be reversed while leaving the threadded cups in place and you don't have to remake the threads. Downside here is that the threads are "open" and could back themselves out. Some thread locker is an excellent idea, and I'd go further with a couple of tack welds or drilling holes for some kind of locking pins.

Give up on the derailleur - it just won't work well.

Also look at tandems - many of them have a timing chain on the left hand side of the bike, so the bottom brackets are already ready for that.

Hub gears in the rear hub have non-equal rotation on the rear sprocket and the rear hub shell. If you have the capability to design hub gears, I don't think it would be very hard to design a "singlespeed hub gear" system that has one gear which rotates the rear hub and the sprocket by equal amounts in opposite directions.

Of course this is something that if you not only design it but want to manufacture it, it starts to be more complex. For example, Brompton makes 45000 bikes per year and had trouble with Sturmey-Archer ending production of their gear hub (they restarted production in a foreign country later so fortunately Brompton was saved). If even that number of bikes per year doesn't assure continuous production of the hub gear parts, if your goal is to build exactly one of these bikes, no hub gear manufacturer is interested to make the gear hub.

Not the answer you're looking for? Browse other questions tagged chain gears shifter or ask your own question.

11
How to fix new chain that switches gears when pedaling backwards
9
Problem with chain skipping without trying to shift (even with new chain and gears)
5
My chain appears to be squeaking when I ride it forward but not backwards
5
Can I pedal my bicycle backwards to move it backwards?
2
Chain skipping with new chain and freewheel
0
How to fix gears on a Kilimanjaro bike
0
Triple chainring + nonstandard sloped cogset. Can this work?
6
My chain is catching on a part for which I don't even know the name
2
Are rear derailleur cable intervals equal?
0
Reinstall a Shimano nexus 7 wheel after puncture?