How can I troubleshoot battery issues on an electric bike?

When I turn the motor on (on the handlebar "computer"), the battery indicator tells me the battery is empty. However, when I test the battery using a voltmeter it says 37.3V. 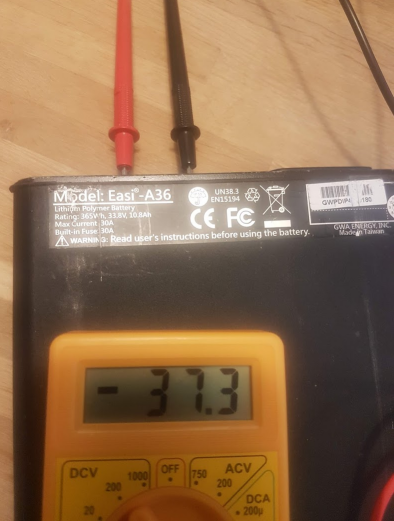 I could buy a new battery, but that's 570 USD - and possibly only to find out that the battery works fine.

As far as I can see, there are three "main" components involved :

How can I best troubleshoot a battery and / or motor on an electric bike to find out what's wrong?

Its likely a mismatch between the computer and battery pack. 33.8V is not a common voltage for E-Bike Lithium. 36V is more typical. The nominal voltage of the battery is probably 36V based on the model number. It is possible a cell in the battery pack has failed,but form the specs you have given I don't think this is likely.

Batteries are made from cells - lithium batteries are nominally 3.6 or 3.7V/Cell. A 36V battery will have 10 cells, at full charge voltage will be around 41-42V and fully discharged around 32V (the last 10% causes the bulk of the volatge drop). A nominal 33.8V battery will have 9 cells, with a full charge voltage of around 37-38V and a full discharged voltage under 30V.

If the computer is using battery voltage to determine State of charge, it will think your battery is flat when it is charged.

To confirm this diagnosis, you will need to find out the number of cells in the battery, and the details of the bike computer. Also form fully charged (ignoring the bike computer) haw far can you ride before the engine cuts out? If you going a reasonable distance, close to expected, then its just mismatch. If you going a short distance, then either the battery if faulty or there is a mismatch and the computer thinks the battery is flat so shuts down the motor.

You're kinda stuck. Assuming that the battery is the one speced for the motor & controller, is could be any of the three. (And remember, too, that there's often a controller of sorts embedded in the battery.)

First, I'd dig through the available documentation and see if you can't find some info on diagnosis. It may be, eg, that you can plug in a computer and read out some status.

Failing that, I'd try to figure out a way to measure the voltage of the battery under load -- while it's plugged in and you're attempting to operate it.

(And note that the battery has a built-in fuse. There may be some way to replace it.)

(Another thought: In the US I'd take the battery to a battery store such as "Batteries Plus". Their personnel often have the skill and training to check such batteries properly.)

Not the answer you're looking for? Browse other questions tagged electric-bike battery or ask your own question.

3
How to convert a commuter CX bike to an Electric bike?
3
Kalkhoff Agattu (e-bike) Panasonic 24v engine dead - worth repairing?
0
Has anyone tried this “poor mans” homemade electric bike idea?
3
Bicycle computers with nonvolatile memory
2
Need help debugging ebike: Laggy motor / inconsistent behavior
2
Ancheer electric mountain bike cuts out under load
5
E-Bikes - Is it bad for the bike to run out of battery?
4
What does error code 30 signal on a Bafang electric unit?