As I've mentioned elsewhere I recently had quite a bad crash - broken collarbone, shoulderblade, and a rib. The circumstances are rather unusual: both brakes failed totally.

Crash details for those that want to know (TL;DR: I'd been using both heavily, let them off, they didn't come back on):

I was descending a mountain pass, as I often do, taking it rather slowly as the light was fading and the road was damp with some loose material. My habit when picking my way down that sort of road is to use the back brake lightly and continuously to control speed, and use the front brake for significant slowing before bends. Coming out of a bend I released both brakes as the next 100--200 m was straight and not too steep. When I was fast enough, I squeezed the brakes but carried on accelerating. I spent a few seconds trying to slow down, braking hard while rolling over the strip of grass up the middle of the road in the hopes of losing some speed, but knew I couldn't make the next bend, let alone the next few km of unbroken descent, so I headed for the grass off to one side to lose speed/hit something softer. I did manage to drop from around 35 km/h to more like 25 km/h but hit a rock with my front wheel and another with my body (and the aerobars with my helmet, hard enough to bend the aluminium armrest). Just before I crashed the brake started squealing, and the ceramic pads are normally silent.

The ride on Strava shows that only 20km earlier I'd had enough of a descent to put the brakes through their paces; at the top of the big descent I tightened the barrel adjusters and fixed pads a little as there was more slack than I would have liked -- and I tested them. A few days post crash the brakes stop the bike while it's being pushed, but the front wheel isn't rideable to test.

My bike has done about 16000 km and I recently had it serviced, including new brake pads. They're ceramic (I usually use metal), and normally have plenty of stopping power though I've had to tweak them a few times in the 1000 km since they were fitted -- new cables settling in? The brakes are Promax Render-R cable discs (BB5-style pads) and are normally good, barring one case of contamination.

I haven't taken the back wheel off but the front came off to get it home and I took the chance to inspect the pads: 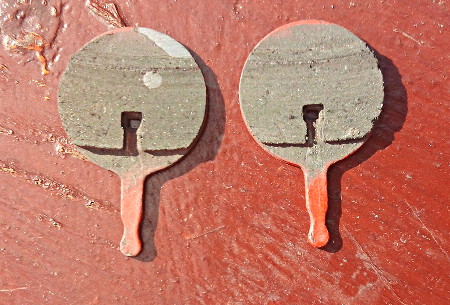 The wear on the moving pad is strange. The pale patches are shiny metal backing and the actual pad is worn into a wedge shape. Update: I've measured the pad diameter, it comes in about 0.1 mm bigger than an old set of metal pads I had lying around, and the rotors are perfectly flat.

Further update: There are possible signs of melted material at the back, in the rotor air holes and the edges of the pad, and the pads turn out to be 70% ceramic (and 30% organic I assume). The front rotor has a groove worn into it to match the pads shown above, and has worn more in the month/~1000 km since these pads were fitted than in the previous 6 months since it was new. The rear rotor has also taken a lot of wear recently.

I'm as sure as I can be that I wasn't skidding the back - I was steering normally, not fishtailing. I didn't notice a different feeling in the levers, but I had bigger problems on my mind.

What could have happened? Could they really jam in the off position, perhaps due to heat? With one specific set of pads? I'm happy to replace the brake mechanisms when I can ride again, but want to understand the cause.

This is purely a hypothesis

Firstly, i'm going to work under the assumption that the pads are either organic, or some sort of organic/ceramic hybrid compound. I can't actually find pure ceramic BB5 pads for sale in the UK (which is where the OP lives). And anything I can find with a red backing plate is organic.

Making the above assumption, I think its likely the rear brake was either cooked, or completely worn down by dragging the brake. Organic pads are great for stopping, but can wear out very quickly. This, combined with the fact that a rear brake will have very little effect on a steep(>10%) downhill would explain the sensations of no braking from the rear.

At the front, the wear pattern on the moving pad suggests some serious issue. I think its possible the moving pad was not securely held by the retaining clip and was in fact moving within the caliper. The wear pattern shows that only half the pad was in contact with the rotor, and significant contact has been made with an area with no pad material. If this was the case, then its also possible there was not enough force available to push the rotor into the non-moving pad. Hence a complete failure of the front brake.

Since recovering from my crash, I've put a bit more thought into this. I replaced the calipers, rotors and pads, with Avid BB5s - so very similar to the Promax ones that were essentially copies of the same design. The Avid ones make it slightly easier to tweak the fixed pad, and this turns out to be a good thing.

Fixed pad wear makes other issues worse: One thing I've since noticed with BB5-style brakes is that they're quite sensitive to the fixed pad position, and therefore to fixed pad and rotor wear. This makes other issues worse, and unlike getting them filthy, gets worse the more you brake. Riding in mucky conditions it's important to check and set the fixed pad clearance fairly close periodically. This certainly wasn't the only cause of my crash, as seen from the melted material in the rear rotor, but I think it goes some way towards explaining the uneven moving pad and rotor wear at the front. On brake with only one moving pad, the rotor is bent to contact the fixed pad. If the fixed pad and/or rotor (in my case, certainly both) are worn excessively, the necessary bend increases, meaning two things: more of your braking effort goes into bending steel; the contact between the moving pad and the rotor is concentrated nearer the axle, producing the uneven wear in the photo above. With slow wear this should be a small effect as the pad will take on a small taper, but if things wear too fast (or you somehow back the fixed pad off instead of driving it further in) this either won't happen fast enough, or it will wear down to the backing.

On the Promax brakes, adjusting the fixed pad with the wheel in was tricky - there was a knurled plastic part to turn by hand but the adjustment was too stiff (so I was used to thinking the adjustment had bottomed out when it hadn't), meaning using a less than ideal screw in an awkward place. The BB5s adjust in the same way but nicer. I'd checked and tightened earlier in the day, in daylight, but everything was wearing so fast (though I didn't know it) that I gave the fixed pads another tweak not long before the problematic descent, this time in the dark. At the front it still wasn't enough.

I believe this could have happened due to brakes overheating.

I am fairly certain that by continuously dragging the rear brakes you could have overheated them. You should investigate the rear brake pads for extensive wear. If you find this prediction correct, it's likely the front brakes suffered a similar fate.

It is more difficult to say what exactly happened to the front brakes. The moving front pad being worn into a wedge shape right down to the metal is suspicious.

It could be that in-between the braking, the moving brake pad did not stop touching the disc. Leading edge of the pad could have been pulled in by the friction with the disc. Maybe the brake callipers went out of alignment and started rubbing the disc.

Another possibility might be disc warp due to heat. Then a warped disc would produce even more heat until total failure.

Late reply but I'd like to add another theory to this problem.

Mechanical brake (as I understand that this issue is about) needs constant adjustment. The fixed pad needs to be adjusted very close to the brake disk in order to give the moving pad support for applying pressure to the brake disc. Example of adjusting the fixed brake pad of a mechanical Promax brake can be found on YouTube, here is an example:

My guess is that the fixed pad was set too far away from the brake disc, and then the moving brake pad was worn out prematurely?

Not the answer you're looking for? Browse other questions tagged disc-brake crash or ask your own question.

8
Are my pads worn down?
7
Heating of hydraulic oil with hardtail electric MTB brakes
8
While on a ride, realised rear disc rotor was contaminated, what could I have done?
4
Tire blowout on long descent
0
Mechanical disc brake caliper round pads 23 mm diameter

4
Disc brake pads are loose in the calipers, is this a problem?
8
Grinding sound on new disc brakes
2
Removing and reseating front wheel makes disc brakes rub
7
Issue replacing Avid BB7 disc brake pads
3
Are my cable disc brakes knackered?
8
While on a ride, realised rear disc rotor was contaminated, what could I have done?
1
Disk brakes don't work well after taking out pads and putting them back
5
Cause of severe brake judder?
1
Disc brake keeps making ping-like shudder
0
What can cause narrow disc brake gap in TRP Spyre-C?