Why does Fox specify to fix the lever in an upright position, on a Rhythm 34 fork that uses a Through-Axle?

I vaguely remember that "conventional wisdom" states that closed QR levers on MTB forks should point towards the back of the bike (see Which direction should QR lever point? or What is the proper position for quick-release levers?). However, I just saw that Fox specifies something different from the anwers to these questions in the manual of the Rhythm 34 thru-axle fork: "The closed lever position must be between 1-20 mm in front of the fork leg.", i.e. like this: 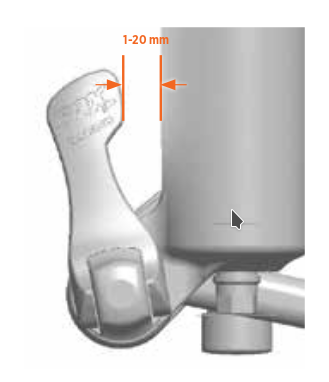 Out of curiosity: Why is this so? Would it be harmful in any way if I ride with the lever pointing backwards instead of upwards?

Generally I'd put a QR lever at an angle close-to a frame tube but absolutely not touching the frame.

The main purpose is to stop the QR lever being opened or loosened by any sort of foreign object. That may be another rider's wheel/tyre, a stick or road rubbish kicked up and catching wrong, or even a lucky catch on live foliage.

One difference is that's all about QR levers for QR skewers, where one flip of the lever leaves the skewer quite loose and retained just by gravity and lawyer lips.

Your quote is about a through-axle / thru-axle, where flipping the lever generally does not start any sort of disengagement. Instead you have to unscrew the axle with that lever. So in theory the lever could be closed or open without issue other than marring your paintwork or possibly catching on grass or maybe spokes (unlikely).

As long as the QR or TA lever isn't being rotated, and was closed to the correct torque, then the lever could be at any angle provided it doesn't rub or catch.

One later thought - the recommended distances could be about east of un-doing the lever. I remember having to use an extra lever on a super-tight QR that was fitted to fork dropouts through a bare hub, ie without a wheel built on the buh. If OP's TA lever was pointing forward or backward, the rider may be tempted to push on spokes or on the nearest piece of rim.

Most likely the manual writing team knew they had to specify a 'safe' QR position so the company would be covered legally. In consultations with the engineering and legal team they decided that in front of the fork leg was the safest position, or at least the position that a company lawyer could defend as the safest position in the case of a lawsuit.

Some QR levers won't close all the way if they are impeded by the frame/fork. My guess is that is the reason for this particular lever.

Not the answer you're looking for? Browse other questions tagged fork through-axle fox or ask your own question.

8
What is the proper position for quick-release levers?
6
Which direction should QR lever point?

11
Why does RockShox say you shouldn't use a bolt on axle on their fork?
0
Can I fix or replace the quick release lever on my thru axle?