Can I use a Tubular tyre in a Clincher rim?

Just tried it - my trekking clincher rim was too deep, so have to use 4 layers of tape to keep side out of rim, but then tubular started to travel forward even during slow acceleration.

Would you try to use glue on all 4 layers + tubular, some special tape or change rim ?

No surprise seller told me it is possible...

Would you try to use glue on all 4 layers + tubular, some special tape or change rim ?

The more layers of tape and glue you introduce the less firm the tire is attached and the more weight you add to your wheel. You want your tire firmly affixed to your rim for turning, braking, acceleration (on a rear wheel) performance.

No surprise seller told me it is possible...

Sellers say lots of things are possible.
Possible does not mean "safe", "performs well", "is recommended", "is best" etc.
Sometimes sellers do not have your best interests at heart.

It is also possible to use and angle grinder to cut down the walls of the rim. Then you would need less tape. Please don't do that. But, if you do we'd like video.

I'm linking two arbitrarily selected images of clincher rim and tubular rim profiles. The first one is from m2endurance.com. Your clincher rim has little hooks on the edge of the rim. Those grip the beads on the side of your tire.

This image is from sdeals.com, and this is what a tubular rim looks like in profile.

Tubular rims have a curved gluing surface. Tubular tires are round. You glue the bottom side of the tires to that curved surface. If you don't glue them securely, they can roll off, and you will crash. You mentioned tape, and maybe you were using tubular tapes. Same principle, tubular tape will adhere to the curved surface.

I'm not sure what you did exactly. If you put four layers of tubular tape on top of each other, then the tape is only glued to the base of the clincher rim, where a tube would normally sit. I don't trust the bottom layer of tape to adhere sufficiently to the clincher rim's surface. It is likely sticking to a smaller surface area than it would on a proper tubular rim. I'm not that sure how well tubular tape adheres to other tubular tape.

Whatever the case, everyone is expressing alarm because tubular tires, glues, and tapes are not designed to work with clincher rims. There is no way to get sufficient adhesion. If you ride that, you will crash. The seller was completely irresponsible, or perhaps their English is really poor and they had no idea what you were asking.

Edit:in the interest of completeness, there is one tire, Tufo's tubeless clincher, that's a tubular tire with bead blocks that fit into clincher rims' channels. These tires are mounted without glue. I've heard that they don't ride very nicely.

I've just spend time learning about tubulars over the last several weeks. The advantages of a tubular seem to be very slightly faster over a comparable clincher.

The downsides are a lot more preparation work, and that a flat is very bad because they take a lot of effort to fix.

So if you've got a team car right with you, which is carrying spare wheels then that's great. But for the great mass of cyclists, the minor advantages of tubulars are outweighed by the massive downsides.

A clincher and a tubular use fundamentally different interfaces with the rim and therefore are built differently. 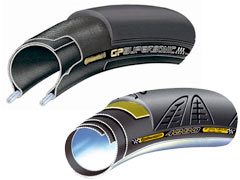 You can see the tubular is a tube that wraps a permanent inner tube. The clincher is a "bowl" that wraps 3/4 of an easily-swapped inner tube.

This is better explained in a picture:

Left is a normal clincher, middle is a normal tubular, and right is what I think you've done.

I suspect your tubular tyre has multiple layers of tubular tape trying to fill the void that is the clincher's wheel well or Valley.

You may have become confused between Rim tape and Tubular tape which are very different.

Additionally, Tubular glue is often spread in multiple layers with four on the rim and two more on the tubular. Tubular tape is used in a single layer.

Further downsides to this idea:

In short, use the right rim for the tyre you have.

Not the answer you're looking for? Browse other questions tagged tire bodges tubular or ask your own question.

28
What are the differences between “clincher” and “tubular” tires?
2
Running one wheel with clincher and one with Tubular
3
Tubular tire on hooked rim
0
How to choose MTB bike tyre: hookless, tubular or clincher?
2
What tyre widths I can use?
0
Can I run a 2.5" tyre on a 40mm rim?
7
Valve loses orthogonality in a tubular rim
5
tubular tire replacement
6
Does my rear tubular tire need to be replaced?