I bought a Trek FX Series 7.5 in April 2017 and ride every day for about an hour. Two weeks ago the crank arms suddenly gave around the bottom bracket and no longer stayed 180 degrees to eachother. I "fixed" this at first by simply tightening the screws on the crankarms. Last week the problem recurred and I took it to a bike store.

The repairman showed there was actually a spacer in the bottom bracket which broke off, which caused the BB and crankarms to wiggle side to side slightly. He put on a new spacer, gave me the bike, but today the problem recurred.

I don't have any experience repairing more serious problems like this, so I have a few questions. Given my explanation and the photos provided, can anyone guess as to what the cause of crankarms not staying 180 to eachother is? Is it indeed a broken BB?

If so, is this the type of thing that is fixed or should the component be replaced? Should more components than just the BB be replaced?

Any help is greatly appreciated. Thanks. 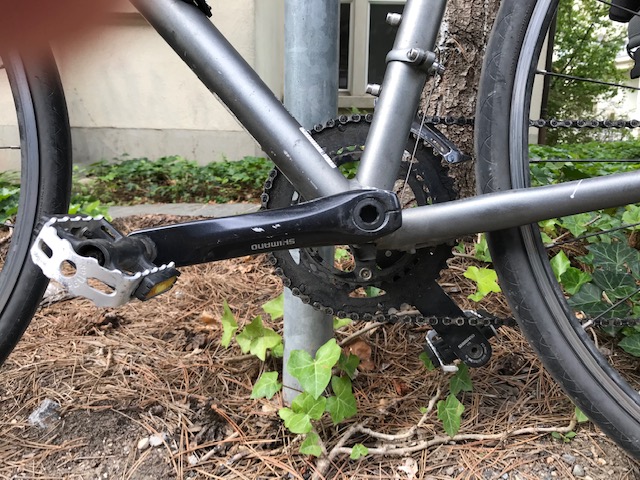 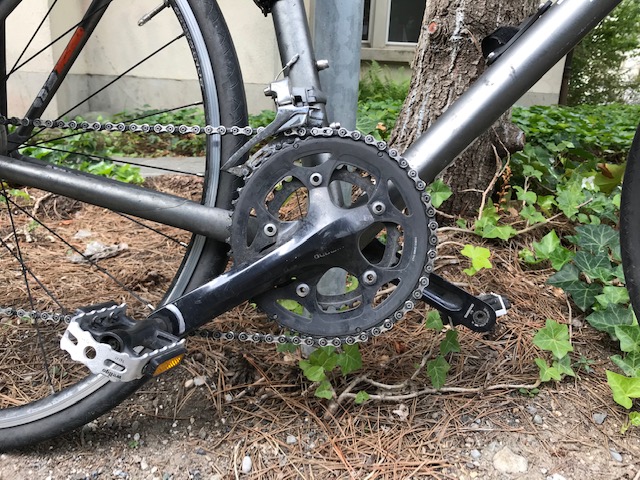 Edit: The picture below shows the problem in greater detail. The "spacer" I was referring to isn't part of the bottom bracket, but the crank arm. Also the chain ring bolt had broken/fallen off. The technician put a new chainring bolt and just screwed the crankarms on tightly. As a solution I have bought new crank arms, same model, both right and left. Thanks for the help! 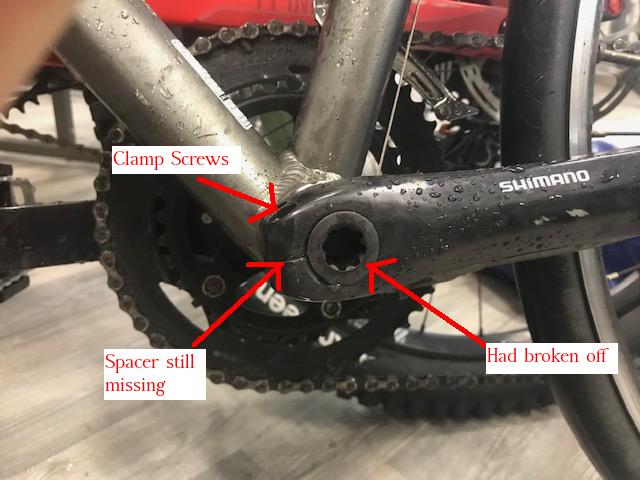 The bottom bracket is not damaged, the left hand crank arm is.

I believe the Trek FX 7s used a Shimano R460 crank, which is a lower-end, relatively inexpensive model. Any Shimano Hollowtech II road crank with matching chainring sizes and crank arm length will be a drop-in replacement.

That's a Shimano Hollowtech II crankset and bottom bracket. Your bottom bracket isn't causing that problem - that's something seriously wrong with your crankset.

The only thing I can conceive of causing that problem is the two pinch bolts on the non-drive side are loose. (your first photograph - the side without the chainrings)

There are two bolts that hold the non-drive side crank arm in place. They need to be tight.

I also suspect your crankset may be damaged to the point it needs to be replaced. The splines that hold the crank arm aligned are almost certainly badly distorted.