I was using mild braking on a very hot day, a couple miles down the hill the back tire blew out the sidewall on a Continental Ultra Sport 700x23C inflated to around 100psi. 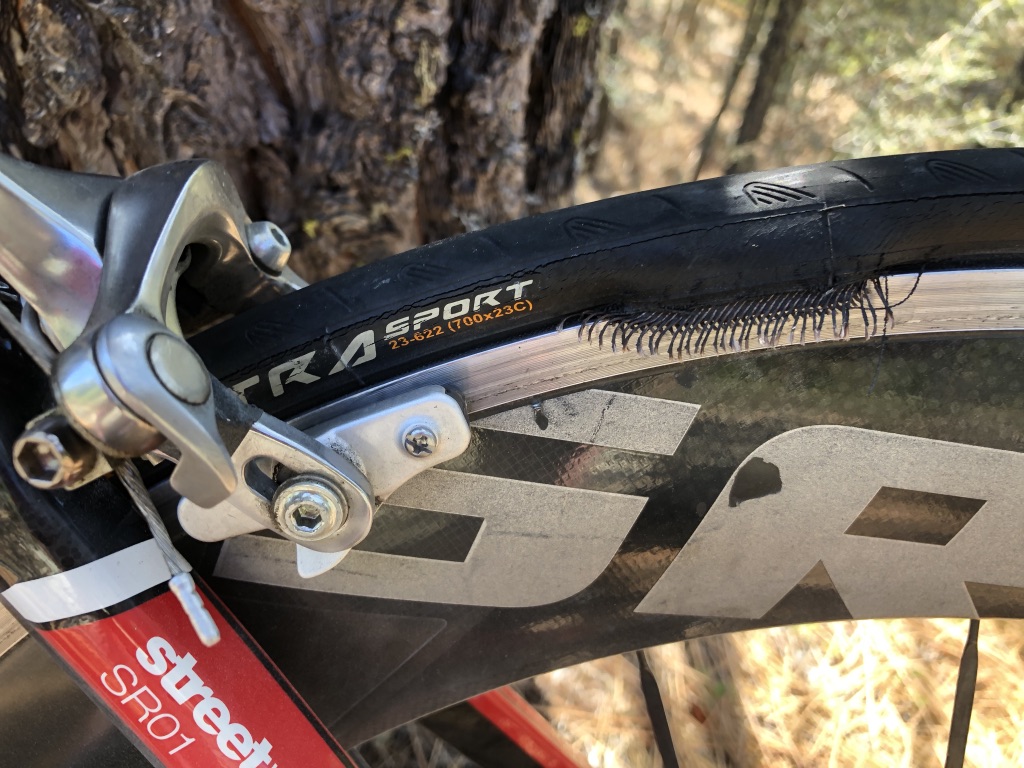 The rim was quite hot to the touch from braking. The tire is a few years old, but didn't show other obvious signs of coming apart or excessive wear.

I'm going to order a replacement tire. Are there certain tire options that would be more resistant to this? Other than that, what else can I do to avoid having to get a ride home in a car from the middle of nowhere?

Edit: added more pictures after taking tire off the rim with plastic tool: 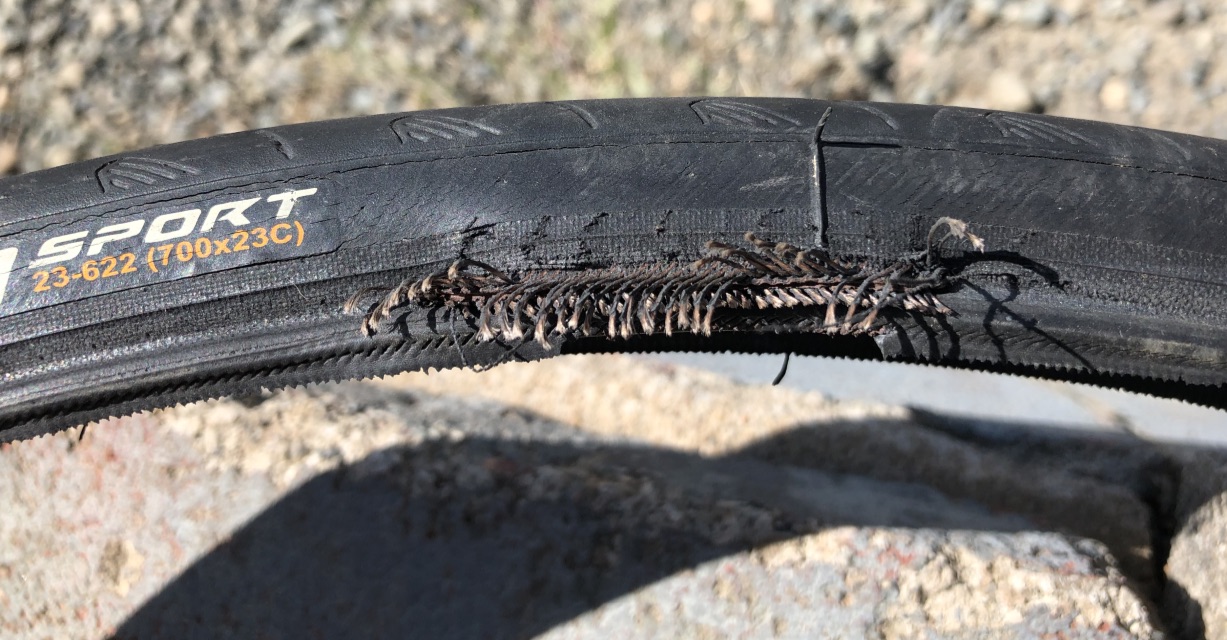 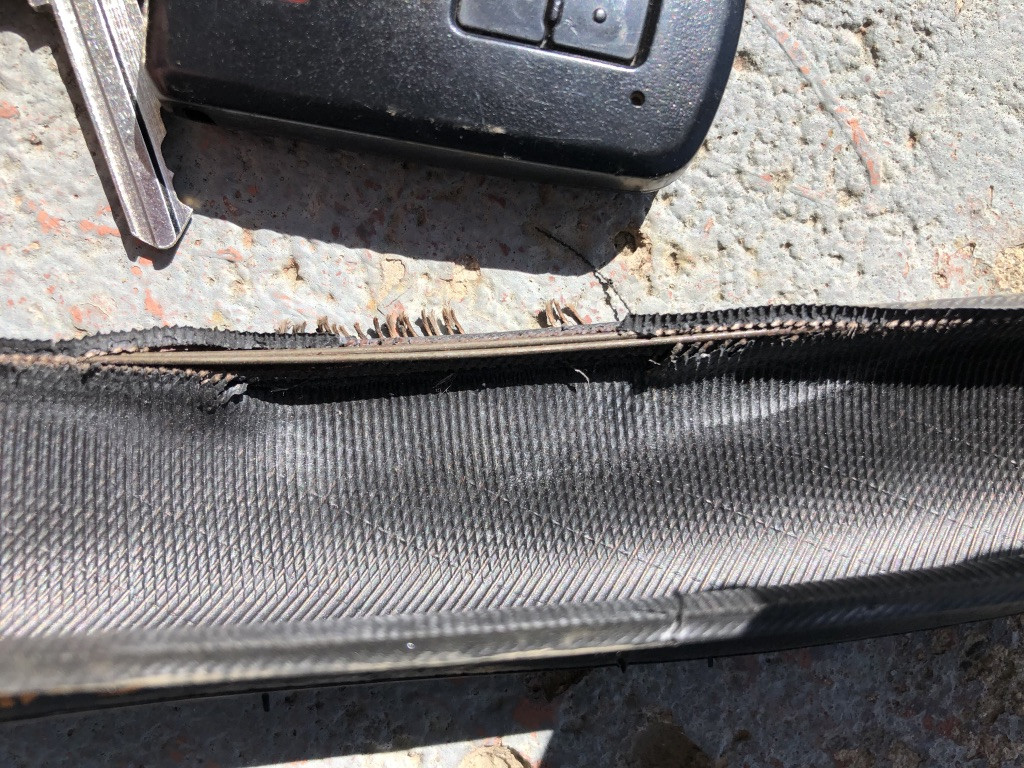 The ideal gas law PV=nRT can be used to work out the increase in pressure, as there's no room for the air to expand/escape. Let's try some numbers. If pumped to 100psi at 17°C (290K) then heated to match a metal rim hot to the touch at 57°C (330K) the pressure would get to 114psi. The tyre should be able to handle that even if rated to 100psi. Even starting at 7°C and going to 77°C only gets you 125psi. Altitude adds a tiny bit to this if you pumped up at sea level - around 5psi for a 3000m pass.

Here's a plot of pressure vs. temperature assuming you pumped your tyres up at 0°C and ignoring altitude. The upper limit of the graph is approximately when your tyres and brake pads would be smoking; you couldn't get that hot because the pads would misbehave long before that. 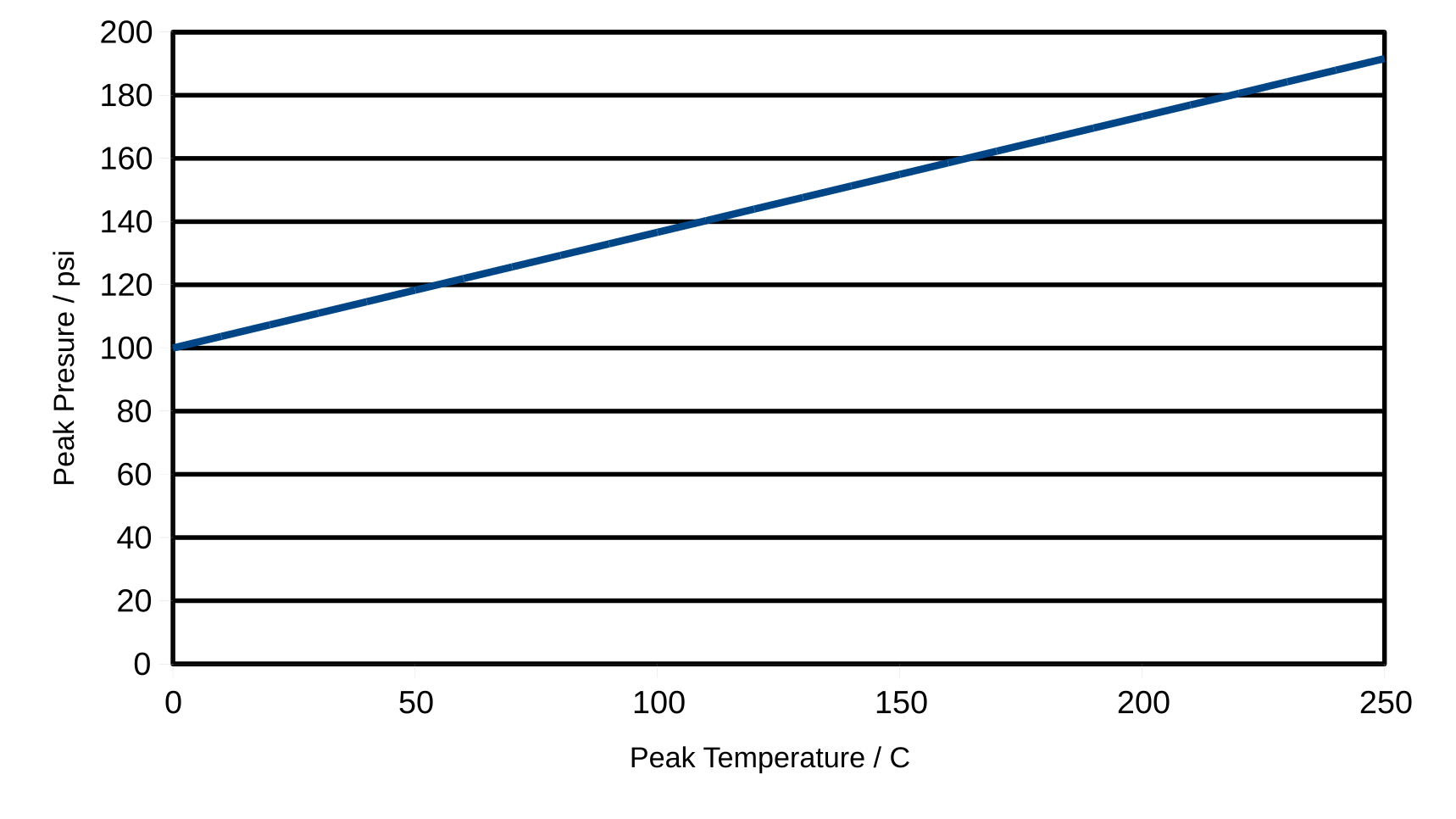 Heat also softens the rubber, making it more likely to fail, but it sounds like you should have been within sensible limits.

I've blown out a sidewall like this because of a sticking pressure gauge. A subsequent test suggested I'd put about 50% more in than I should have. If you'd overpressurised the tyre a little, then the heating could have taken it over the edge.

Maybe it's going too far for you, but randoneuring I carry a spare tyre. A boot is all very well sometimes, but I've seen a few tyres fail like this one and that won't go back together with a boot.

Long steady braking is sometimes unavoidable, but causes problems (including my own recent crash*). If you can, it's better to let the speed get up a bit then brake just before each bend or when otherwise needed. Spreading the heat between both brakes is also a good idea.

* I was on disc brakes. The resin holding the ceramic together in my rear pads melted, one of the front pads jammed in a wrong position and only engaged the rotor with one edge. This may have been due to heat as well. This all happened when I released the brakes to allow them to cool on a long steep straight descent.

Are there certain tire options that would be more resistant to this?

Your tire was appropriate to your task. Any tire of similar quality would be no more or less likely to malfunction.

It's not perfectly clear from the picture but this does not look like a tire blown off the rim from high pressure. If a tire is over inflated - or heated to over inflation the tube usually blows out below the tire bead.

The flap with threads sticking out looks like tire casing that tore out from near the middle of the tire. There is an excellent question here on Bicycle Stack Exchange concerning bike tire construction. Either the tire was defective, dry rotted or weathered to the point where the stress of a high speed descent caused the tire casing to fail.

An auto mechanic friend of mine says "Anything mechanical can fail at any time".
Some things are more likely to fail than others. Tires and tubes top the list for a bike. As Chris H suggests, carrying a spare tire and tube along with some basic tools can help.

In general Continentals have served me well. The Gatorskin models have tougher side walls, and the Hardshell version is even tougher. I'm currently riding GP5000 tubeless and ride in very hot conditions (Including Egypt) with no issues. I'm 100kg and like to descend fast (so maybe not as much braking), have never had a tire blow like this that was correctly installed and maintained. The tire in your picture does appear to have cracks in the side wall, I suggest that the tire has not aged well if it is only a few years old. This type of fatiguing can be accelerated by certain degreasers/cleaners, and prolonged exposure to sunlight (among other things). May I also suggest moving up to a 25mm tire (or even a 28mm if your frame and brakes allow) which may allow you to run slightly lower pressures, and offer benefits such as; fewer pinch flats, increased comfort, and lower rolling resistance.

Try a change to a disc brake instead of rim brake.

I suppose braking that was Too good could also lead to flat-spotting your tires.

Not the answer you're looking for? Browse other questions tagged tire damage tire-pressure or ask your own question.

8
Hydraulic disk brake stops working when hot; back to normal after cooling - is this expected?
12
Why are almost all bicycle tyres cross-ply/bias ply and not radial construction?
8
Total brake failure - trying to understand what happened

10
Tire slips off the rim when inflated to 8bar
13
Mystery flat keeps happening 3-5 times a week. Do I weigh too much for my tires?
4
When to replace a tire?
2
tube punctures near valve
5
Rode on a flat tire - how do I check for possible damage?
3
Bump on tire near valve after tube replacement
3
Can a tire that blew off a rim be safely used on another rim, and under what criteria?
1
Trek FX 7.7 rear tire is rubbing the frame
6
Blowout on rear rim