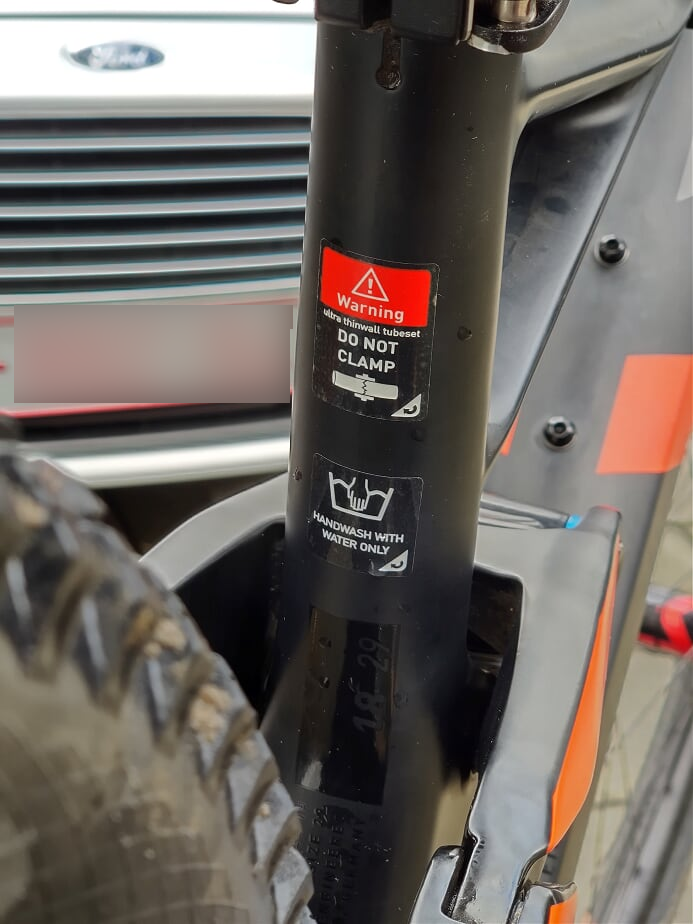 Ultra thinwall tubeset DO NOT CLAMP

Currently I clamp my bike like this, and make sure that there is nearly no force applied. The rubber on the clamp keeps it from sliding away:

Does thinwall tubeset means that the entire frame of my bike should not be clamped or only where my dropper post is? If so, how am I supposed to perform maintenance on it?

I believe that you should not clamp anywhere on a carbon-tubed bicycle. As @whatsisname discussed in this Stack Exchange post, carbon fiber can be made very strong, but if you want it to resist clamping forces, you have to specifically design it to do so. That would add weight. All our fancy carbon frames are designed to be strong in some directions only, and they are not designed to withstand clamping forces. For that matter, the tubing on aluminum frames is very thin, and I believe the general recommendation is not to clamp aluminum frame tubes either. One best practice would be get a cheap alloy seatpost and clamp that. Some discussion here from a Trek dealer in Chicago. They point out that clamps really concentrate the clamping force in a few places on the tube. So, you could be exerting more clamping force on the frame than you perceive.

Park Tools has a pro mechanic stand that clamps bikes through the front axle. If you go to the page for their home mechanic stand, the picture clearly shows them clamping a bike by its seatpost. They also suggest that you can clamp a dropper post with some precautions. The link goes to a YouTube video, and their synopsis of the issue starts at 11:00. The link should play from that time, but you can replay that video from the start if you are interested in an engineering discussion of clamping forces on seatposts.

If you search the internet, I think you'll find some people who say they've clamped their carbon frames gently without issue. They may well be right! However, the issue is that they may have caused invisible damage inside the carbon. Raoul Luescher, who repairs carbon bikes for a living, discusses that issue in this YouTube video. His discussion is not specific to clamping, but he makes the point that you can cause delamination (fancy term for a fracture) in a carbon bike from something as simple as letting it fall over at a coffee stop. Importantly, you can have a delamination that's not visible from the outside of the tube. It's possible that the delamination will propagate (i.e. get worse) over time, and then fail unexpectedly. He specifically said in the video that he gets a number of failures while "just riding along". His point is that well-made carbon fiber won't fail like this; there has to be a flaw (e.g. manufacturing process left voids, which propagated over time) or invisible damage.

Please note: this does not mean you have killed your fancy carbon frame. It merely means that clamping your frame, even lightly, is not safe in the long run.

Side note: An extremely expensive but flexible adapter solution for your stand is Silca's Hirobel, further discussed here. This supports a frame from below the top tube using rubber wheels, and it places rubber straps around the top tube. This is probably not worth it for most people. I am including this link for fun. And who knows, you might decide it's worth it in terms of hassle saved.

Not the answer you're looking for? Browse other questions tagged mountain-bike maintenance carbon clamp or ask your own question.

31
Why is carbon fiber inherently weak? Or is it?
1
Aluminium Aerobars on Carbon Handelbars

2
Cube Analog Disc vs. Cube Aim Disc
2
Seat clamp tolerance
8
Which way should a seat post clamp be oriented?
1
Does a carbon frame need two-bolt seat clamp?
0
How to exchange a seat stray on a 2013 Cube AMS 150 Super HPC Race carbon bike?
0
Seatpost clamp sizing issues?
3
Carbon taperd road fork - use crown race or not?
4
What saddle rail clamp should I get?